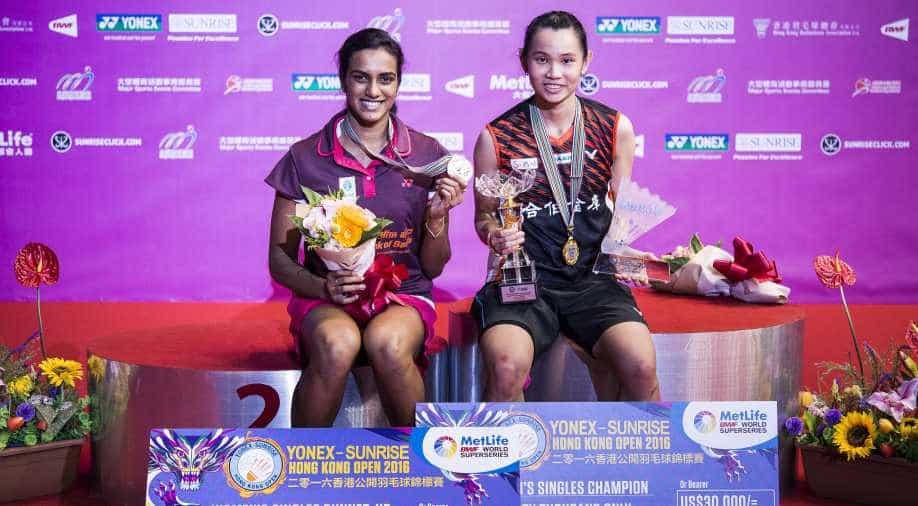 Sameer Verma, the other Indian in the final, also tripped in the final hurdle, losing to local player Ng Ka Long Angus.

The unheralded Verma had beaten world number Jan O Jorgensen of Denmark on Saturday to reach the final. But he could not repeat the same magic in the final on Sunday.

Too good for Sindhu

Sindhu, fresh from capturing the China Open in Fuzhou last week, was slow off the blocks and failed to match the pace set by the Taiwanese player, who unleashed a mix of well-timed lobs and drop shots in her 21-15, 21-17 victory.

"It was a good game overall, but it was her day," said Sindhu, who brushed off suggestions that her win at Fuzhou had left her drained in Hong Kong. "I'll go back and train hard."

Sindhu rallied in the second but was unable to establish a rhythm as Tai pulled away in the latter half of the game.

The 22-year-old stayed patient during longer rallies as her opponent struggled to reach shots and keep the shuttlecock in play.

"I like to be easy during my matches. I don`t like to put too much pressure on myself," said Tai, who booked her ticket to the final a day earlier by beating Rio gold medallist Carolina Marin.

This was Tai's second superseries win this season, having previously won the Indonesia Open title in June.

She said her eyes were now firmly set on finishing the season on top at the tour final in Dubai, a tournament she won in 2014.