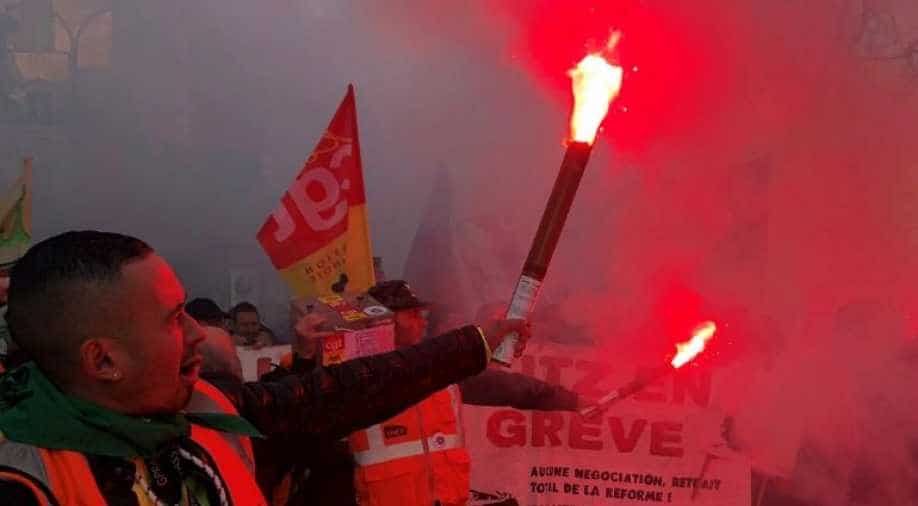 France's largest union, the reform-minded CFDT which is influential in the private sector, joined the protests for the first time on Tuesday although it did not sign the statement

French trade unions failed on Tuesday to achieve the big surge in support they had hoped for in street protests to pressure President Emmanuel Macron to ditch his pension reform, and said there would be no strike truce during Christmas.

France's transport networks were crippled and schools shut on a thirteenth day of strikes, but there was not the pick-up in faltering momentum that union chiefs had hoped for in nationwide protests, even as private-sector workers joined in.

In Paris, police fired tear gas and charged to disperse demonstrators from the Place de la Nation, though there was none of the rioting and looting that marked the "yellow vest" protests against high living costs late last year.

The hard-left unions spearheading the industrial action said in a joint statement that Tuesday's marches across France reflected a "massive rejection" of Macron's planned pension system overhaul and called for the reform to be abandoned.

"If it is not pulled, there will be no truce," the unions said.

France's largest union, the reform-minded CFDT which is influential in the private sector, joined the protests for the first time on Tuesday although it did not sign the statement.

About 615,000 people nationwide answered the union leaders' call to march on Tuesday, the interior ministry said, a significant decline since the first big day of action on Dec. 5 which had brought 806,000 onto the street, though numbers were higher in Paris.

The hardline CGT union said it had counted 1.8 million protesters nationwide, more than it had reported on December 5. Union and government tallies at French demonstrations usually show major discrepancies.

French unions oppose Macron's plans to streamline the Byzantine state pension system and prod people to work until 64, instead of the legal retirement age of 62.

In the capital, some protesters dressed in black and hiding their faces with scarves and masks, overturned bins, smashed bus stops and hurled glass bottles at police lines. Police said the clashes involved "black block" anarchists, a small minority of the otherwise peaceful protesters.

Police also charged protesters in Paris who ignored an order to disperse at the end of the route and threw at least one Molotov cocktail at police.

"We want social justice," said Veronique Ragot, 55, a striking sub-editor at a publishing house. "We've seen our social benefits melt in the sun, and this is the last straw."

The strike forced most long-distance trains, commuter trains and Paris metro lines to shut. Even the Eiffel Tower was closed. Many state schools were shut or had reduced lessons. The CGT said it was responsible for power outages and cuts to gas supply that hit thousands of homes as well as businesses.

The unions and Macron are each hoping to push the other to back down before Christmas, with the prospect that strikes over the holiday would alienate an increasingly frustrated public.

"Democratic and union opposition to our project is perfectly legitimate. But we have stated clearly what our project was, and my government is totally determined to reform the pensions system and to balance the pension system's budget," Prime Minister Edouard Philippe told parliament.

Opponents were buoyed by the departure of government pension reform tsar Jean-Paul Delevoye, who quit on Monday over his failure to declare other jobs.

French workers receive among the world's most generous state pensions through a system divided into dozens of separate schemes. Macron's government says privileges for various categories of workers make it unfair, and wants a "points" system to treat contributions from all workers equally. Unions say this amounts to an attack on hard-earned benefits.

"When all the unions say 'We do not want this reform', the government should have a rethink," said Philippe Martinez, head of France's CGT union, leading a column of demonstrators in Paris's Republic Square. "They need to open their eyes and unblock their ears."