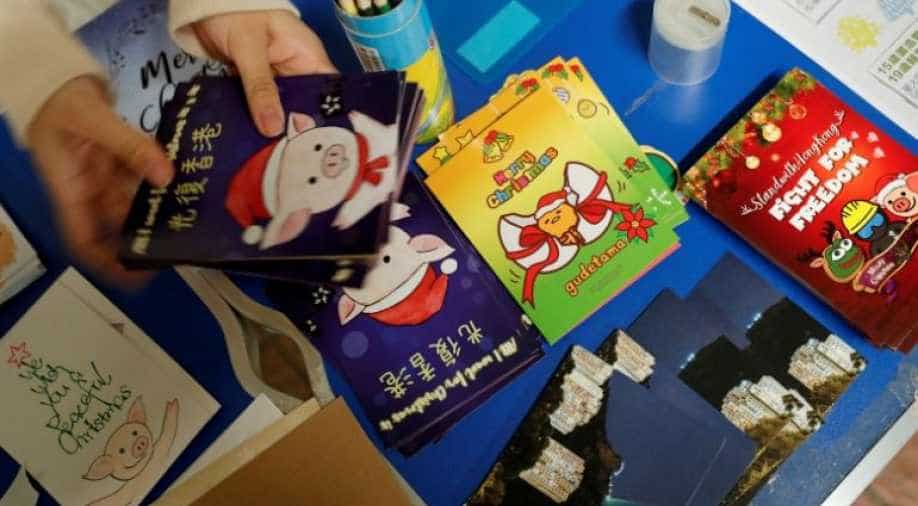 An organiser arranges Christmas cards for people who are in detention during the recent protests in Hong Kong, China December 13, 2019. Photograph:( Reuters )

Hong Kong residents have been gathering across the city on weekends and in lunch breaks to write Christmas cards to injured protesters and those in detention as anti-government demonstrations grind on through the holiday season.

"I don't even want to celebrate because so many people are seriously injured," said office worker Felix Wong, 35, choking up in tears as she spoke.

"We didn't forget about them. We're not partying 'We can celebrate later, not now'," she said when asked what she had written in her cards.

Wong was one of a dozen office workers and residents who dropped by a central shopping area on Monday to drop off their Christmas cards.

Volunteers in black masks and baseball caps collected them in boxes as tourists walked by, passing shop windows decorated with gingerbread houses, Christmas presents, and tinsel.

Hong Kong has been embroiled in more than six months of anti-government protests which show no sign of abating. Police have arrested 6,060 people since the unrest began, with 977 charged with various offenses including unlawful assembly, common assault, and criminal damage, as of December 12.

The ages of those arrested range from 11 to 84, according to police. Police do not say how many of them are in detention.

On the weekend, a line of people waited at the entrance of the train station in the Mong Kok district to drop off their cards at a booth manned by volunteers and equipped with screens showing videos of clashes with police.

Bonnie Lock, a 52-year old housewife, dropped off her card with a crowd of her neighbours.

"As Christmas and Chinese New Year approaches, I want to show some support, to let them know that we, the peaceful protesters miss them very much," Lock said.

"We hope they can feel some warmth and won't feel that lonely."

The protesters are angry about what they see as an encroachment by China on wide-ranging autonomy Hong Kong was guaranteed under a "one country, two systems" framework which governs the former British colony.

China has rejected the complaints.

Protests are scheduled to continue across the city through the rest of the week and into Christmas.