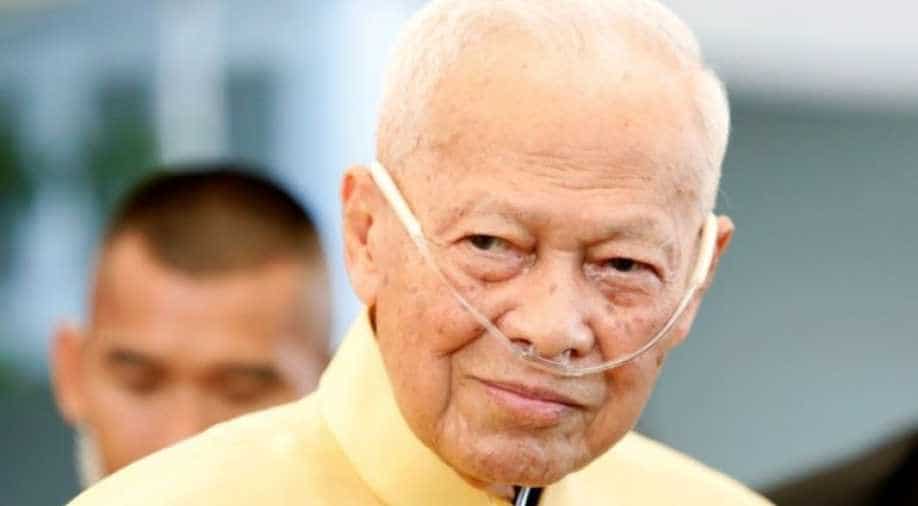 Prem had served King Maha Vajiralongkorn and his late father King Bhumibol Adulyadej as a chairman of the prestigious Privy Council.

"I would like to ask everyone to stand for a moment in memorial."

Hailed as a stabilising force by allies but loathed by critics as a conservative underminer of democracy in the kingdom, Prem was a top aide to the late beloved King Bhumibol Adulyadej and helped cement the unshakeable bond between the monarchy and the military.

As Privy Council president his influence endured through a tense succession period after Bhumibol died in 2016 and Prem was briefly appointed regent before Bhumibol's son Maha Vajiralongkorn ascended the throne.

Prem presided over the king's surprise wedding to Queen Suthida days before his coronation earlier this month.

With assistants helping him stand, he took part in a key sacred water ritual on coronation day alongside 2014 coup leader and junta chief Prayut-Chan-O.

The participation highlighted his legacy of cementing the army's self-designated role as protector of the royals.

The general helped establish the all-powerful "monarchised military" seen in Thailand today, according to Paul Chambers, lecturer at Naresuan University in Thailand.

"Prem proved time and again that his savvy acumen could prevent or facilitate army coups that helped the palace," Chambers told AFP.

Born in southern Songkhla province in 1920, 12 years before Thailand's absolute monarchy was abolished, Prem experienced most of modern Thai history.

He graduated from the country's top military academy in 1941, showcasing his talent on the frontline by fighting the French in Cambodia and later the British in Burma.

He was a key figure in the kingdom's battle against communists in its northern provinces and was rewarded with the top job of army chief in 1978.

But the ambitious commander only held the position for two years before seizing power in what was widely viewed as a silent coup.

His 1980-1988 rule as premier brought a rare period of political and economic stability to Thailand thanks to his patronage of military officers but most importantly through the trust he forged with Bhumibol.

The bachelor general cultivated loyalty in the military despite two counter-coup attempts.

He helped instigate three coups including the one in 2014, according to Chambers, while indirectly assisting in the ouster of four other governments.

Prem was credited by some for opening up some space for democratic politics when he eventually stepped down for an elected premier to take office.

But when he was soon after appointed member and later president of the super-elite Privy Council, an inner circle of advisers to the king, Prem became a figure of revulsion in Thailand's pro-democracy camp.

Anger over his influence boiled over after the 2006 coup that ousted former premier Thaksin Shinawatra when his supporters accused Prem of masterminding the putsch.

In a symbolic meeting several months after the May 2014 putsch, Thailand's junta chief Prayut visited Prem at his home in a widely photographed trip.

Prem leaves Thailand amid ongoing political tensions a junta-backed party fronted by Prayut closes in on the premiership after March elections widely seen as tilted in military's favour.