Exceptional success, we achieved our goals in the operation, says Netanyahu after ceasefire with Hamas 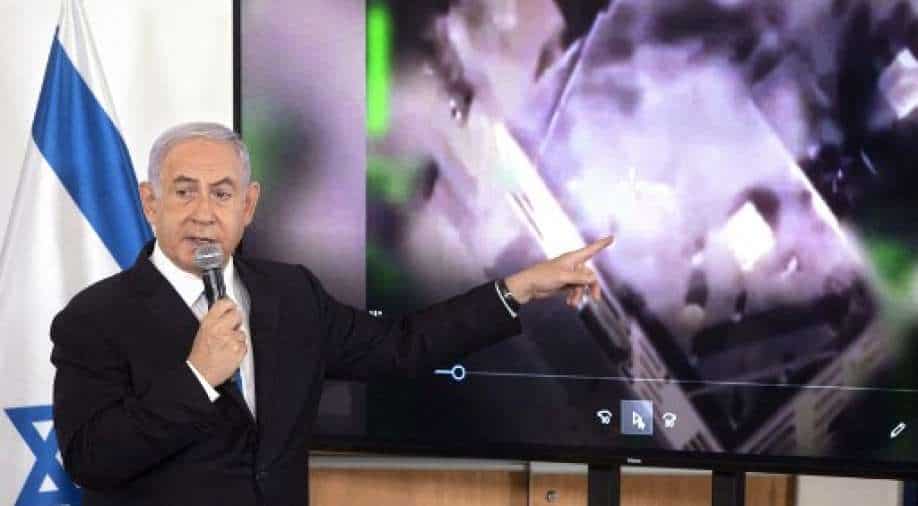 Israeli PM Benjamin Netanyahu shows a slideshow during a briefing to ambassadors at the Hakirya military base in Tel Aviv Photograph:( AFP )

Israel's defence minister Benny Gant warned Hamas it would pay a "heavy, very heavy" price if it broke the ceasefire.

After the declaration of ceasefire between Israel and Hamas, Prime Minister Benjamin Netanyahu said that the operation was an "exceptional success".

"We achieved our goals in the operation," the Israeli PM said, adding that the airstrikes had killed "more than 200 terrorists" in Gaza including senior commanders.

Israel's defence minister Benny Gant warned Hamas it would pay a "heavy, very heavy" price if it broke the ceasefire.

However, amid the peace, clashes broke out between Palestinians and Israeli police outside Jerusalem's Al-Aqsa mosque compound. The Palestinian Red Crescent said at least 21 people were hurt after Israeli forces reportedly fired rubber bullets and stun grenades at the Palestinians

However, the situation was brought under control later in the day.

Egypt said it was monitoring the situation after brokering the ceasefire as residents in Gaza welcomed the peace deal and began clearing the rubble left behind after 11 days of large scale bombardment by the Israeli jets.

The European Union on Friday welcomed the ceasefire as the United Nations Relief and Works Agency for Palestine Refugees in the Near East(UNRWA) sought to help the homeless while adding that it would assess physical damage to infrastructure.

Meanwhile, the US State Department said US Secretary of State Antony Blinken will travel to the Middle East to Israeli, Palestinian and regional counterparts as US President Joe Biden said the ceasefire was a "genuine opportunity" for peace.

"I believe we have a genuine opportunity to make progress and I'm committed to working toward it," the US president said.