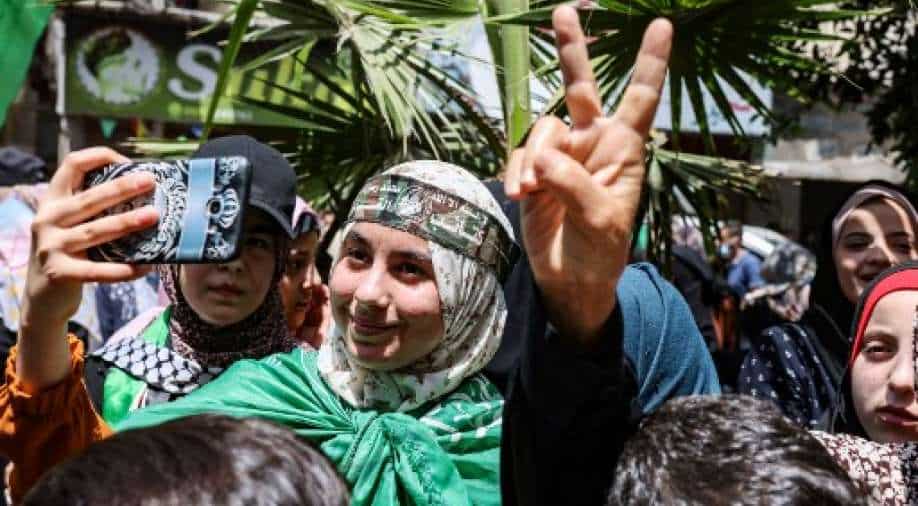 Palestinian supporters of Hamas celebrate after a ceasefire brokered by Egypt between Hamas and Israel in southern Gaza Strip Photograph:( AFP )

Both Israel and Gaza are claiming victory. In Gaza, there were cheers and whistles last night as residents took to the streets and they were joined by senior Hamas officials.

Tensions between Israelis and Palestinians escalated two Fridays ago. On May 7 to be precise. However, before one could take stock, fighting broke out which was the worst since 2014.

The conflict lasted 11 days and killed at least 255 people while keeping the world on its toes.

In total, over 4,300 rockets were fired from Gaza. Israel, in turn, bombarded Gaza Strip as 243 people died and more than 100 were women and children.

In Israel, 12 people died including an Indian woman and two Thai nationals. At one point, an all-out war seemed inevitable.

But 11 days of non-stop violence later, the exchange of fire has finally ended after Israel and Gaza agreed to a ceasefire.

An emergency meeting of the UN General Assembly was called. On the agenda was the Israel-Gaza violence.

As countries called for an immediate ceasefire, Israel equated Hamas to the Nazis.

Palestinian Foreign Minister Riyad al-Malki addressed the assembly. He questioned Israel's use of force and called it a colonising power.

A little later, Israel's PM Benjamin Netanyahu announced that his security cabinet has approved the Egyptian-mediated proposal to end violence.

Hamas quickly responded and said it would honour the deal and a ceasefire was announced even as celebrations broke out in Gaza, Jerusalem and as far away as New York.

The ceasefire came into effect at 2:00 am (local time).

As the fighting ended, a narrative war began and it began with one question - who won this battle?

Both Israel and Gaza are claiming victory. In Gaza, there were cheers and whistles last night as residents took to the streets and they were joined by senior Hamas officials.

However, Israeli PM Netanyahu said: "To the citizens of Israel, at the beginning of my speech I would like to thank you for standing strong and for the outstanding strength that you showed during the 11-day campaign that allowed us to accomplish the goals of the campaign with outstanding success.

Netanyahu's message was loud and clear - he says Israel won.

Meanwhile a Hamas leader told the media that Israel has made a concession. It's a promise to "lift their hand off Sheikh Jarrah and al-Aqsa mosque".

However, Israel has denied it. Both Israel and Gaza have been trying to tell the world that they have won.

It's a war of narratives and it is being fought on numerous fronts and social media is one of them. It has been quite a lethal battle in the last couple of weeks. Israel has tried to capitalise on its widely-followed handles online. It has fired rockets on Twitter, put up emotionally charged messages.

Palestinians, on the other hand, have been capitalising on the momentum gained from a viral campaign with #SaveSheikhJarrah.

The narrative war is also being fought on the streets. over the weeks, there have been pro-Israel, and pro-Palestine rallies in countries across the world.

One such rally turned deadly today.

In Pakistan, six people were killed in an explosion. Reports say the target was a local leader who was on his way to attend a pro-Palestine rally.

Another weapon in the narrative war are speeches by leaders on what each side have been telling the world.

Israel continues to maintain that it is a nation under attack - a nation that's being forced to defend itself. As for Hamas, it claims to have exposed Israel and shown the world how Israel does not mind killing women and children.

It was the fourth time that the violence between Hamas and Israel escalated to such deadly heights.

While a ceasefire is a start, it is not a solution to a problem that is intertwined in history, geography, identity and religion. The region needs a resolution and unless there is one, West Asia will continue to be hit by repeated waves of violence.