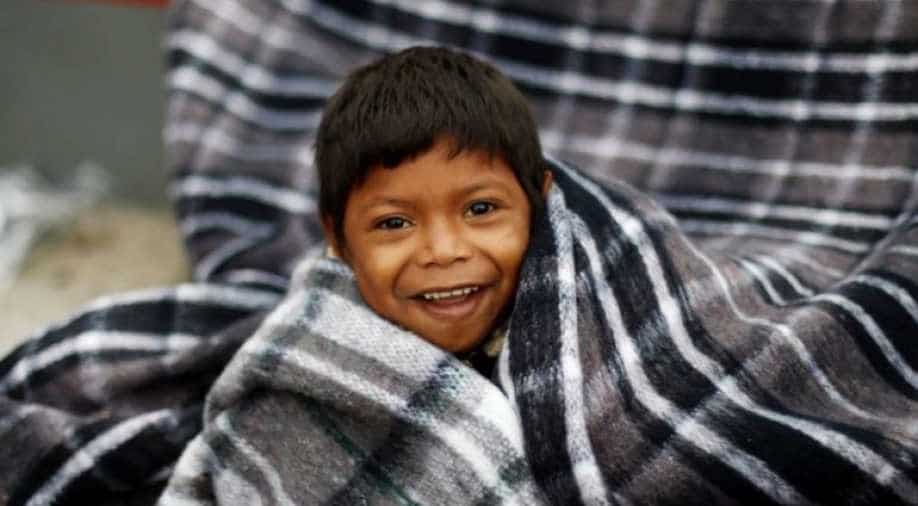 Jose, 7, from El Salvador and who traveling with a caravan of migrants from Central America, smiles after waking up near the San Ysidro check-point after a small group of fellow migrants entered the United States border and customs facility, where they are expected to apply for asylum, in Tijuana, Mexico April 30, 2018. Photograph:( Reuters )

Despite Trump's threats, earlier on Monday Vice President Mike Pence admitted the caravan members would be processed in line with the law

Eight women and children from a Central American caravan entered US&nbspterritory to seek asylum on Monday, sparking celebrations among companions after a month-long trail across Mexico that led President Donald Trump to demand changes in the law.

Carrying scant possessions, the asylum seekers walked through a door into the San Ysidro port of entry on the bidding of a Customs and Border Patrol (CBP) officer.

The first to enter was part of a small group from the caravan who Mexican officials let walk over a pedestrian bridge on Sunday and who have been camped at the San Ysidro gate ever since when the CBP said the facility between Tijuana and San Diego was saturated.

A larger group of about 150 people has not been let onto the bridge and was preparing for a second night sleeping in an open plaza on the Mexican side. Hoping they would also be let through to make their case, members of the group pumped fists and cheered when they heard some of their companions had crossed.

The caravan has been in the spotlight ever since it began a more than 2,000-mile (3,200 km) journey from southern Mexico, gathering 1,500 people at one point, to the fury of Trump, who demanded that officials do not let such groups into the country.

His administration's hands are tied, however, by international rules obliging the United States to accept asylum applications.

Despite Trump's threats, earlier on Monday Vice President Mike Pence admitted the caravan members would be processed in line with the law.

Fleeing what they say are death threats, extortion and violence in neighbourhoods controlled by the powerful Mara street gangs, once in the United States the asylum seekers must convince officials they have reason to fear to return home.

The majority of asylum claims by Central Americans are ultimately unsuccessful, resulting in detention and deportation. The Trump administration says many claims are fake, aided by legal loopholes.

"We began processing undocumented arrivals again on Monday, a CBP spokeswoman said, adding that the number of individuals they could process in a day varied and that the other asylum seekers may have to wait in Mexico until more space was freed.

"As in the past when we’ve had to limit the number of people we can bring in for processing at a given time, we expect that this will be a temporary situation," she said.

By the time it reached the US&nbspborder the caravan had dwindled to a few hundred people but was still large enough to prompt comments from Trump and Pence on Monday.

Pence said US&nbsplaws needed to change to remove "incentives" for migrants and he accused immigration activists of encouraging members of the caravan into leaving their homes.

"These families, often women with small children, are victims, they are victims of open border advocates," Pence said during an inspection of new border fencing a few hours drives from San Diego.

Only two of the dozens of people in the caravan who spoke to Reuters over the past month said they were aware of it before they left home. Those two said the caravan's existence did not influence their decisions to flee what they described as appalling conditions.

Shaken and elated by the sudden turn of events, the remaining 15 women and children at the gate waited to see if the officer returned to let more through. Ayde Hernandez, from Guatemala, beamed and said she hoped she was next.

An immigration lawyer advising the group cried with relief as one boy passed through.

"I'm a lawyer, I'm not supposed to cry, (but) I've been with that boy for two days," she said, declining to give her name.

Asked by Mexican authorities to take down a makeshift tarpaulin roofing as night fell, they huddled close against the deepening cold to talk of what would come next, their children nodding asleep.

Until now, waiting near the gate for the past 24 hours had been the worst part of the journey, said Luisa Cruz, 44, from Nicaragua, which she had fled with her daughter after a case of domestic violence.

"No way to go to the bathroom, and the hunger, and the cold," she croaked, through a sore throat.

Asylum seekers must demonstrate a well-founded fear of persecution at home, most often from a state entity. Central Americans fare badly in such claims because the state is rarely seen as directly responsible for the life-threatening situations they leave behind.

US&nbspborder authorities say some people associated with the caravan were caught trying to slip through the border fence.

On Monday, Trump railed against a system that may see some of the caravan members freed in the United States until their cases are resolved because a shortage of beds at detention centres and rules that limit how long women with children can be held.

"Catch and release is ridiculous. If they touch our property, if they touch our country, essentially you catch them and you release them into our country. That's not acceptable to anybody, so we need a change in the law," he said.