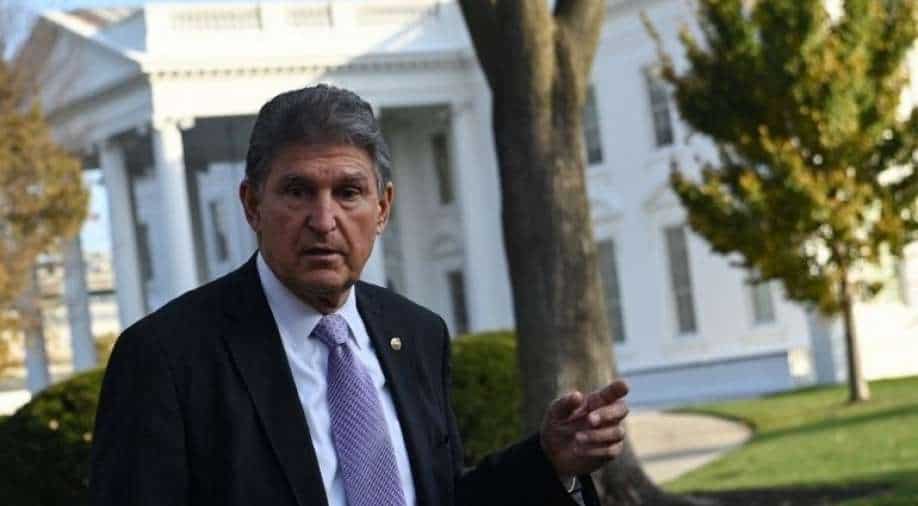 US Senator Joe Manchin (D-WV) is seen walking past the White House to a meeting in the Executive Office Building in Washington, DC Photograph:( AFP )

Private talks this week between Biden and Manchin, who is pushing to curtail the scope of the package and shrink its price tag, have failed to resolve crucial differences, according to White House officials and congressional aides

Democrats privately conceded Wednesday that they were all but certain to delay consideration of President Joe Biden’s $2.2 trillion social policy bill in the Senate until 2022, missing a self-imposed Christmas deadline as negotiations with a key centrist holdout, Sen. Joe Manchin of West Virginia, sputtered.

Private talks this week between Biden and Manchin, who is pushing to curtail the scope of the package and shrink its price tag, have failed to resolve crucial differences, according to White House officials and congressional aides. And leading Democrats have yet to complete work on the complex social safety net, climate and tax package.

Many White House aides have grown frustrated with the pace of the discussions, although still optimistic that the bill will pass next year. Administration officials had expressed confidence earlier this month that an agreement with Manchin was close, but their enthusiasm had faded by Wednesday, after two days of calls between Biden and the senator produced no breakthroughs.

Asked if the legislation could be finished this year, Biden told reporters Wednesday: “I hope so. It’s going to be close.”

Several administration officials said privately this week that they now expect the legislation, which passed the House earlier this year, to slip into next year, perhaps into the spring.

“It’s our long-standing rule not to discuss the specifics of private discussions with lawmakers, but the president and Sen. Manchin have had productive and friendly conversations,” said Andrew Bates, a White House spokesperson, who denied that Biden was frustrated with the process.

A senior administration official said White House aides continued to push hard to secure a deal on the legislation and predicted that Biden would ultimately find a way to pass the bill — as he did with an economic stimulus measure in March and a bipartisan infrastructure bill this fall.

While final decisions have not yet been made, party leaders have quietly backed away from their Christmas deadline in recent days. Sen. Chuck Schumer, D-N.Y., the Senate majority leader, said Wednesday that Democrats “continue working on getting the Senate into a position where we can vote on the president’s ‘Build Back Better’ legislation,” without a mention of the holiday or any timetable for doing so.

With hopes of a quick victory on the social policy bill fading, Democrats were weighing a renewed push to prioritize voting rights legislation, long stalled by Republican opposition, before the end of the year.

“I would like to see ‘Build Back Better’ dealt with as quickly as possible, but if we can’t deal with it right now, it’s far more important that we deal with the voting rights issue,” said Sen. Bernie Sanders, I-Vt., chair of the Budget Committee.

But the prospect of a delay frustrated liberal Democrats, who had already been wary that centrist Democrats would dash their ambitions for passage of the bill after shepherding through a bipartisan infrastructure measure.

It was a scenario that several Democrats had sought to avoid: that after allowing the infrastructure bill to pass and agreeing to substantially pare down their marquee domestic policy bill to appease Manchin and other centrists, they would come away empty-handed. With Republicans united in opposition to the package, Democrats cannot move forward in the evenly divided Senate without the support of all 50 lawmakers who caucus with them.

“I’m still hopeful that it will pass. I’m not going to have a post-mortem on something that hasn’t died,” House Speaker Nancy Pelosi, D-Calif., said at her weekly news conference. “I think we will have legislation and it will pass. I hope the sooner the better, especially since we had certain deadlines.”

The most notable dispute between Manchin and Biden, according to multiple people familiar with the discussions, remains a proposal to extend an expanded $300 monthly payment to families with children for another year. Manchin voted in March to expand the payments, a signature component of the $1.9 trillion pandemic aid bill that has helped reduce child poverty, and Democrats hoped to expand the payments for another year.

One person briefed on the talks between Biden and Manchin said the senator had proposed outright eliminating the expanded payment, which would jeopardize the support of other liberal Democrats. Other officials, who spoke on condition of anonymity to disclose details of private conversations, said that Manchin had raised concerns about exacerbating inflation trends, the lack of a work requirement to qualify for the payments and additional costs should the subsidy be expanded beyond the current one-year timeline.

Manchin grew irritated Wednesday when pressed on whether he supported the expanded credits, offering a profane denial that he opposed the provision and dismissing what he called “bad rumors.”

The final payments of the year were sent to families Wednesday, and administration officials had cautioned that the extension needed to become law before the end of the month to avoid a lapse.

Outside of Manchin’s concerns, Democrats were still scrambling to finalize the legislation and resolve outstanding policy differences, including an unfinished compromise on raising the cap on state and local tax deductions.

Because the package is being muscled through Congress using the fast-track budget reconciliation process, which shields fiscal legislation from a filibuster, it is subject to strict rules governing what can be included. Democrats are still working feverishly to ensure that every provision can pass muster with the Senate parliamentarian. Guidance has yet to be issued on a number of key proposals, including immigration provisions, as Republicans seek to challenge their inclusion under the rules.

But Democrats have focused on Manchin, whose concerns have already prompted them to drop or modify several of the measure’s key components, including jettisoning anti-climate change provisions and dropping a federal paid and family medical leave benefit.

Having pushed for a lower price tag, he also repeatedly raised concerns about how the package would affect inflation and the economy.

“He has made some dramatic changes in this bill and its contents and its total,” Sen. Dick Durbin of Illinois, the No. 2 Democrat, told reporters earlier this week. “I’ve told him, ‘Joe, you’ve got your mark on this bill, now close the deal.’ I still feel that way.”