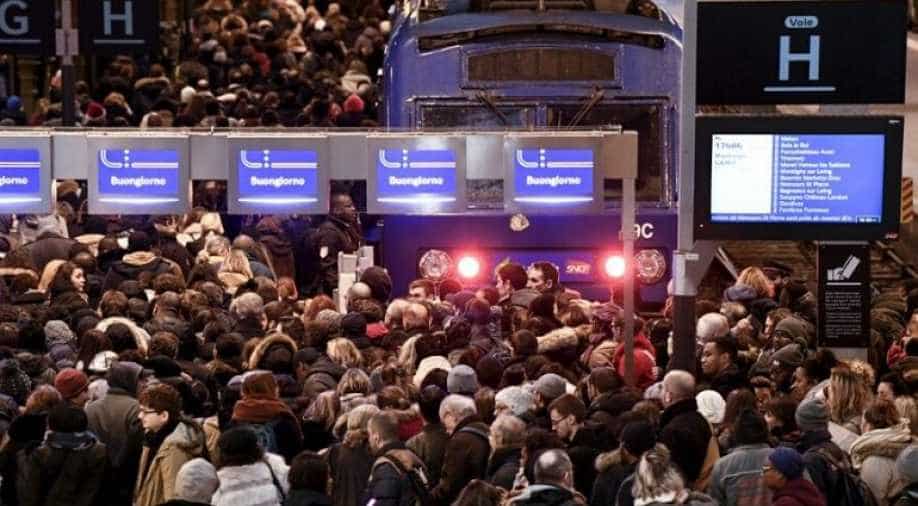 Many travellers are reconsidering their holiday travel plans as unions stood united in their opposition to the government's plans to fuse the country's 42 pension schemes into a single, points-based system.

French commuters gritted their teeth on the ninth day of a crippling public transport strike Friday, pinning their hopes for an end to the daily misery on the government's offer of fresh negotiations with unions over a contested pensions overhaul.

Many travellers are reconsidering their holiday travel plans as unions stood united in their opposition to the government's plans to fuse the country's 42 pension schemes into a single, points-based system.

"It is very complicated," 23-year-old childcarer Elsa told AFP at Paris' Gare de Lyon station, complaining of the overcrowded trains. Every day since the strike started, she has had to get up early to not miss her train into town, then walk a long way to work.

"If this (the strike) goes on, I will have to keep doing this. It is exhausting, but I have no choice. Not all work can be done from home."

The overhaul unveiled by Prime Minister Edouard Philippe this week angered even the moderate CFDT union by proposing a reduced payout for people who retire at the legal age of 62 instead of a so-called "pivot age" of 64 - a "red line" for unions.

They called for new mass demonstrations for Tuesday, the third since the action started on December 5 in the biggest show of strength in years by France's notoriously militant unions, which have vowed to continue fighting through the holidays if necessary.

Philippe said Thursday that he would call union leaders to "quickly resume the dialogue" and proposed talks "as soon as possible next week."

"My door is open and my hand outstretched," Philippe said on Twitter.

President Emmanuel Macron, who has spoken little about a centrepiece of his far-ranging reform drive for France, told reporters in Brussels Thursday that "now is the time for consultations."

But Laurent Brun of the hard-line CGT union, the largest among public-sector workers including those at rail operator SNCF, has already warned that "There won't be any Christmas truce" unless the government drops the plan entirely.

The reform will scrap early retirement and other benefits for mainly public-sector workers - particularly those at state rail operator SNCF and the Paris public transport group RATP.

A poll released Thursday by the Elabe institute found France evenly divided on Philippe's plan, with 50 percent for and 49 percent against.

But 54 percent rejected the mooted "pivot age" of 64 for a full pension, it found, and 54 percent supported the protest even as patience wore thin on Paris' overfull public transport lines and in the jam-packed streets where pedestrians, cars, motorcycles, bikes and scooters jostled for space.

In Paris, eight of the 16 metro lines were shut down completely Friday and six were offering interrupted service, according to the RATP.

The city's bus service was again severely disrupted, and the number of trains connecting Paris to its suburbs was slashed, as was the national train service.

Staff at four of France's eight oil refineries were on strike, affecting output and raising fears of shortages down the line.

The strike has affected international travel and the bottom lines of hotels, restaurants and shops, mainly in Paris, where theatre and opera performances have been cancelled, and museums have had to close some exhibits.

A week earlier, some 800,000 people hit the streets across France to kick off the pension reform mass resistance, followed by some 339,000 on Tuesday.

Unions are hoping for a repeat of 1995, when weeks of rail strikes forced the government of then-president Jacques Chirac to withdraw a pension reform.

Macron's government insists the changes will make for a fairer system and help erase pension system deficits forecast to reach as much as 17 billion euros ($19 billion) by 2025.

The average French person retires at just over 60, years earlier than most in Europe or other rich OECD countries.