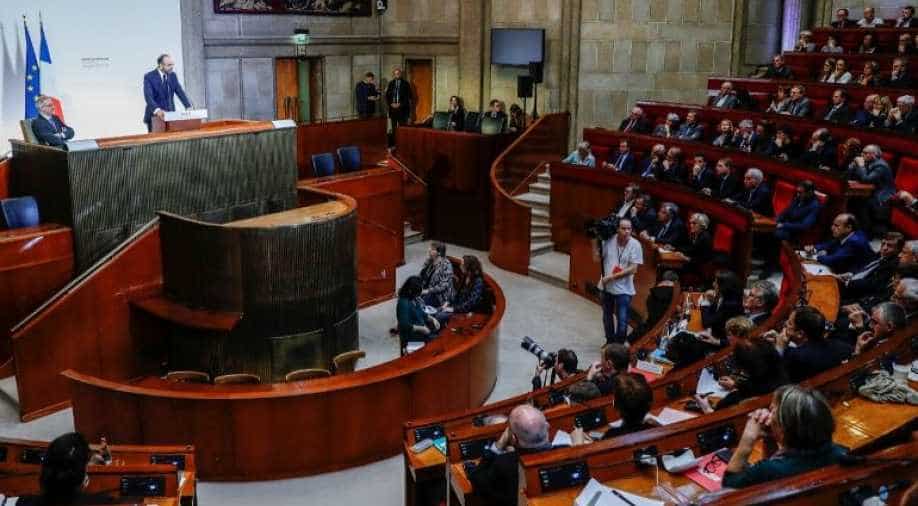 France would replace the system of more than 42 separate state-funded plans with a universal, points-based system that will apply to those entering the job market for the first time in 2022.

Prime Minister Edouard Philippe defied striking workers on Wednesday with plans for a long-anticipated overhaul of France's byzantine pension system that he said would be fairer and encourage people to work longer.

France would replace a convoluted system of more than 42 separate state-funded plans with a universal, points-based system that will apply to those entering the job market for the first time in 2022, Philippe said in a speech that followed days of protests and strikes.

He did though show some flexibility to unions over the timing of the implementation of the plan, saying anyone within 17 years of retirement would be exempt.

"The time has come to build a universal pension system," Philippe said in a much-anticipated speech. "There is no hidden agenda. "We want to protect the purchasing power of the workers and pensioners of today and tomorrow."

The legal retirement age would remain at 62, the prime minister said, but workers would be incentivised to work longer through a system of bonuses and discounts.

There would be a minimum pension of 1,000 euros per month for those who worked a full career.

Reform of France's pension system, which offers some of the most generous benefits in the industrialised world, has proven a treacherous task for past and present governments.

A strike by public sector workers over the past week has crippled France's transport network, closed schools and forced the cancellation of some flights.

The strongest opposition to the planned reform has come from workers with 'special benefit' plans, including rail employees, dockers and Paris Opera singers who are entitled to retire on a full pension years before the average retirement age of 62.

Philippe said a universal, points-based system would be fairer, giving every pensioner the same rights for each euro contributed, and enable workers to move more freely from one job to another in the modern-day labour market.

"We know our children won't have the same linear careers we had and we need a pension system that allows that. We need to have faith in a system that is not deemed to favour one person over another."

Philippe said that under the new system, every hour worked will earn pension rights, which will benefit gig economy workers such as bicycle courriers and office cleaners, who often do not earn enough to lock in pension rights under the current system.

With the strike over the reform in its second week, there were signs of mounting irritation among morning commuters as they grappled with a skeleton train and metro service in the capital, Paris.

"I've had it today," said one frustrated traveler as he battled his way through a crowded platform.

Before the prime minister's speech, hard-left unions showed no sign of backing down in a battle of political will that could make or break Macron's presidency. The CGT union has called for further protests on December 12 and December 17.

Taiwan needs a seat at WHO, here's why

US plans sales of top-end fighter jets to UAE: Lawmaker