Australia: Qantas CEO gets pie on his face, keeps his cool 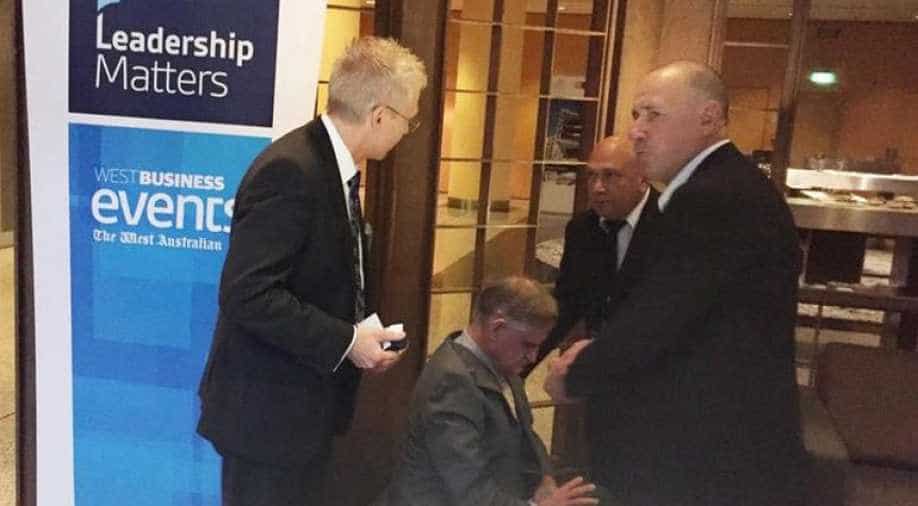 A man is detained by security after throwing a pie at Qantas CEO Alan Joyce during a speech at a hotel in Perth. Photograph:( Reuters )

Qantas Airways Ltd Chief Executive Alan Joyce proved he was no cream puff on Tuesday, keeping his cool after a man smeared a cream pie in his face during a business breakfast in Australia's west.

Joyce, the head of Australia's flag carrier, was speaking at the event in Perth, capital of Western Australia state, when a man in a business suit walked onto the stage, reached around to rub the pie in his face, and calmly walked away, 7 News television showed.

The unidentified man's motive was unclear but he was soon apprehended by security guards. State police later confirmed that officers had been called to an assault at a Perth hotel and that one person was in custody.

Joyce at first appeared stunned by the incident but quickly regained his composure to tell the audience he did not know why he had been targeted, Australian media reported, before leaving the stage to clean up.

He later told reporters he had been unable to identify what flavour pie he had been hit with.

"My issue is I need a good dry cleaner before I leave Perth, so if you have one, please recommend it to me," he said.

Long a slapstick comedy favourite, the pie-in-the-face routine has also developed as a form of political protest.

News Corp boss Rupert Murdoch was famously hit in the face with a pie while he testified before a British parliamentary inquiry into a phone-hacking scandal in 2011.