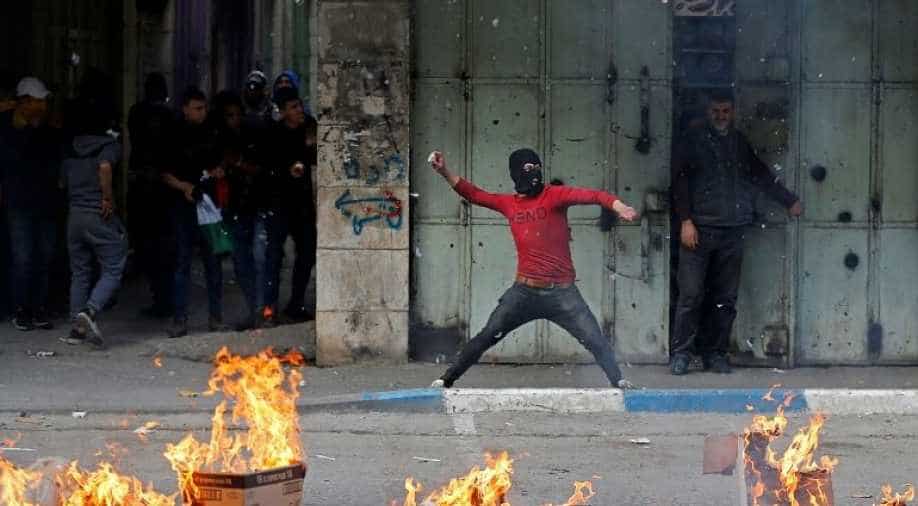 A Palestinian hurls stones at Israeli troops during a protest against the US President Donald Trump’s Middle East peace plan, in Hebron in the Israeli-occupied West Bank Photograph:( Reuters )

The peace proposal announced by US President Donald Trump on January 28 would give Israel the disputed holy city of Jerusalem and nearly all the occupied land on which it has built settlements.

At least two Palestinians were killed in the occupied West Bank and 16 Israelis were hurt on Thursday in a surge of violence that erupted amid Palestinian anger at a US peace plan.

In Jerusalem, an Arab citizen of Israel was killed after he shot and slightly wounded an Israeli paramilitary border policeman at an entrance to the walled Old City, Israeli authorities said, calling the attack politically motivated.

The peace proposal announced by US President Donald Trump on January 28 would give Israel most of what it has sought during decades of conflict, including the disputed holy city of Jerusalem and nearly all the occupied land on which it has built settlements.

With violence on the rise, the Israeli military said it was sending reinforcements to the West Bank, where Israeli troops in the city of Jenin shot dead a 19-year-old man during clashes. Palestinians said he had thrown rocks at soldiers who came to demolish the home of a Palestinian involved in the 2018 killing of a Jewish settler.

In a separate incident in Jenin, a Palestinian officer in the police station was killed by what Palestinian authorities said was Israeli gunfire. Israeli officials did not comment, and Israeli media reported he was shot by troops by mistake.

In a scene reminiscent of a wave of Palestinian street attacks in 2015, a car ran down Israeli soldiers on a Jerusalem sidewalk, injuring at least 14 of them, Israeli police said.

The assailant fled and was arrested later in the day, the Israeli military said, without immediately identifying the driver. Israel's YNet news website identified him as a 25-year-old Palestinian.

On a road to a Jewish settlement in the West Bank, a suspected Palestinian gunman slightly wounded an Israeli soldier before fleeing, the Israeli military said.

Palestinian President Mahmoud Abbas condemned Israel for the deaths, linking them to what Trump has billed as the "deal of the century".

Trump senior adviser Jared Kushner, the face of the US plan, said Abbas bore some responsibility for the surge in violence.

"I think he does have responsibility," Kushner said of Abbas moments after briefing United Nations Security Council ambassadors on the plan's details. "He calls for days of rage in response and he said that before he even saw the plan."

Kushner added that he met personally with Abbas four times as he was crafting the proposal, but "they chose not to meet with us again."

The Palestinians, who have long shunned the Trump administration, accusing it of bias towards Israel, say the plan falls far short of their demands for a viable independent state and other rights.

Israel supports the Trump plan. The Arab League opposes it, while the European Union has rejected parts of it.

"We will do everything necessary to protect our security, to define our borders and to ensure our future," Netanyahu said in a statement. "We will do it with you or without you."

On Wednesday, Israeli troops shot dead a 17-year-old Palestinian elsewhere in the West Bank, saying he had thrown a firebomb at them during a violent protest against Trump's plan. He was the first fatality since the blueprint was announced.

The Israel-Gaza border has also been shaken by several days of violence.