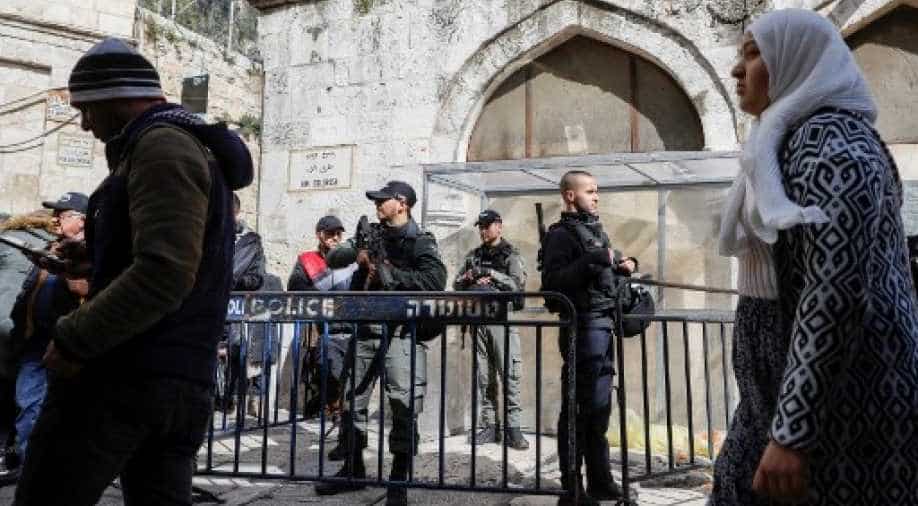 Members of the Israeli security forces stand guard in the old city of Jerusalem Photograph:( AFP )

At least 14 persons were injured after a car hit Jerusalem's First Station, known for bars and restaurants.

The Israeli Army said it was the target of attack in the car ramming incident on Wednesday.

"During the incident, a terrorist sped his car towards (Israeli) soldiers who marched adjacent to the First Station in Jerusalem as part of a military activity," the army statement said.

After the incident, Israeli police had said it was being investigated as a  "terror attack".

"Police responded to an incident when a vehicle struck a number of people and fled the scene. The incident took place at 1:45... Police units and medics arrived at the scene and are searching for the vehicle. The incident is being investigated as a terror attack," Rosenfeld said.

At least 14 persons were injured after a car hit Jerusalem's First Station, known for bars and restaurants.

The suspect had fled the scene after the crime, the police immediately launched a manhunt to nab the culprit, Israeli police said.

"Due to the nature of the incident, United Hatzalah's Psychotrauma and Crisis Response Unit were dispatched to the scene and treated eight people who were suffering from emotional or psychological shock," the medical staff said in a statement.

No group or person has taken responsibility for the attack so far.