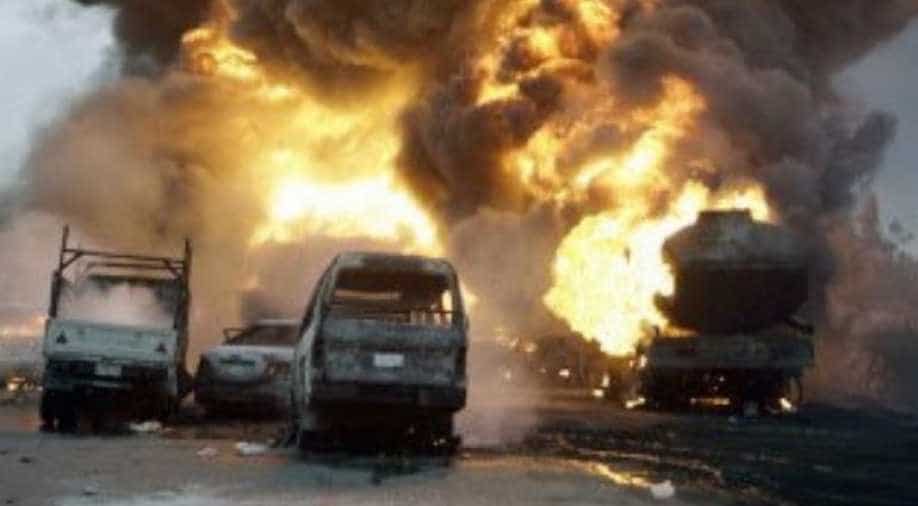 The truck overturned close to shops as it was travelling through the village of Ahumbe in Benue state on Monday.

At least 10 people were killed and more than 50 injured in central Nigeria when a petrol tanker crashed off the road and exploded as people gathered fuel, the emergency services said on Tuesday.

The truck overturned close to shops as it was travelling through the village of Ahumbe in Benue state on Monday.

Local residents rushed to collect the leaking gasoline but the fuel exploded, causing a blast that tore through the surrounding area.

"We have removed at least 10 dead bodies from the scene of the incident while over 50 people were affected," Benue state Federal Road Safety Commission Sector Commander Aliyu Baba told AFP.

"Owing to the nature of the inferno, I am afraid more discoveries might be made today as rescue efforts continue."

A local council spokesman put the number of dead much higher at 64, but police refused to confirm any toll.

Witness Paul Otukpa said a 14-seater bus was engulfed by the blast, leaving only one survivor.

Petrol tanker and pipeline blasts are common in Nigeria, where despite the country's multi-billion-dollar oil and gas industry, most people live in poverty.

In January, at least eight people were killed in Odukpani, in the southeastern state of Cross River, in an accident of this kind.

In July 2012, at least 104 people were killed and some 50 others injured in the southern state of Rivers.