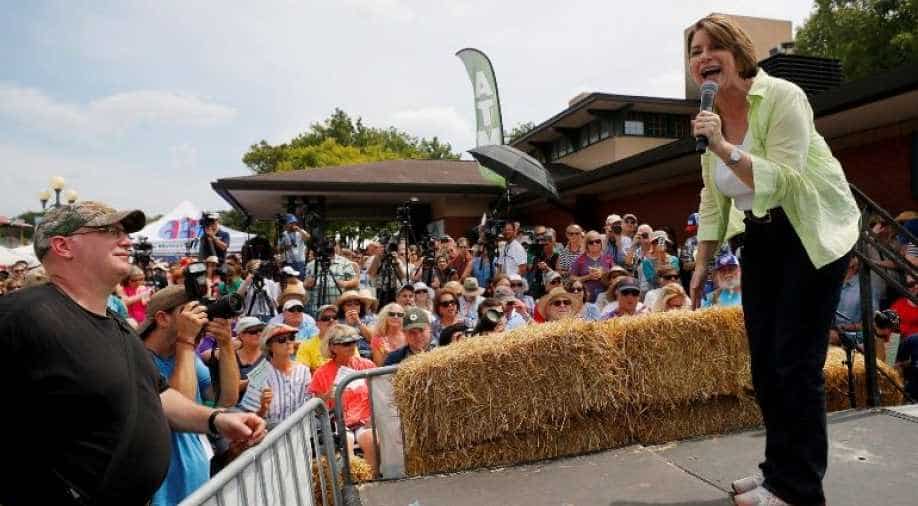 2020 Democratic US presidential candidate and US Senator Amy Klobuchar (D-MN) speaks at the Iowa State Fair in Des Moines, Iowa, US. Photograph:( Reuters )

The sparsely populated US heartland has remained loyal to the Republican president even as farmers from Iowa to Wisconsin to Pennsylvania bear the brunt of his tariff war with China.

His advisers insist Trump's projection of toughness against China will only delight, not alienate, his base.

Democrats seeking to face Trump in the November 2020 election challenge that presumption, pointing to farmers reeling from plunging prices and unsold crops during what is now more than a year-long trade war with China.

From front-runner, Joe Biden to US Senators Elizabeth Warren and Amy Klobuchar, many of the more than 20 Democratic presidential candidates have highlighted the economic damage caused by Trump's trade war and biofuel waivers as the central plank of their pitches to rural America.

At various campaign stops in Iowa since June, Biden has said the trade war was "crushing" American farmers.

“How many farmers across this state, across this nation, have to face the prospect of losing everything, losing their farm because of these tariffs?” Biden said in Warren County, Iowa, last week.

Biden's aides say he will make campaigning in rural areas a top priority.

"Vice President Biden will work to expand the market for ethanol and the next generation of biofuels, and will re-engage allies to negotiate trade that benefits American farmers and other workers," TJ Ducklo, a Biden spokesman, told Reuters.

In recent weeks, several other candidates, including Warren and Mayor Pete Buttigieg of South Bend, Indiana, have rushed to roll out plans for rural America, touching on everything from farm subsidies to rural healthcare and broadband.

They have already been campaigning heavily in rural Iowa, the state that kicks off the party’s nominating contest in February and is the largest producer of corn and ethanol.

In the past, Democratic candidates often just paid lip service to rural voters, said former US Senator Heidi Heitkamp of North Dakota, who founded the One Country Project to help democrats broaden their rural appeal after she lost her re-election bid last year.

This year is different, she said in an interview.

“There’s an appreciation that we can’t continue to fail at the rate we’re failing in rural America and be successful in presidential races and Senate races," Heitkamp said.

She added: “We’re getting helped a lot by the president in this regard."

Roger Johnson, president of the National Farmers Union, said in a statement last Friday: "Between burning bridges with all of our biggest trading partners and undermining our domestic biofuels industry, President Trump is making things worse, not better."

But they supported Trump over Democrat Hillary Clinton in 2016 by more than 30 percentage points.

Next year is again expected to be an uphill battle for Democrats.

Officials worry the party's increasingly liberal direction on immigration and other Trump-driven hot-button issues are socially and culturally at odds with rural voters.

According to the latest Reuters/Ipsos poll conducted this month, five in 10 US adults in rural areas approved of Trump's performance in office, higher than his 41 per cent approval nationwide.

“Farmers are patriots ... and they know the long-term benefits are going to be worth it for themselves and this nation," Murtaugh said.

The White House also unveiled a $16 billion aid package in July to help farmers hurt by the trade war and bad weather.

But Democrats point to last year's congressional elections, where the party increased its share of the vote from 2016 in at least 54 districts with large rural populations, as a sign that Trump's grip on rural America may be loosening.

Even a small erosion in Trump’s support among rural voters could make a difference in battleground states like Pennsylvania, Wisconsin, and Michigan, where Trump won by razor-thin margins in 2016, Democratic strategists say.

Trump won by a combined total of just 77,000 votes in the three states.

Priorities USA, the largest Democratic Super PAC, is spending hundreds of thousands of dollars a week to run digital ads in those states as well as in Florida, aimed at tying Trump’spolicies to economic difficulties that many working-class people face.

A round of more bad news for farmers last week, including extra tariffs Beijing announced on soybeans and other key US agricultural exports gave Democrats a fresh opening to attack Trump.

After Reuters reported this month that Trump gave regulators the green light to grant exemptions to more than 30 small refineries so they can use less ethanol, Democratic candidates pounced on it as evidence Trump favours the oil industry.

Klobuchar, the Minnesota lawmaker who has centred her campaign narrative on her ability to win over rural Midwestern voters, said that if elected, she would block pending refinery waiver applications and look to reverse any approved.

“He folded to Big Oil,” she told reporters on Thursday.

Murtaugh, the Trump campaign spokesman, rejected the accusation, saying the president was concerned about some “small” refineries not being able to cope with costly standards.

“As president, he must look out for the economic interests of everyone involved,” he said.

The backlash from agricultural and biofuel trade groups has been particularly strong in Iowa, a swing state won twice by Obama but that Trump carried in 2016.

“Democrats have crisscrossed Iowa. They are speaking to ethanol producers who have idled plants and talking to workers who are losing their jobs," said Patty Judge, a former Democratic lieutenant governor in Iowa and current chair of the Focus on Rural America, which advocates progressive economic policies in rural areas.

"This is an opportunity for Democrats to win back the heartland and the White House."