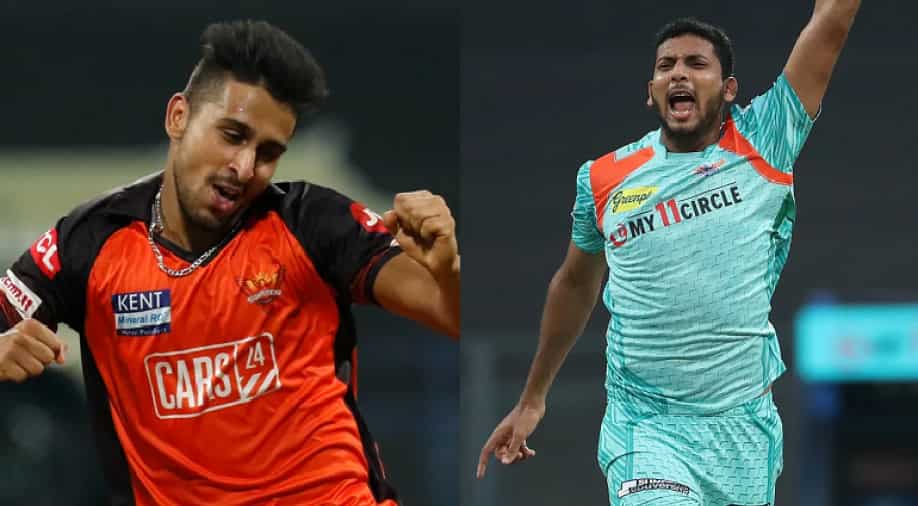 A number of young rising stars from the IPL, including the likes of Umran Malik and Mohsin Khan are in the fray for selection in India's squad for the T20I series against South Africa at home.

Emerging stars like Umran Malik and Mohsin Khan could be rewarded for their IPL performances while old-horses Shikhar Dhawan and Dinesh Karthik are likely to return to the T20 set-up when the India squad is picked for the home series against South Africa on Sunday.

All-rounder Hardik Pandya, who has not played for India since the T20 World Cup last year, has shown form and fitness in the IPL and is set to be included in the squad for the five-game series beginning June 9. He is finally back to bowling regularly, which was critical in his national comeback bid.

After a two-month-long IPL and with the Test team due to depart for England on June 15, some of the all-format players including Rohit Sharma, Virat Kohli, Rishabh Pant and Jasprit Bumrah could be rested for the home series.
A similar squad is also expected to be picked for the two T20s in Ireland later in June.

If that is the case, the captaincy responsibility could go to either Dhawan, who led in Sri Lanka last year, or Hardik who has impressed as a leader in his debut season for Gujarat Titans. The IPL continues to unearth future stars and this season has been no different.

While Umran impressed with his raw pace for the Sunrisers, left-arm pacer Mohsin, has stood out both for his speed and accuracy. As his Lucknow Super Giants skipper K L Rahul said left-arm pacers are always in demand at the highest level, Mohsin could get his big break on Sunday.

Another left-arm pacer in the reckoning is Arshdeep Singh, who once again had a good season for Punjab. He had one of the best economy rates in the death overs and displayed the ability of landing yorkers at will, which is always welcome in an unforgiving format like the T20.

In the batting department, Tilak Verma showed a lot of promise in his maiden IPL season and might get a look in for the South Africa series, considering his Mumbai Indians skipper Rohit Sharma, who is also the India captain, had reserved high praise for the left-hander.

The likes of Deepak Hooda and Venkatesh Iyer were tried in the middle-order over the West Indies and Sri Lanka series and it remains to be seen, if either of them retains his place or if selectors give preference to IPL form.

Dinesh Karthik, who has made a strong case for the finisher's role with his exploits for RCB, is also expected to make his umpteenth comeback in the Indian team.

Rahul Tewatia, who has finished games for Gujarat from improbable situations this season, can also be given an opportunity in that position. The form of Yuzvendra Chahal and Kuldeep Yadav has also attracted a lot of attention, potentially making way for the return of 'Kulcha'.

It is still early days in a T20 World Cup year but the South Africa series should give the team management enough idea to decide its core group of players for the ICC event Down Under in October-November.