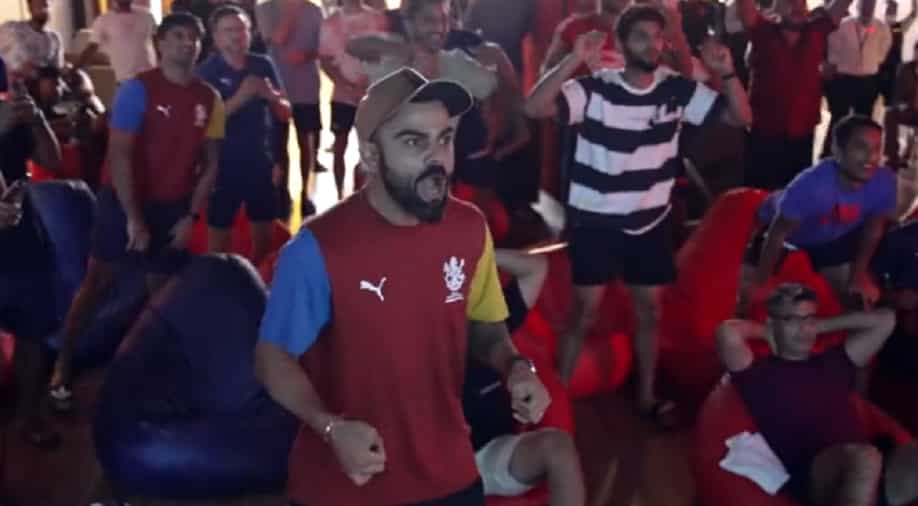 Mumbai Indians (MI) defeated Delhi Capitals (DC) by 5 wickets in their final league game of the season on Saturday (May 22) to end their disappointing season on a high and help Royal Challengers Bangalore (RCB) qualify for the playoffs. DC had their fate in their own hands and a win would have seen them leave RCB behind to qualify for the playoffs.

However, Rishabh Pant & Co. went down fighting against MI as RCB finished at the 4th spot with 16 points from 14 matches. RCB players were seen cheering for Mumbai Indians throughout the crucial encounter on Saturday. The likes of captain Faf du Plessis, Virat Kohli and the other members of the squad were all glued to the TV screens as MI locked horns with DC at the Wankhede Stadium in Mumbai.

After Mumbai Indians' victory against Delhi Capitals, RCB players and staff members went berserk in their team hotel and were seen celebrating wildly in a video shared by the franchise on social media. "Thank you Mumbai," Kohli can be heard saying in the video as he expressed his gratitude for the Rohit Sharma-led side.

RCB qualified for the playoffs for the third consecutive year. We bring to you raw emotions, absolute joy and post-match celebrations, as the team watched #MIvDC. This is how much it meant to the boys last night.@kreditbee#PlayBold #IPL2022 #Mission2022 #RCB #ನಮ್ಮRCB pic.twitter.com/5lCbEky8Xy

Earlier, ahead of the start of the game between MI and DC, RCB had changed their display picture on social media and used their logo in a blue background to express their support for Mumbai Indians. RCB were in desperate need of a favour from MI as DC's win would have sent them packing from the tournament.

Asked to bat first in the game, DC rode on Rovman Powell's 43 and captain Rishabh Pant's 39 off 33 balls t post a fighting total of 159 runs on the board. DC bowlers got their team off to a good start with the ball during MI's run chase but Tim David's sensational cameo of 11-ball 34 saw Mumbai get over the line with 5 balls to spare.

With the help of MI, RCB have now qualified for the playoffs for the third season in a row in the IPL and will be hoping to go the distance under skipper Du Plessis this season.