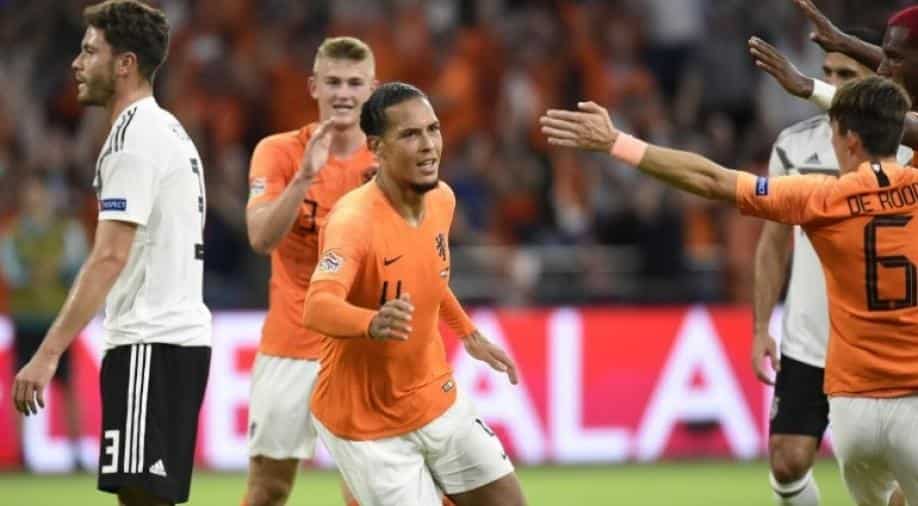 Joachim Loew is facing the biggest crisis of his 12-year tenure as Germany's head coach after their embarrassing 3-0 defeat away to the Netherlands.

These are dark days for the Germans in the wake of their dismal World Cup display when they crashed out after finishing bottom of their group.

They are now bottom of Nations League Group One and Loew must avoid defeat against world champions France in Paris on Tuesday, knowing his future will be debated at home.

"Yes, I understand that there is a debate and we have to deal with it," Loew told broadcaster ZDF.

"In the next two days, I will focus entirely on preparing the team before the match in Paris against France, and not on the debates in public, although these debates are normal, very normal."

"We have to show character against France and win the return match against the Dutch or we are going down.

"We had good chances, but couldn't put them away, which would have been good for confidence. It's bad that we fell apart at the end," he added.

After ex-Germany captain Michael Ballack said he was "surprised" Loew kept his job after their woeful World Cup display, the Dutch defeat ramps up the pressure.

Once again, Loew trusted his senior players to deliver a win, but his Bayern Munich axis of Manuel Neuer, Jerome Boateng, Mats Hummels and Thomas Mueller failed to deliver.

Both Muller and his second-half replacement, Manchester City starlet Leroy Sane, squandered clear chances either side of he break.

Hummels admitted the team can expect a backlash from the German public after the defeat.

"We'll get it in the neck now, but we have no one to blame but ourselves," said Hummels.

Germany have now conceded goals in their last 19 internationals.

"We made too little of our chances, although we could have gone ahead early on," said goalkeeper and captain Manuel Neuer. "At the end, we were too open and made mistakes."

Neuer put the blame firmly on the players: "Before the game, every player signalled to the coach that they were ready to play."

"The structure was missing after the first 30 minutes, but it's hard heading home without having scored," said Kroos.

"You need a reward for the good work you do and that's not happened. "We have to keep going, we have the next chance on Tuesday and concentrate on the good things we did."

The Dutch were delighted with their first win over the Germans for 16 years.

"Sometimes you need a bit of luck, but we deserved the win, fought for every inch and defended well," said Dutch coach Ronaldo Koeman. "It's an unbelievable result, especially as the Germans weren't that bad.

"It's 16 years since we beat Germany and we are on the right way with a talented, young team."