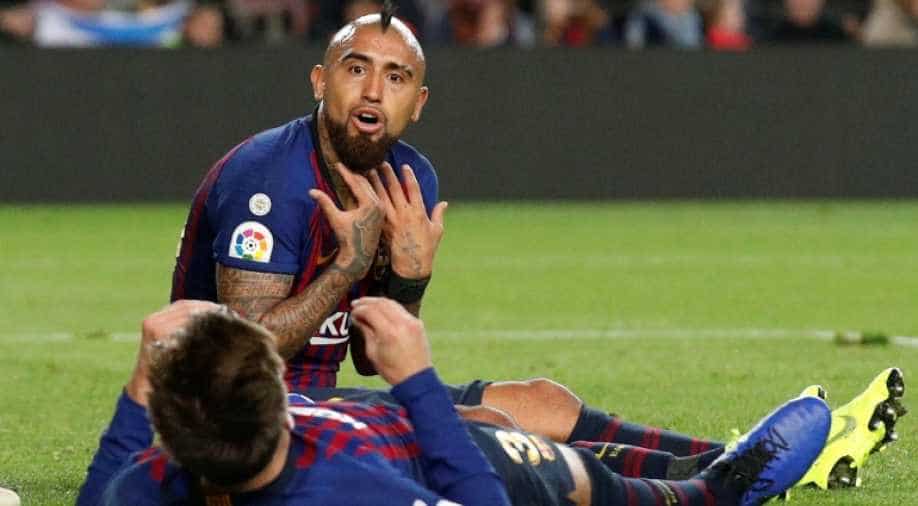 Barca trailed 2-0 at halftime and even though Lionel Messi struck twice, Betis became the first side to beat the champions at Nou Camp since Alaves in Sep 2016.

Barcelona defender Gerard Pique admitted his side have a problem with their porous defence after the La Liga leaders were beaten 4-3 at home by Real Betis on Sunday, conceding four times at the Nou Camp for the first time in over 15 years.

Yet the Spanish international, while conceding that all their defenders all needed to improve, was also adamant that the champions' fans should not be worried about the current frailties of the team's rearguard.

Barca trailed 2-0 at halftime and even though Lionel Messi struck twice on his return from injury and Arturo Vidal also scored for the Catalans, Betis became the first side to beat Barca at the Nou Camp since Alaves in September 2016.

"We know we have a problem and that we are conceding a lot of goals, more than we have conceded for a very long time," Pique told reporters.

"We will almost never be the team that concedes the fewest goals because of our attacking philosophy, but we know we have to improve."

Despite Sunday's defeat, Barca still lead the standings and are one point clear of Atletico Madrid, Alaves and Sevilla, although they have by far the worst defensive record of the top seven teams in the league.

"It's not an individual thing, it's a group problem. We have to focus on it and work together," Pique said.

"It's basic stuff which we know and we have talked about. Today, we faced a very attacking team and we had to take risks.

"I think that, defensively, we all need to improve. Sometimes, we go to press and we don't all go and that leaves a lot of gaps between the lines and teams create a lot of counter-attacks against us.

"Today, for example, we should have stopped their first goal by committing a foul."

Barca have dropped points in five of their 12 games this season, four times against sides in the bottom half of the standings but Pique said fans should not be concerned by the team's form.

"It's true that we are finding it harder to beat teams who, in theory, are smaller than us but I think it's something sporadic and won't happen throughout the season," he said.

"Our fans can relax, we are top of the league. This year, the level of our opponents has risen, you can no longer win the league with 100 points.

"Teams have bigger budgets, better players and they are more competitive and that's better for spectators."