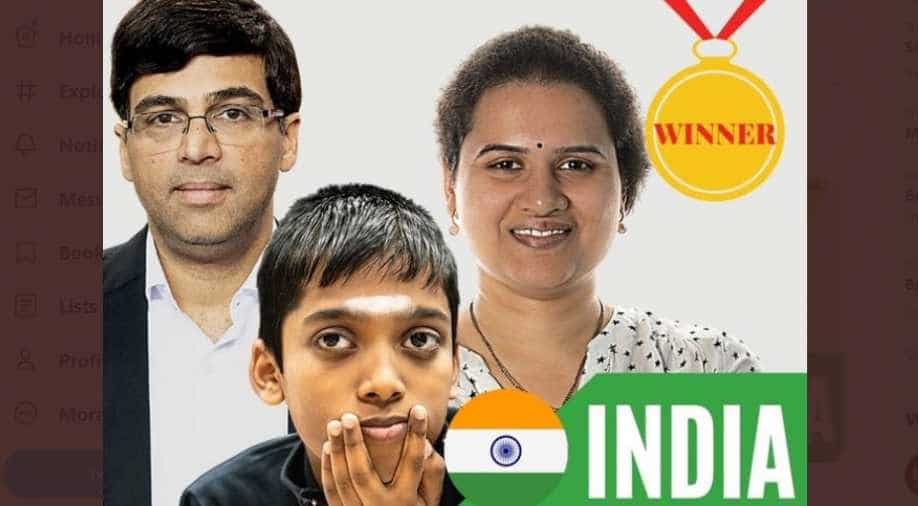 This weekend was a treat for the chess enthusiasts as the team that won India its maiden Chess Olympiad gold celebrated its victory with a special Twitter Chat using the service’s new conversation settings.

This weekend was a treat for the chess enthusiasts as the team that won India its maiden Chess Olympiad gold celebrated its victory with a special Twitter Chat using the service’s new conversation settings.

This exclusive Twitter Chat was hosted by the vice-captain Srinath Narayanan and the comic Samay Raina. They engaged in light-hearted conversations with Grandmaster Viswanathan Anand, captain Vidit Gujrathi along with the other members of the Indian team including Koneru Humpy, Dronavalli Harika, Vantika Agrawal , Nihal Sarin, Divya Deshmukh, Praggnanandhaa and Bhakti Kulkarni. The winning team talked about its Chess Olympiad experience and also shared some tips for budding chess players, on how to prepare for a tournament as big as the Olympiad. The chat also saw the participation of another eminent Indian player, Adhiban Baskaran, and streamer Sagar Shah.

Thanks to @TwitterIndia we are doing a session of Q and A with the Indian team.#ChessTweetChat https://t.co/WswL4vkvWv

The Indian team created history on August 30 by winning its first-ever gold in the 2020 Online Chess Olympiad. This was the first time FIDE, the international chess federation, was holding the Olympiad in an online format due to the Covid-19 pandemic.

The chat started off with some smooth ‘opening moves’ by Srinath and Samay and quickly progressed to an engaging session of banter between the participants. The chat also saw members of the team sharing their thoughts about some significant developments in the game.

During the chat, Vishwanathan Anand was asked about his views on FIDE President Arkady Dvorkovich’s suggestion of staging a Champions Series between India and Russia. In his reply, the Indian chess legend said that he liked the idea and it is on the lines of similar series of matches Russia has played against many other teams, including China.

Its a good idea, like the matches that Russia has played with China for many years or other team matches that are organised

The Grandmaster was also asked about his opinion on one of the most interesting new trends in the tabletop game, that of streaming, by Samay, who is an accomplished chess streamer himself. Vishwanathan Anand answered by saying that he was supportive of the development, which would help attract a newer demographic to the game.

it is an interesting development, definitely introduces new people to the game of chess, which is a good thing

The players sharing their experiences, their favorite moments as well as their journey throughout the tournament in general, were some of the other key highlights of this memorable chat:

I would like to thank each and every member of the team , the captains, the streamers and our viewers for making my first Chess Olympiad a memorable one.

it was nice to get a team gold, and I enjoyed being part of the team journey