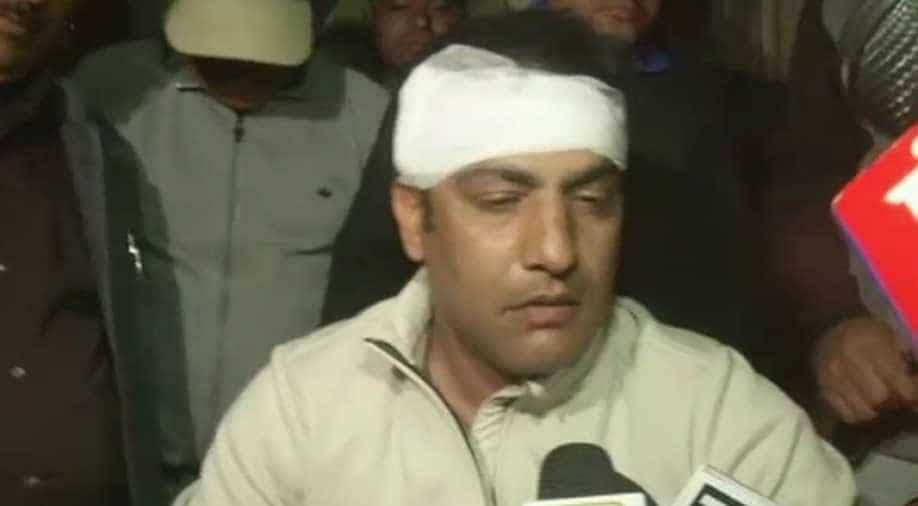 Anuj Dheda, who was not selected in the state team, attacked Bhandari, who sustained head and ear injuries

Former India pacer Amit Bhandari, who is chairman of the DDCA senior selection committee, was on Monday assaulted by a group of unidentified men, led by a disgruntled Under-23 player, during the Delhi senior team's practice game at the St Stephen's ground.

Anuj Dedha, who was not selected in the state team, attacked Bhandari, who sustained head and ear injuries and was taken to Sant Paramanand Hospital at Civil Lines by his colleague Sukhvinder Singh.

The goons along with the player in question fled before the cops could reach the spot but was later arrested.

"At around 1.15 pm today at St Stephen ground where trials were going on, one person Anuj Dedha, who was not selected, came and asked about his rejection and slapped Bhandari. Some 10-15 more boys came and hit him," Nupur Prasad, Deputy Commissioner of Police (north) said.

"Based on the complaint, a case has been registered and the accused and his brother Naresh were arrested," the DCP said.

Dedha's name featured in the initial 79-member list, released by the DDCA in November for the U-23 trials. As per the probables list accessed by PTI, his date of birth is November 22, 1995.

"I have personally spoken to the Delhi Police Commissioner Amulya Patnaik. The guilty will not go unpunished. We will register an FIR," Sharma said.

Sharma, who went to meet Bhandari at the hospital said, "He is very shaken and it is natural. The doctors have advised that he should be kept under observation for 24 hours as a precautionary measure."

"The goons were pressurising him to select a player, who had failed to get into the U-23 team on merit. Bhandari claimed that the one man also threatened him with a revolver. This is shameful that an honest selector was being prevented from performing his duties. I have been told that one person has been detained for questioning," Sharma, who is also a well-known journalist, informed.

The attack on Delhi selector Amit Bhandari for not picking a player is a new low and I am hopeful that stringent action will be taken against the culprit and adequate measures will be taken to avoid such incidents.

"The attack on Delhi selector Amit Bhandari for not picking a player is a new low and I am hopeful that stringent action will be taken against the culprit and adequate measures will be taken to avoid such incidents,' Sehwag tweeted.

Former India opener and Delhi legend Gautam Gambhir said a life ban should be handed to the guilty.

"Disgusted to see this happen right in heart of the capital. This can't slip under the carpet and I will personally ensure it does not," he tweeted.

"To begin with I am calling for a life ban for the player who orchestrated this attack post his non-selection."

Disgusted to see this happen right in the heart of the Capital. This can’t slip under the carpet and I will personally ensure it doesn’t. To begin with I am calling for a life ban from all cricket for the player who orchestrated this attack post his non-selection. https://t.co/RpS6fzTcNl

"I was having my meal along with a colleague inside the tent and Bhandari along with other selectors and senior team coach Mithun Manhas was watching the Syed Mushtaq Ali Trophy probables play a trial game.

"A couple of men first came and went up to Bhandari. There was a heated exchange between Bhandari and the two men. They left and before we could gather our thoughts, suddenly some 15 men armed with hockey sticks, rods and cycle chains came charging," Saini said.

"When the other senior team players attending the trials along with us rushed to save Bhandari, they started threatening us and one of them said, "Don't get into this or else we will shoot you."

"They attacked Bhandari with hockey sticks and rods as he tried to run away and he sustained head injury," the former Delhi seamer added.

According to an eye witness, Dedha and his accomplices chased Bhandari in front of the senior team players as the former India pacer ran for his life.

When asked who could be behind the attack, Saini said, "I was not there when these two guys came and spoke with Bhandari. He is obviously rattled and once he gives his statement to the police, we will get to know more."

Delhi cricket has always been mired in corruption charges and allegations of dubious selections at the various age-group levels have also surfaced time and again.