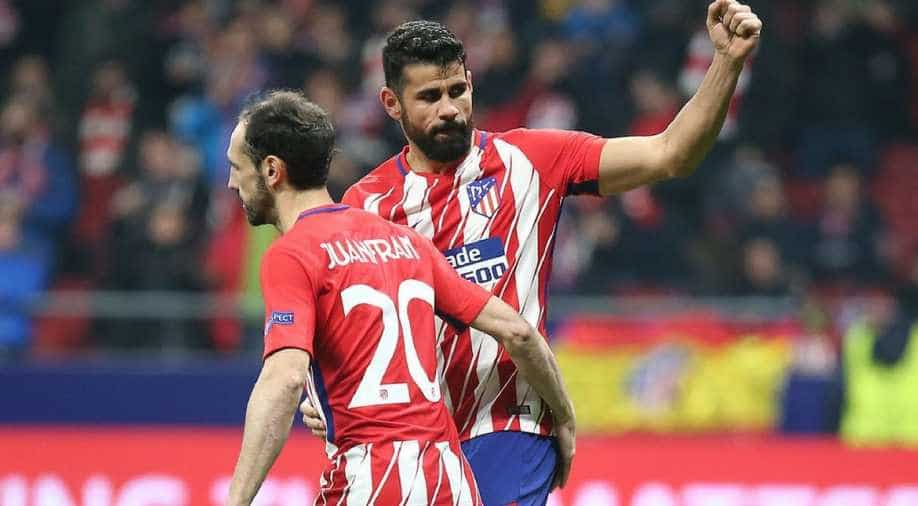 Diego Costa helped Atletico Madrid take a big step toward the Europa League quarter-finals by scoring in a 3-0 victory over Lokomotiv Moscow on Thursday.

Atletico will carry a commanding lead into the second leg in Russia.

Saul Niguez hit the net with a stunning strike at the Wanda Metropolitano before Costa made it two with an instinctive finish.

Koke added a third late on to leave Lokomotiv with a mountain to climb next week.

Costa has six goals in 12 appearances since moving to Atletico from Chelsea in January.

"In the whole game we were superior," Atletico coach Diego Simeone said.

Security around the game was ramped up amid fears of a repeat of the fan violence that marred Athletic Bilbao's match against Spartak Moscow a fortnight ago.

Only around 500 Russian supporters were reported to have made the trip to the Spanish capital, however, and there was no visible sign of trouble before kick-off.

Lokomotiv sit seven points clear at the top of the Russian Premier League but this is as far as the club has gone in Europe since reaching the Champions League last 16 in 2004.

"In no way did I feel embarrassment for the team," Lokomotiv coach Yuri Semin said.

"We do not consider the tie lost."

Atletico, meanwhile, are rated as Europa League favourites with the bookmakers and, on this evidence, they will take some stopping.

Lokomotiv managed only one shot on target in the 90 minutes.

Both teams stood around the centre circle before kick-off as a minute that began in silence broke into applause in memory of Fiorentina defender Davide Astori, who died suddenly on Sunday.

Atletico controlled possession early on but it took a thunderbolt from distance to break the deadlock.

Saul picked the ball up 30 yards out and without a better option unleashed a left-footed shot that sailed into the top corner.

They should have doubled their lead before half-time. Lokomotiv goalkeeper Guilherme rushed out and was robbed of the ball by Antoine Griezmann on the touchline. With the goal gaping, the Frenchman could only guide his long-range effort wide of the far post.

Costa was more precise early in the second half, however, steering home the rebound after Griezmann had seen his close-range finish saved. Saul had provided the brilliant pass.

Griezmann was taken off in the 66th minute and Costa followed eight minutes later.

But there was still time for a third when Koke burst into the box and prodded a shot into the corner.