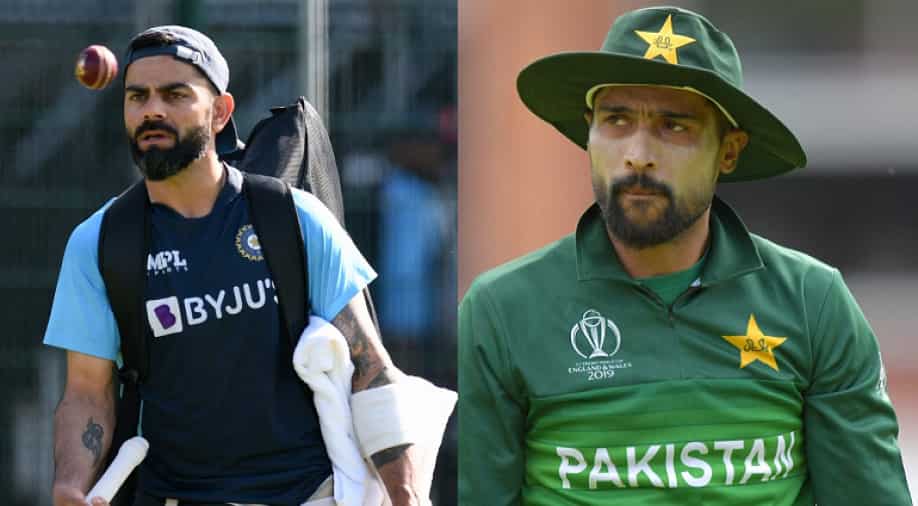 Pakistani cricketers hailed former India Test skipper Virat Kohli after his decision to step down as the captain of the Indian Test team.

Wishes have been pouring in from all corners for Virat Kohli after he announced his decision to relinquish India's Test captaincy on Saturday (January 15). Several current and former cricketers have taken to social media to congratulate the former India captain on a successful stint as the leader of the national team in the longest format of the game.

Nonetheless, Kohli signed off as one of the most decorated Test captains of all time. He remains the first Asian captain to win a Test series on Australian soil and led India to some memorable wins both at home and away from home. Kohli is the most successful Indian captain of all time in Tests with 40 wins in 68 matches as skipper of the side.

While the Indian cricket fraternity sent across their wishes on Kohli's stepping down as the Test team captain of the Indian team, former and current Pakistani cricketers also hailed the former Indian skipper on his departure. A number of Pakistani players including the likes of Mohammad Amir, Nasim Shah and others lauded Kohli.

Also Read: You held on to nothing with greed: Anushka Sharma posts hearfelt note as Kohli gives up Test captaincy

"@imVkohli brother for me u are a true leader of upcoming generation in cricket because u are inspiration for young Cricketers. keep rocking on and of the field," wrote former Pakistan pacer Amir, who has enjoyed some fierce on-field duels with Kohli.

@imVkohli brother for me u are a true leader of upcoming generation in cricket because u are inspiration for young Cricketers. keep rocking on and of the field. pic.twitter.com/0ayJoaCC3k

A remarkable journey, career and perseverance which brought us great cricket and entertainment. A brilliant inspiring player of the sport takes a bow. Well done @imVkohli in all your efforts and leading a team with such poise and dignity. Go well ! https://t.co/fLBhjtbNor

You are the inspiration for many! https://t.co/0xa9mVAoHv

That flare of passion with which you led your side was visible in your captaincy. It’s been 7 years of fearless leadership, quality spirit of cricket and a great ambassadorship of the game. Best wishes for the future bro @imVkohli, keep rocking https://t.co/G2BcSTzIRM

Kohli was appointed as India's full-time Test captain in the year 2014 after MS Dhoni's retirement from the longest format. In his seven-year stint as the captain of the team, Kohli took India to greater heights in Test cricket and made them a dominating force across all conditions.

Kohli led India to their maiden Test series win in Australia while also inspiring them to series victories in West Indies and Sri Lanka. Kohli closely missed out on ending his captaincy stint with a series win in South Africa as India slipped to a 2-1 defeat after winning the series-opener comfortably.