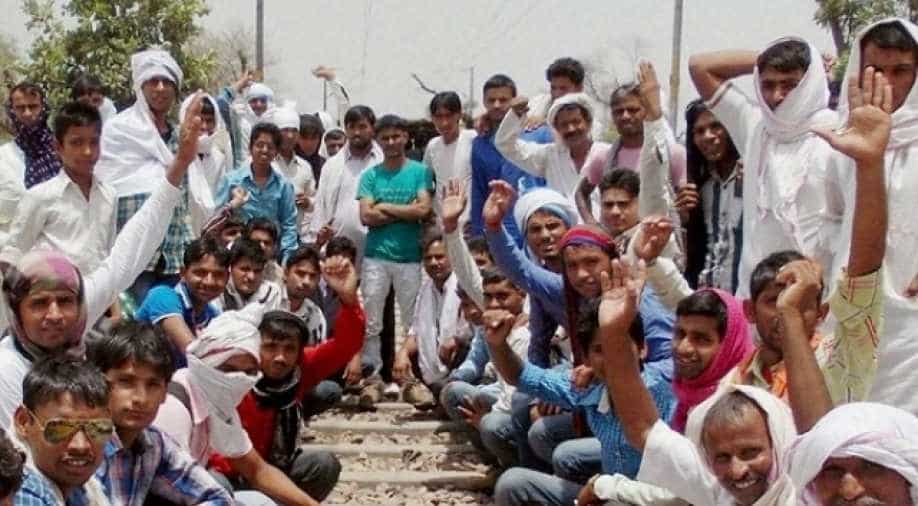 The Rajasthan High Court had earlier struck down the Special Backward Class Reservation Act, 2015 under which the Gujjars were given reservation. Photograph:( DNA )

The government declared in a notice that the Banjara/Baldia/Labana, Gadia-Lohar/Gadalia, Gujjar/Gurjar, Raika/Rebari and Gadaria (Gaadri) castes have been re-included in the OBC list||Their reservation as OBCs has run into legal issues twice on grounds of exceeding the 50% cap set by the top court

The Rajasthan government on Saturday reincluded five castes including Gujjars into the list of Other Backward Castes (OBCs).

Arun Chaturvedi, minister for social justice, empowerment, and minority affairs, said the five castes would remain under the OBC category till the the Special Backward Class (SBC) law was not passed.

The minister assured that the main motive of the Rajasthan government was to protect the jobs of five castes in the state.

"Till the Special Backward Class (SBC) law is not passed the five castes will benefit from the Other Backward Caste (OBC) category," Arun Chaturvedi told ANI.

He said that the government has already filed the SBC bill and that they are trying to pass the bill as soon as possible.

The communities were initially included in the OBC list in 1994. A SBC law granted five per cent quota in government jobs and educational institutions under the SBC category to four communities.

The reservation later ran into legal issues and the Rajasthan High Court put a stay on the reservation in 2009 on the grounds that it exceeded the legal ceiling of 50 per cent, set by the top court, the Supreme Court of India.

In September 2015, the Rajasthan State Assembly passed another Rajasthan Special Backward Classes Bill giving five per cent reservation to the five castes and taking the overall reservation in the state to 54 per cent.

The high court scrapped the Act last year, saying there were no extraordinary circumstances to allow the state's overall reservation in government jobs and education institutes to go beyond the 50 per cent cap set by the top court.

(WION with inputs from ANI )