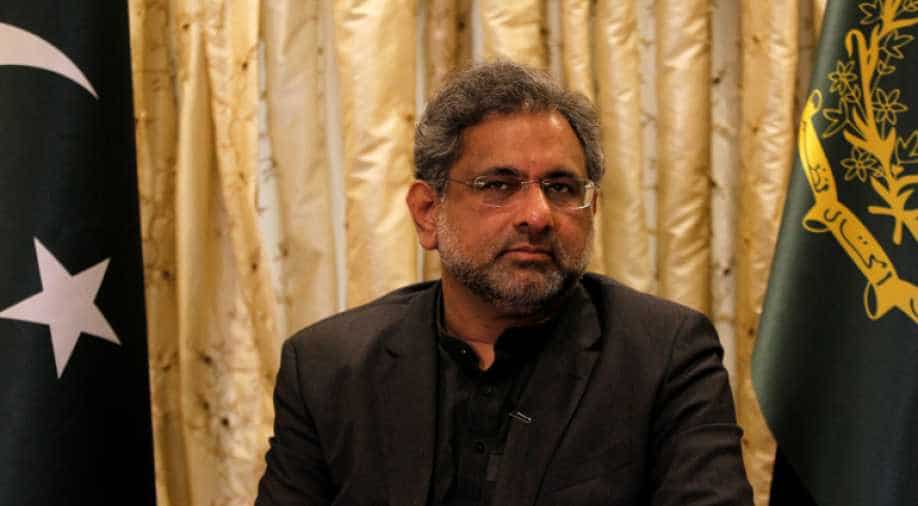 Under pressure from the United States and international institutions to crack down on terrorist financing, Pakistan last month drew up secret plans for a 'takeover' of charities linked to Islamist leader Hafiz Saeed, who Washington blames for the 2008 attacks in Mumbai that killed 166 people

Pakistani Prime Minister Shahid Khaqan Abbasi on Monday said his government will push ahead with plans to seize control of charities run by an Islamist designated a terrorist by Washington, and warned the United States not to weaken Pakistan.

Abbasi brushed off US President Donald Trump's recent tweet accusing Pakistan of "lies and deception" in its commitment to fighting terrorism, as he raised the prospect of charging the United States to use Pakistan's airspace to resupply NATO troops in Afghanistan.

Under pressure from the United States and international institutions to crack down on terrorist financing, Pakistan last month drew up secret plans for a "takeover" of charities linked to Islamist leader Hafiz Saeed, who Washington blames for the 2008 attacks in Mumbai that killed 166 people.

The United States has labelled the charities Jamaat-ud-Dawa (JuD) and the Falah-e-Insaniat Foundation (FIF) as "terrorist fronts" for Lashkar-e-Taiba (LET), or "Army of the Pure", a group Saeed founded in 1987 and which Washington and India accuse of carrying out the Mumbai attacks.

Saeed has repeatedly denied involvement in the Mumbai attacks and says the charitable organisations he founded and controls have no ties with militants.

But both he and the organisations have been sanctioned by the United Nations and his freedom in Pakistan, where he holds public rallies, has been a thorn in Islamabad's relations with India and the United States.

"Yes, the government will take over the charities which are sanctioned and not allowed to operate," Abbasi, 59, told Reuters in an interview at the prime minister's chamber in Pakistan's Parliament in capital Islamabad.

Answering specific questions about the proposed takeover of JuD and FIF, Abbasi said the civilian government had the backing of the powerful military, which effectively controls Pakistan's security and foreign policy.

He declined to set a deadline.

JuD and FIF did not respond to Reuters requests for comment. The organisations have previously said they would take legal action if the government tried to take them over. Saeed could not be reached for comment.

There are concerns in Pakistan that the country may face financial sanctions over accusations of selective action against Islamist militant groups and financing.

Pakistan is a base for myriad Islamist movements, and critics accuse Islamabad of only targeting militants who attack the state while leaving unscathed those who target neighbouring Afghanistan and arch-foe India. Pakistan denies those allegations.

Abbasi said Pakistan had made progress in curbing terrorist financing after meetings with the Financial Action Task Force (FATF), an international body that warned Islamabad could be put on a watchlist for not doing enough to stop the practice.

"We've had several meetings on that, and from what I've seen a large part of those actions have been taken," Abbasi said.

A UN Security Council team is due to visit Pakistan this month to review progress against UN-designated "terrorist" groups, which includes LeT and others such as the Afghan Taliban-allied Haqqani network.

Former petroleum minister Abbasi said any sanctions against Pakistan would be counter-productive to the country's own battle against Islamist militants, which he called "the largest war on terror in the world".

"Any constraints put on Pakistan, actually only serve to degrade our capability to fight the war against terror," he said.

Relations between the United States and its uneasy ally have frayed since January 1, when Trump lashed out against what he called Pakistan's "lies and deceit" over its alleged support of Afghan Taliban militants battling US troops in Afghanistan. Washington has since suspended aid totalling about $2 billion.

Abbasi said Trump's tweet was "unacceptable" in its tone and that Pakistan should not be "scapegoated" for US failures in Afghanistan.

"That is something we cannot accept because nobody's suffered more than Pakistan," Abbasi said, adding that tens of thousands of Pakistani have died from militancy that has inflicted damage worth $120 billion to the economy.

US officials last year warned of tougher measures against Pakistan, including potentially withdrawing its "non-Nato ally" status or even designating it a state sponsor of terrorism.

Abbasi said much of the suspended aid was from the Coalition Support Fund (CSF), a US Defence Department programme to reimburse allies for the costs of supporting counter-terrorist and counter-insurgency operations.

He said the US needed to respect Pakistan's contribution to the fight against Islamist militancy and raised the prospect of charging Washington for air transport flights that have been resupplying US-led troops and Afghan forces in landlocked Afghanistan.

"If somebody wants to start quantifying expenses and aid, I think let's put this on the table also. Let's discuss that," Abbasi said, though he added that such talk was "hypothetical".

Abbasi dismissed media reports that Islamabad has ended intelligence sharing with the US military as false.

And he also spoke fondly about a brief discussion he had with Trump in September at a reception at the U.N General Assembly in New York.

"I found him to be fairly warm," he said. "Somebody that you would like to engage with and talk to."