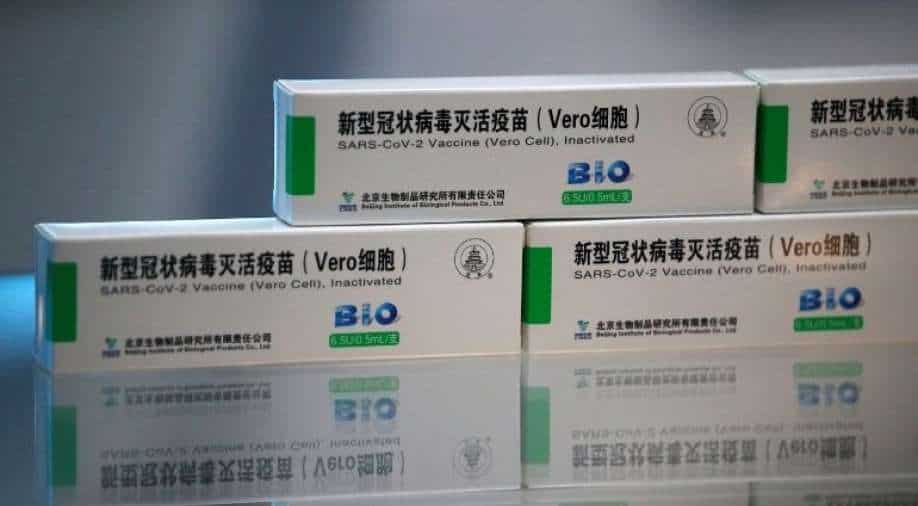 Packages of COVID-19 vaccines by Beijing Institute of Biological Products of Sinopharm's China National Biotec Group (CNBG), are displayed during a government-organised visit to the vaccine’s production line in Beijing, China Photograph:( Reuters )

Earlier, Pakistan has said that it is not planning to buy vaccines anytime soon as it aims to tackle the COVID-19 challenge through herd immunity and donated vaccines from friendly countries like China

Pakistan is planning to buy 7 million doses of the coronavirus vaccines from China as the nation is experiencing a sharp rise in COVID-19 infections, a top minister has said, its first purchase from any country.

Earlier, Pakistan has said that it is not planning to buy vaccines anytime soon as it aims to tackle the COVID-19 challenge through herd immunity and donated vaccines from friendly countries like China.

Herd immunity occurs when a large number of people, usually 70 to 90 per cent, become immune to a contagious disease after being infected to it.

Planning Minister Asad Umar, who also heads the National Command and Operation Centre (NCOC), on Thursday said that the first consignment would arrive in Pakistan before the end of this month.

''We are in the process to procure Sinopharm and CanSino from China. Two batches of the vaccines, including 1 million doses of Sinopharm vaccine, will reach Pakistan by the end of this month,'' Umar said.

He said the government was planning to bring more people into the vaccination drive by including those over the age of 50 years from next month. Earlier, only health workers and those above 60 years of age were being vaccinated.

Pakistan launched its vaccination drive on February 2 with the frontline health workers which was expanded on March 10 when people of 60 were included. But the country has faced problems in getting enough vaccines to include everyone.

The country aims to vaccinate 70 million people this year.

Pakistan is also endeavouring to procure vaccines from other sources, including the COVID-19 Vaccines Global Access (COVAX) ? a global initiative for equitable access to the vaccines led by Unicef, Gavi, the Vaccine Alliance, the World Health Organisation (WHO) and others.

Last year, Gavi had announced to provide 17 million doses to Pakistan in March. However, as the pandemic escalated worldwide, Europe's own production could not meet the requirement of its own population and the doses could not reach Pakistan.

Initially, China donated 500,000 doses of Sinopharm on February 1. In March, Pakistan received the second shipment of half a million doses of vaccines donated by China.

Meanwhile, the virus is spreading rapidly and Pakistan has recorded 10.3 per cent positivity, the second time when positivity crossed double digits this week, according to the Ministry of National Health Services.

For the first time in eight months, Pakistan reported over 4,000 coronavirus cases on Friday as the third wave of COVID-19 intensified.

The country has recorded 645,356 coronavirus cases. The death toll climbed to 14,091 after 63 more people died in the last one day. On the positive side, the recovery rate is good and so fat 591,145 people recovered.