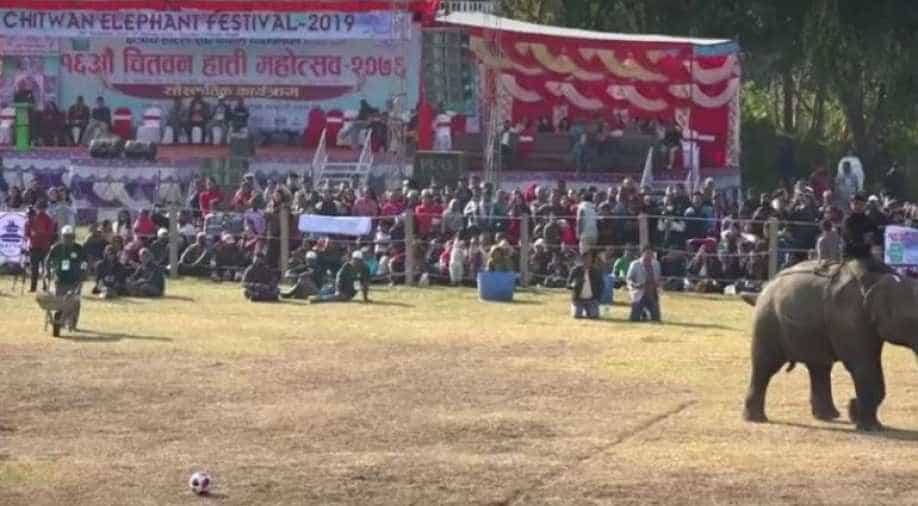 Many outsiders were also looking for signs of abuse at the festival, which has been held in the Chitwan district, home to Nepal's most important conservation area and a lucrative tourist destination, since 2004.

Hundreds cheered as the three beauty contest finalists strolled out into the middle of the grounds and raised their painted trunks to the judges -- symbols of all that is admired and denounced at Nepal's annual elephant festival.

With her toenails painted red and a lotus on her trunk, 35-year-old Buffkali took the trophy at the end of the nine-day festival that ended Friday.

But while elephants were judged on how well they were decorated and groomed, officials were also meant to check their heads and ears for signs of beatings.

Many outsiders were also looking for signs of abuse at the festival, which has been held in the Chitwan district, home to Nepal's most important conservation area and a lucrative tourist destination, since 2004.

Elephants are worshipped as the Hindu god Ganesh in Nepal and big crowds attended the festival -- where over 25 of the creatures took part in football, polo and races, as well as the beauty pageant and a picnic where they were served bananas and sugarcane.

Deepak Bhattarai, chairman of the local hotel association that organises the festival, told AFP the event aims to highlight elephants' "relationship with humans" and to become more "elephant friendly" every year.

"It is exciting. I brought my son here to watch the elephants, you don’t get to see them like this every day," said one visitor Sheetal Karki.

But the festival has also come under fire for abuse, with mahouts using sticks or bullhooks to force the elephants to play.

Surajan Shrestha of the local Animal Rights Club said activists have been working with organisers to ease concerns and had eliminated the use of bullhooks during games this year.

"But we can still see abuse off the field … I hope our campaign will pressure the organisers to take steps to improve (the festival)," he said.

"It’s 2020 – the Chitwan authorities need to stop treating elephants like it’s 1820," said Jason Baker, a vice president of PETA in a statement on Thursday.

"They should focus tourism on the amazing local culture and leave animals alone," he added.

"It’s impossible to ride elephants and force them to play these meaningless 'games' without abuse."

Another popular event in Nepal, elephant polo championships, were halted in 2016 with organisers feeling pressure over the treatment of the animals.