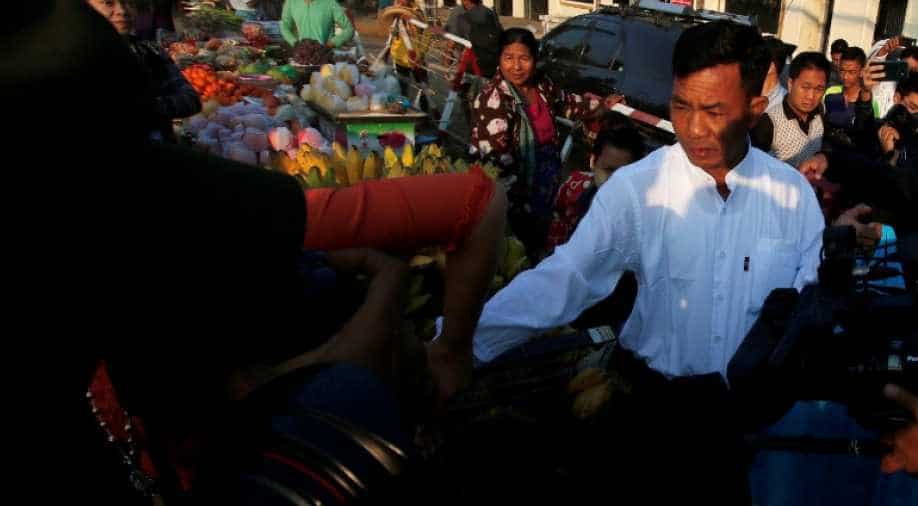 In widely covered testimony at the trial of journalists Wa Lone, 32, and Kyaw Soe Oo, 28, Police Captain Moe Yan Naing gave details of the hours leading up to the arrest and said police had arranged a 'set up'.

A Myanmar policeman who told a court last year how officers planted secret documents on two Reuters reporters in order to "entrap" them was released from prison on Friday, after being sentenced to a year in jail for violating police discipline.

In widely covered testimony at the trial of journalists Wa Lone, 32, and Kyaw Soe Oo, 28, Police Captain Moe Yan Naing gave details of the hours leading up to the Dec. 12, 2017 arrest of the Reuters reporters and said police had arranged a "set up".

Shortly after that court appearance in April, Moe Yan Naing was sentenced to prison for violating the Police Disciplinary Act by having previously spoken to Wa Lone. His family was also evicted from their police housing in the capital Naypyitaw.

Moe Yan Naing criticized the law under which he was punished.

"This police disciplinary law is one of the laws we must amend while we are marching on the path towards democracy," he told reporters outside Insein prison, on the outskirts of the commercial capital Yangon, after his release.

"This law can cause police much suffering because it is outdated," he said.

Police spokesman Colonel Myo Thu Soe told Reuters at the time of the sentencing Moe Yan Naing had been punished "according to the police disciplinary act" and that his "case has been processed by a police court", without elaborating.

Police also said at the time the eviction order was not related to Moe Yan Naing's testimony at the trial of the Reuters journalists.

Asked how he felt about the people who ordered his arrest, Moe Yan Naing said he would console himself through religion.

"I am a Buddhist, I can find peace with that through our Buddhist way," he said, and that he felt "sorry" for the two reporters still behind bars.

A police spokesman could not be reached for comment.

Moe Yan Naing was released after serving around nine months of his one-year sentence. It is customary for prisoners in Myanmar to have their jail time reduced for good behaviour.

In September, the Yangon court found Wa Lone and Kyaw Soe Oo guilty of breaking the colonial-era Official Secrets Act and sentenced them to seven years in jail.

The reporters had been working at the time of their arrest on a Reuters investigation into the killing of 10 Rohingya Muslim men and boys in a village in western Myanmar's Rakhine state. The killings happened during an army crackdown that sent some 730,000 Rohingya fleeing to Bangladesh.

Moe Yan Naing testified in court that a senior officer had ordered a subordinate to meet Wa Lone at a restaurant in Yangon and plant "secret documents" on him.

An appellate court rejected appeals by Wa Lone and Kyaw Soe Oo last month, saying the defence had not provided sufficient evidence to show they were innocent.