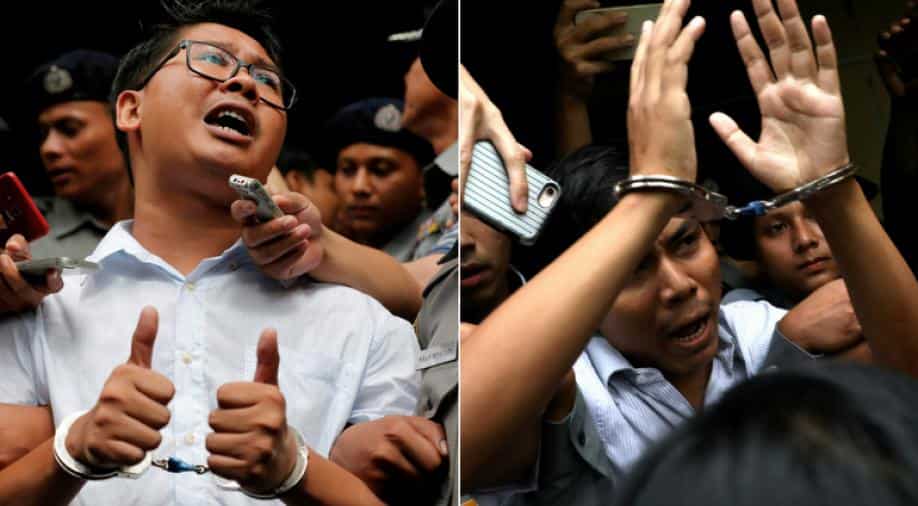 Reporters Wa Lone, 32, and Kyaw Soe Oo, 28, both Myanmar nationals, were arrested in Yangon in December 2017 and later jailed for violating the Official Secrets Act.

Lawyers for two Reuters journalists jailed for seven years in Myanmar on charges linked to their reporting of the Rohingya crisis lodged an appeal Friday with the Supreme Court -- a last chance of a reprieve through the legal system.

Reporters Wa Lone, 32, and Kyaw Soe Oo, 28, both Myanmar nationals, were arrested in Yangon in December 2017 and later jailed for violating the Official Secrets Act.

Reuters says the charge was trumped up to muzzle their reporting into a massacre of Rohingya men.

The two were convicted of possessing classified information regarding security operations in Rakhine state, from where hundreds of thousands of Rohingya Muslims fled during an army-led crackdown the United Nations has described as "ethnic cleansing".

But their sentence provoked outcry over media freedom in Myanmar with calls echoing across the world for their immediate release.

In January Yangon's High Court rejected their initial appeal leaving their fate in the hands of judges at the Supreme Court.

"Our petition asks that the Supreme Court finally provide justice to Wa Lone and Kyaw Soe Oo, reverse the lower courts' errors, and order the release of our journalists," a statement from Reuters said.

The process is expected to take several months.

The only other chance of early release comes from a presidential pardon.

Rights groups have heaped pressure on de facto civilian leader Aung San Suu Kyi to use her leverage to secure a pardon.

But she has steadfastedly refused to intervene in the case in favour of the reporters, describing it as an issue for the courts.

At the time of their arrest the men were probing the extrajudicial killing of 10 Rohingya men at Inn Din village in northern Rakhine state.

The pair insist they were victims of a police set-up.

Testimony during the trial from a whistleblowing officer appeared to validate their claim.

Moe Yan Naing, was initially called as a prosecution witness, but stunned the court by saying superiors had ordered police to entrap the reporters.

His breaking of the ranks was extremely rare from a serving member of Myanmar's secretive security apparatus and he was jailed for a year after giving testimony.

On Friday the ex-policeman walked free after serving his sentence at Yangon's Insein prison -- where the Reuters reporters are also doing their time.

"Members of the police force are suffering under these," he said, calling for reform "as part of the transition to democracy".