'I was stunned and speechless,' says politician whose son took part in attack 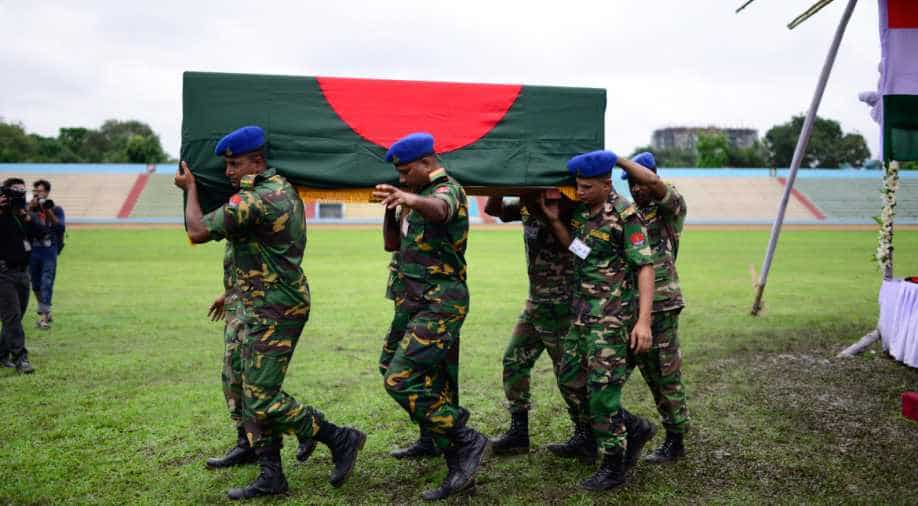 In the months following his son's disappearance, Babul lobbied senior party officials to help find his only son and even scoured the city's morgues. In photo: Soldiers carry a victim's coffin. Photograph:( Getty )

Follow Us
A Bangladeshi politician spoke on Tuesday of his horror to learn that his son was among the suspects who murdered foreigners at a Dhaka cafe, and said many educated young men from wealthy families were going missing.

Imtiaz Khan Babul said his 22-year-old son Rohan Imtiaz, who was killed when commandos stormed the cafe on Saturday, had been a top-scoring student whose behaviour gave no hint he was radicalised before he disappeared last December.

"I was stunned and speechless to learn that my son had done such a heinous thing," Babul told AFP.

"I don`t know what changed him. There was nothing that would suggest that he was getting radicalised. He hardly read any religious books."

Babul, an official with the ruling Awami League party, said had not seen his son since December when he was travelling with his wife to India, leaving the couple's three children in Dhaka.

In the months that followed Rohan's disappearance, Babul lobbied senior party officials to help find his only son and even scoured the city's morgues. As he searched, he met other families who had suffered the same fate.

"I met so many parents whose boys had gone missing," he said. "Even yesterday, one of them was saying that I was lucky that I got the body of my boy. Some of them are not so lucky."

Babul said he believed his son may have been "brainwashed" on the Internet.

Bangladesh's home minister has said the men behind Friday night's attack at an upmarket cafe, in which 20 hostages were killed, were highly educated and from wealthy families.

Security forces shot dead six men when they stormed the cafe, bringing the all-night siege to an end, while one suspected attacker was taken alive and is being questioned.

Police initially identified all six as suspected attackers, but on Tuesday they said they were looking into whether one was a kitchen worker being held hostage.

Relatives of Saiful Islam Chowkider raised the alarm after recognising the 39-year-old among the pictures of suspected attackers that police released after the siege.

"We protested. We said he was never a militant. He was hardworking man and one of the best pizza and pasta makers in Bangladesh," Chowkider's cousin Solaiman told AFP.

"We went to the military, but they would not hand over the body, they said he was a suspect."

Witnesses say the perpetrators of the attack, which the Islamic State group has claimed, spared the lives of Muslims.

Hundreds of foreign firms operate out of Bangladesh and its clothes manufacturing industry is the lifeblood of the economy, accounting for more than 80 per cent of exports.

"We've raised our worries during the meeting. We discussed how to deal with the situation and ensure security for the diplomatic community and the foreign community here," one foreign diplomat told AFP, speaking on condition of anonymity.

The diplomat said they also discussed foreign cooperation in the fight against Islamist extremism in Bangladesh.

The government says homegrown extremists are responsible for the deaths of some 80 secular activists, foreigners and religious minorities murdered over the last three years.

It has repeatedly denied international jihadist networks have a presence in the country, even though IS and a South Asian branch of Al-Qaeda have claimed a number of attacks.

The government has said all the suspected attackers were members of the Jamaeytul Mujahdeen Bangladesh (JMB), a banned local Islamist group.

Among them were a graduate of Bangladesh's leading private university and an 18-year-old student at an elite school.

Another was a former madrasa student from the northern district of Bogra, which is seen as a hotbed of Islamist radicalism.

Police on Tuesday identified a fifth attacker as Shafiqul Islam Uzzal, a 26-year-old from Bogra who had been working as a kindergarten teacher in Dhaka.

Earlier, the bodies of the Japanese victims arrived on a government plane in Tokyo. All seven had worked with the government-run Japan International Cooperation Agency (JICA) in Bangladesh.

Authorities said a plane carrying the bodies of the nine Italian victims had flown out of Dhaka early on Tuesday, while the body of the Indian victim was repatriated on Monday.