Mexico is bleeding. Can its new President stop the violence? 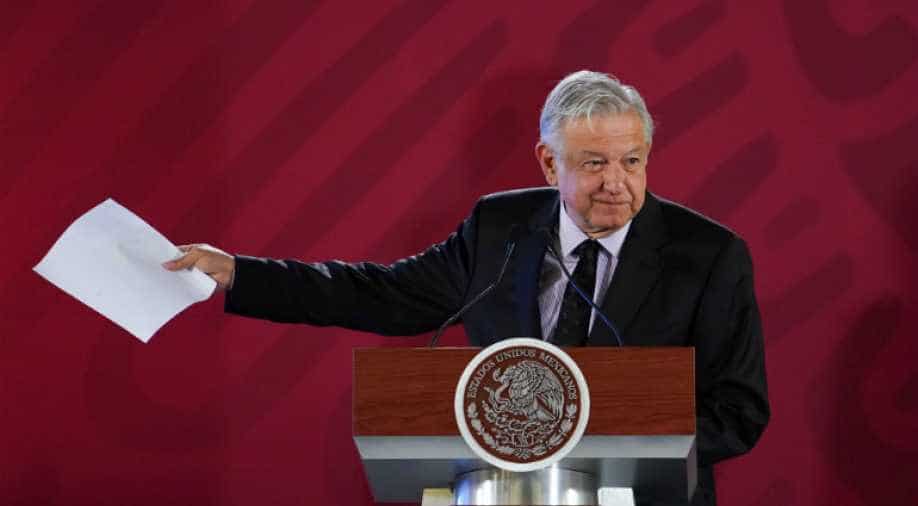 More than 250,000 people have been murdered and 35,000 have disappeared since the beginning of Mexico’s drug war.

Nearly 34,000 people were murdered in Mexico last year, according to new government statistics - the deadliest year since modern record-keeping began.

Of all the challenges facing Mexico's new president, Andres Manuel Lopez Obrador, curbing violence may be the biggest.

Rather than reduce violence, the government’s crackdown actually increased conflicts between and among cartels, according to my research on criminal violence and numerous other studies. It also led to widespread military abuses of power against civilians.

More than 250,000 people have been murdered and 35,000 have disappeared since the beginning of Mexico’s drug war.

Lopez Obrador said on the campaign trail that Mexico must “consider multiple alternatives to achieve the pacification of the country.”

He pitched several possibilities to reduce crime without using law enforcement, including granting amnesty to low-level criminals, negotiating with crime bosses to dismantle their syndicates and confronting the human rights violations committed by soldiers, police and public officials.

Some of those ideas - particularly the controversial notion of negotiating with organized crime - have faded away since Lopez Obrador took office on December 1.

So far, his administration has put more emphasis on traditional law-and-order policies.

In December, he ordered the creation of a Mexican national guard to fight organized crime. Though human rights advocates and security experts fear this approach will repeat past fatal mistakes of militarizing Mexican law enforcement, the lower house of Congress recently approved the measure. It will likely be approved in the Senate.

Lopez Obrador has followed through on one of his campaign proposals for "pacifying" Mexico, though.

Days after being sworn in, the president established a truth commission to investigate the unsolved disappearance of 43 students from the Ayotzinapa teachers college in the southern Mexican town of Iguala in 2014.

Five years after their disappearance, the truth of this infamous case remains elusive.

According to the government of former president Enrique Pena Nieto, the crime was a local affair. Students en route to a protest march in Mexico City were detained by the Iguala police, and, at the mayor's order, handed over to a local gang, which killed them and burned their bodies.

Investigators from the Inter-American Commission on Human Rights could not corroborate this story. In the burn pit identified in 2016, they found no physical evidence of the missing students.

In a scathing final report, investigators said that authorities had ignored crucial evidence that the army and federal police were involved in the students’ disappearance.

A truth commission will help Mexicans "understand the truth and do justice to the young people of Ayotzinapa," Lopez Obrador said on Twitter in announcing its creation.

The Ayotzinapa truth commission will put extraordinary resources and personnel on the case and give the victims’ families and perpetrators a voice in the process - neither of which police investigations in Mexico typically do.

Truth commissions aim to create a collective, participatory narrative of human rights atrocities that not only exposes the perpetrators but also identifies the conditions that facilitated violence. They are a central component of transitional justice, an approach to helping countries recover after civil war or dictatorship.

Countries like Argentina, Guatemala, Brazil and Peru all used truth commissions to reckon with the toll of their bloody dictatorships and wars and give reparations to victims. South Africa famously used a truth commission to document the horrific human rights violations committed under apartheid.

Mexico's situation is different: It has a criminal violence problem, not a civil war.

But my research indicates this pacification strategy may have some promise.

Holding public officials responsible for their corruption would be a major achievement in Mexico.

As the US federal trial of drug trafficker Joaquin "Chapo" Guzman illustrates, corruption penetrates the highest levels of Mexican government.

Since the beginning of its drug war, in 2006, Mexican citizens have filed 10,000 complaints of abuse against soldiers, including accusations of extrajudicial killings and torture. The government has done little to look into those allegations. Nor has it actively investigated most of the murders of 97 Mexican journalists since then.

If an Ayotzinapa truth commission enjoys the full support of federal authorities - which is not a guarantee, given the corruption it will almost certainly uncover - it could restore some faith in Mexico’s justice system. Currently, 97 percent of all crimes go unpunished.

Focusing on truth may also help the country better understand - and therefore address - the root causes of violence in Mexico.

Truth commissions, however, will not immediately solve an incredibly complex security crisis.

As Amnesty International has said, the Mexican government cannot create a truth commission to investigate every mass atrocity of the drug war. Mexico also needs a functioning justice system.

The president's chief-of-staff, Olga Sanchez Cordero, says that pardoning people convicted and jailed for growing, processing, transporting or using drugs - particularly women and offenders from marginalized populations - would stop the cycle of violence in Mexico and encourage petty criminals to disarm.

Mexico's amnesty proposal is not unlike the First Step Act recently passed in the United States, which will result in the early release of about 2,600 prisoners, many of them drug offenders.

Mexico’s prison population has been steadily rising for years.

Between 2000 and 2016, it increased 40 per cent, from 154,765 inmates to 217,868 inmates, according to the Institute of Criminal Policy Research. The number of people jailed in Mexico for drug offenders has also increased markedly.

As in the United States, most prisoners in Mexico come from economically and socially disadvantaged backgrounds, according to the Collective for the Study of Drugs and Law, a non-profit research group.

Should Lopez Obrador's amnesty idea become policy, it would surely be controversial.

Victims of violence in Ciudad Juarez were outraged when, in August 2018, President-elect Lopez Obrador said residents must be "willing to forgive".

Many caught in the crossfire of Mexico's drug war say justice and punishment should come before forgiveness.

But violence in Mexico is so pervasive that, in my opinion, the country must consider every option that might stanch the bleeding.

Truth commissions and amnesties to low level crimes will not pacify the country immediately - but they may bring some of the truth and justice Mexicans so desperately need.