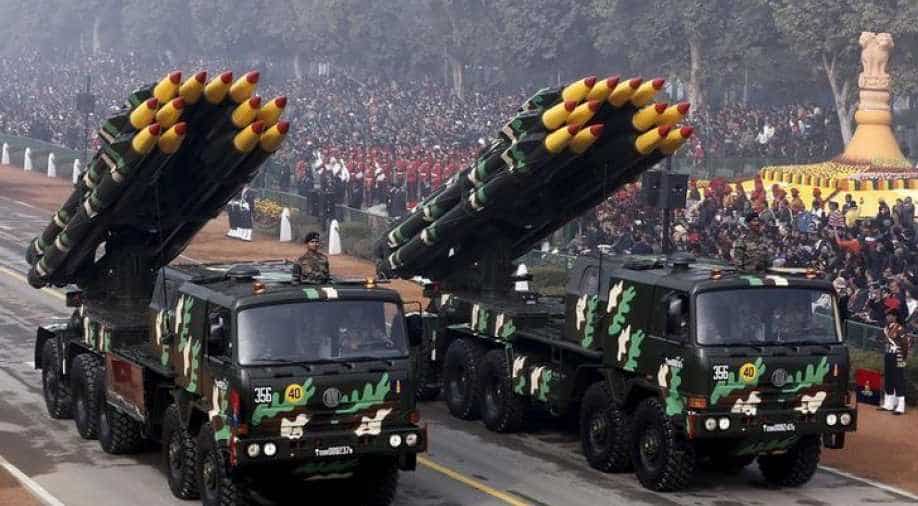 The recent announcement by the defence minister of a negative import list of 101 defence items was seen as a major step to reboot defence manufacturing. The promise of contracts worth Rs 4 lakh crores over five-six years appeared very inspiring.

The decision to withdraw tenders for supply of ammunition ranging from rifle -- fired grenades -- to artillery rounds is sure to dampen spirits in the industry. This is called a 'requirement drift' a frequently occurring phenomenon in a procurement centric organisation.

The recent announcement by the defence minister of a negative import list of 101 defence items was seen as a major step to reboot defence manufacturing. The promise of contracts worth Rs 4 lakh crores over five-six years appeared very inspiring.

For the industry, there was some assurance that if it could get its act together, it could seize the day. The government has been trying to bouy up defence manufacturing since the past six years, however not much happened on ground due to a host of reasons.

One foremost reason has been the lack of clarity on how to take it forward. Alongside the initiative there is a pressing need to change the fundamental approach to acquisitions, the military's method of establishing the need, formulation of qualitative requirements (QR), process of trials and budgetary decision making process.

An untrammelled long term view is essential, irrespective of emergent requirements that may crop up due to changes in the security landscape.

What then needs to be done to shore up defence manufacturing? Simply put it is ownership by the armed forces and a facilitative environment by those in the decision making chain. Every one has to have a genuine commitment towards indigenous programs and the acquisition community needs a new breed of people. Coming to framing of qualitative requirements (QRs), a principal responsibility of the user ; its time to base it on a mission engineering exercise. QRs have to be in sync with operational realities on ground. One singular reason for fanciful QRs is that these are attribute based rather than capability. One has to go through the recent RFI on the 8x8 Armoured Personnel Carrier to realise that such a system will have to be specially crafted for India with technologies sourced globally. Obviously, acquisition and system readiness costs will be exorbitant, besides long acquisition time frames.

More often than not acquisition of indigenously developed systems get stymied due to non conformance to certain not so critical attributes like weight , turning radius etc., rather than overall system maturity. MBT Arjun is agile, fires accurately and offers a significantly higher level of crew survivability than T 90 , but has not found support from the military. Like the A10 combat aircraft , Arjun could become a terrific tank to be in during war. Bharat Forge`s 155 mm gun is world class albeit with some deviations.

I remember, almost three decades back Dr Abdul Kalam telling me that if the Army accepted a mine system that was indigenous and fulfilling most QRs, our factories will manufacture it and people will get employment.

The next issue is trial evaluation and operational clearance. This has to be a time bound phenomenon, not an endless activity stretching onto several years. Present procedure ensures that induction and obsolescence occur concomitantly, with real costs, real schedules and real performance worse than what gets contracted.

Coming to the last issue of contract negotiations. A closer look at the MOD list indicates that most items are being manufactured under Department of Defence production. How exactly does the MOD intend to apportion the quantities; if FSAPDS rounds, first item on the list or wheeled armoured fighting vehicle at serial no 70 gets made by both ordnance factory (OF) and private entity. Any assurance of guaranteed buy back to both?

With regard to ammunition, a special time bound initiative is required to develop indigenous capability, in view of the recurring nature of the requirement and difficulty in assessing the quality and expired shelf life of imported ammunition. This issue affects training on ground, adversely impacting gunnery skills.

Acquisitions are to be taken up as a capability development effort and not a procurement process. It should result in creation of not only a war fighting capability but also an industrial capability. We should aspire to be self reliant in areas of military technology deemed essential for mission success. This means possessing baseline know how needed to design, develop, manufacture and maintain critical defence equipment and sensors. An indigenous defence industrial base is essential for life cycle mission readiness.

A three pronged hybrid strategy with an integrated view of capability development could provide the answer:

-- Development of Complex Systems. Projects for manufacture of new systems need to be taken forward through collaboration rather than competition. Collaborative prototyping aims at collaboration between public and private sector as has been done in the Dhanush program, wherein capabilities of Army maintainers, OFB and private sector were consolidated. Why not roll out strategic partnerships between OFB / DPSUs and private entities. In response to RFI for wheeled APC , 15 - 20 vendors have responded, much like the response to Army recruitment rallies. Those who do not make the cut finally, will lose further incentive to participate in future programs.

-- Technology Incubation. There is a need to work on creating a culture of innovation and creativity all around. The IDEX initiative should be expanded in scope and include development of next generation sub systems for future combat systems.

Consolidation of defence industrial capabilities has taken place in US, Europe and Russia as a response to shrinking markets. Making several Indian companies develop prototypes and offer for competitive evaluation is a colossal waste of national resources. Most advanced nations have trail blazed this route by putting the entire weight of the government, scientific community and industry in developing local products and capabilities. Israel is one shining example.

Prime Minister Narendra Modi has again echoed the mantra of AatmaNirbhar Bharat. He has aptly drawn an analogy between family and country to explain self reliance.

The Armed Forces need to spearhead this effort by assuming ownership and handholding the industry. It will give a strong impetus to 'Proudly Made In India' becoming a global brand of quality and reliability. It is time to move from panic procurement to planned acquisitions.

This calls for a change of accepted practices and entrenched ways of working and getting on with thinking beyond the algorithm. Time to change the Old Guard.