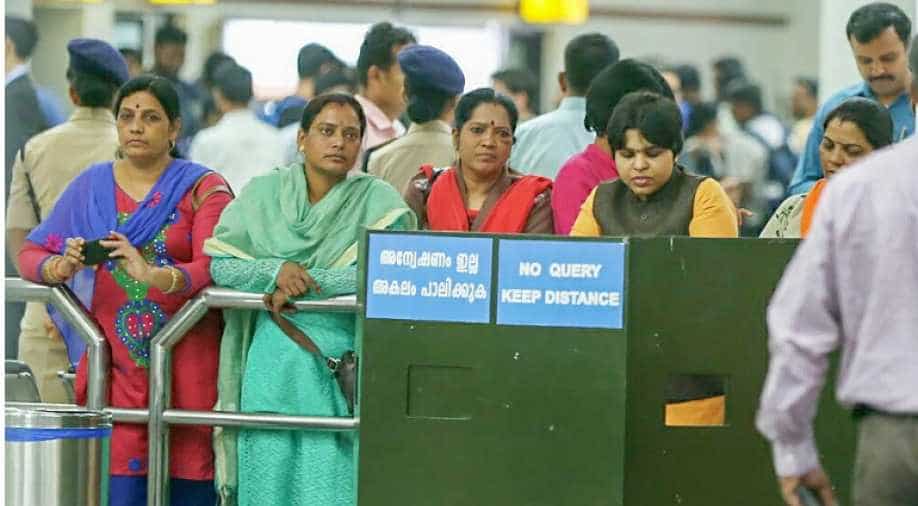 Narrating her ordeal, Desai said that cab drivers were not ready to take her and her 7-member team to Sabarimala fearing agitation.

Activist Trupti Desai, who was forced to return to Pune without visiting Sabarimala Temple owing to a possible disruption of law and order, said she will next visit the hill shrine unannounced using "guerilla tactics"

"When we landed at the Kochi airport, protestors gathered there hurled abuses at us and threatened us to go back. The police, too, requested us to leave saying anything can happen. We didn't want anything to happen to the people of the state because of us, so we decided to return. Police have told us that they'll provide us security the next time we visit. This time we went there after announcing, but the next time we won`t announce that we`re visiting, but will follow guerrilla tactics," she told ANI.

Narrating her ordeal, Desai said that cab drivers were not ready to take her and her 7-member team to Sabarimala fearing agitation.

The activist further said the Kerala government had failed in providing security to women wanting to visit Sabarimala. She further condemned the "hooliganism" witnessed at the Kochi airport upon her arrival.

"Protesters were resorting to violence and hooliganism, they should not have done that. They call themselves Lord Ayyappa`s devotees but I don't think they can be his devotees. They were verbally abusing us and threatening us. If they wanted to oppose us, they should have protested in Nilakkal but they knew that if we reached Nilakkal, we would advance to Pamba and return only after Darshan. They were scared and hence stopped us at the airport itself," she added.

Desai, who is the founder of the Bhumata Brigade, landed in Mumbai a few hours ago. However, she was stranded in the airport itself as protesters had gathered outside the airport to oppose her decision to visit Sabarimala. She and the other women were later brought out with the help of Central Industrial Security Force (CISF) jawans and Mumbai police personnel.

The social activist had, on November 14, written a letter to Kerala Chief Minister Pinarayi Vijayan, stating that she would not leave Kerala if she was not allowed to enter the holy hill shrine.

The Sabarimala temple and surrounding areas witnessed a string of protests recently over the Supreme Court`s decision to quash restrictions on the entry of females aged between 10 and 50 years into the shrine.

As the Temple reopened yesterday for a two-month long pilgrimage season, Section 144 of Criminal Procedure Code (CrPC) was imposed in Nilakkal, Pamba, and Sannidhanman as a precautionary measure.