US returns 248 antiquities valued at $15 million to India, including 12th-century bronze Shiva Nataraja 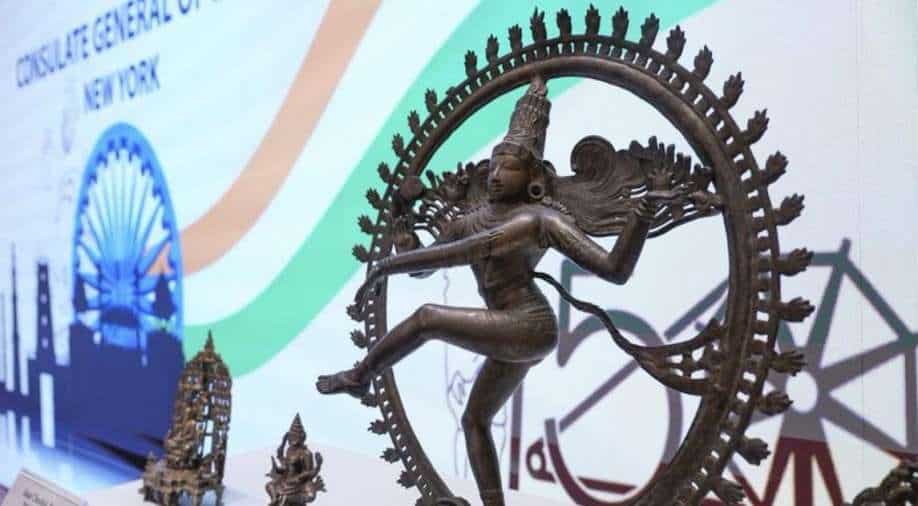 The US returned the 248 antiquities to India during a repatriation ceremony. (Image credit: @lindamartin567 ) Photograph:( Twitter )

Among the items returned, 235 were seized pursuant to the investigation of Jailed art dealer Subhash Kapoor

The US on Thursday returned 248 antiquities, including a 12th-century bronze Shiva Nataraja, valued at an estimated $15 million to India, the "largest" such transfer of antiquities to the country.

"This extraordinary assemblage of artifacts, recovered from five different criminal investigations over the past decade, embodies the timeless cultural and cosmic bridge between ancient and modern-day India," Manhattan District Attorney (DA) Cy Vance, Jr said in a statement.

The US returned the 248 antiquities valued at an estimated $15 million to India during a repatriation ceremony attended by India Consul General Randhir Jaiswal and US Homeland Security Investigations (HSI) Deputy Special Agent in Charge Erik Rosenblatt.

Jaiswal expressed gratitude to the Manhattan DA's Office for its support and cooperation in the return of antiquities to India. "We look forward to our continued engagement to strengthen cultural ties between India and the United States," he said.

Vance said the event also serves as a potent reminder that individuals who "maraud sacred temples" in pursuit isof individual profit are committing crimes not only against a country's heritage but also its present and future. He said the 248 pieces is the "largest such transfer of antiquities" to India.

Among the items returned, 235 were seized pursuant to the investigation of Jailed art dealer Subhash Kapoor.

The District Attorney's office said that for many years, the Manhattan DA's Antiquities Trafficking Unit, along with law enforcement partners at HSI, investigated Kapoor and his co-conspirators for the illegal looting, exportation, and sale of ancient art from Afghanistan, Cambodia, India, Indonesia, Myanmar, Nepal, Pakistan, Sri Lanka, Thailand, and other nations.

Kapoor and his co-defendants generally smuggled looted antiquities into Manhattan and sold the pieces through his Madison Avenue-based gallery, Art of the Past. From 2011 to 2020, the DA's Office and HSI recovered more than 2,500 items trafficked by Kapoor and his network.

The total value of the pieces recovered exceeds USD 143 million.
HSI New York Acting Special Agent in Charge Ricky Patel said these artifacts are part of India's rich cultural heritage and they are going back to the people of India.

"When items like these are stolen and looted, we are determined to make things right, and ultimately return them home where they belong," Patel said.

Two of the co-defendants have since been convicted: Richard Salmon in October 2020 and Neil Perry Smith earlier this year. Previously, three others were also convicted: Selina Mohamed (2013), Aaron Freedman (2013), and Sushma Sareen (2014).

The remaining items returned included 10 pieces seized from Matreiya, the former gallery of known trafficker Nayef Homsi who was convicted by the District Attorney's Office in 2015.

Other items from the same seizure were repatriated to India in August 2020. A bronze Shiva Nataraja, circa 12th century, valued at USD 4 million, that was stolen in the 1960s from a temple and smuggled into New York before being sold by Doris Wiener, whose daughter, Nancy Wiener, was convicted by the Office in 2021.

The Asia Society, the unwitting recipient of the piece, cooperated fully with the investigation.

Another item returned was a bronze Nandikesvara and bronze Kankalamurti, which were stolen from the Sri Narasinganata Temple in India in May 1985 and resurfaced at separate auctions during this year's Asia Week.

Manhattan-based Bonhams Auction House, the unwitting recipient of the piece, cooperated fully with this investigation.

As of Thursday's ceremony, the DA's Office has returned 516 antiquities to 12 nations since August 2020, including, in recent months, 27 relics to Cambodia, 33 treasures to Afghanistan, and 104 artifacts to Pakistan.

During the past two months, the Antiquities Trafficking Unit also repatriated 16 pieces associated with the infamous Spanish conquistador Hernan Cortes to Mexico.

This collection of priceless 16th Century manuscripts "including letters, royal decrees, and other legal documents" was stolen from Mexico's National Archive and later appeared at numerous galleries and auction houses in the same year.

New York-based Swann Gallery and Bonhams Auction House, the unwitting recipients of the stolen manuscripts, cooperated fully with this investigation.