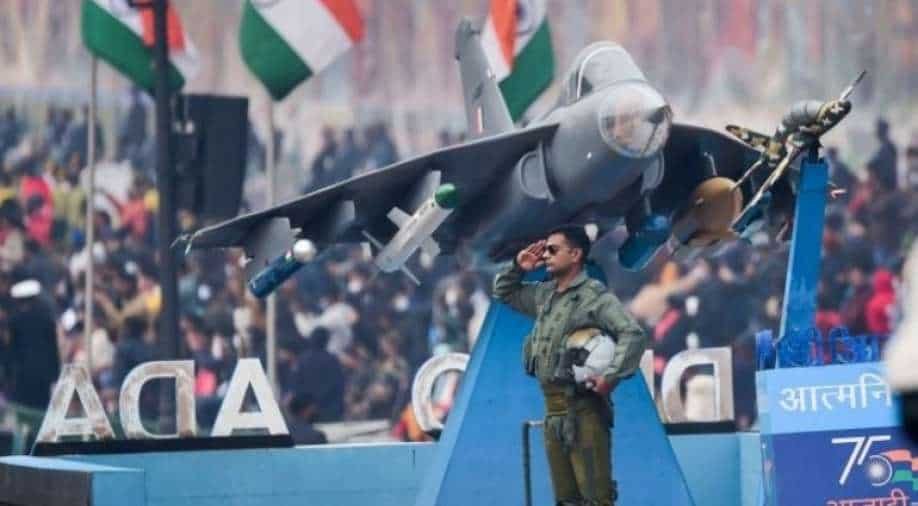 Army colums on display during the full dress rehearsal of the Republic Day Parade 2022, at the Rajpath in New Delhi Photograph:( PTI )

Police also said that people will have to adhere to all Covid protocols, such as wearing face masks and maintaining social distancing, at the programme on Rajpath on January 26

People attending the Republic Day parade must be fully vaccinated against Covid and children below 15 years of age will not be allowed to attend the function, a set of guidelines issued by the Delhi Police stated.

Police also said that people will have to adhere to all Covid protocols, such as wearing face masks and maintaining social distancing, at the programme on Rajpath on January 26.

"It is necessary to have both doses of anti-coronavirus vaccine. Visitors are requested to bring their vaccination certificate," the Delhi Police tweeted.

It said that children below 15 years of age are not allowed in the function.

The national Covid vaccination programme, which initially started with health care and frontline workers on January 16 last year, was gradually extended for all those above 18 years of age.

From this month, children in the age group of 15-18 years started getting vaccinated, and healthcare and frontline workers and those aged 60 and above with comorbidities are being given 'precaution' doses, amid a spike in cases due to the Omicron variant.

Listing the guidelines, the Delhi Police tweeted that the seating blocks will open for visitors at 7 a.m. and requested them to arrive accordingly.

Also see | The making of a republic: Negotiations that led to creation of India as a republic

Since parking is limited, visitors have been advised to use carpool or taxi. They are also requested to carry a valid identity card and cooperate during security check, it said.

"There will be a provision for depositing remote-controlled car lock keys in each parking area," police tweeted.

On January 23, Delhi Police Commissioner Rakesh Asthana had said over 27,000 police personnel have been deployed for security duties in the national capital and anti-terror measures intensified in view of Republic Day.

On Republic Day security arrangements, Mr. Asthana had said 27,723 Delhi Police personnel including 71 DCPs, 213 ACPs and 753 inspectors have been deployed in the capital for the parade. They are being assisted by 65 companies of CAPFs.

He had mentioned that the anti-terror measures taken include blockades (nakka bandi) at various places, checking of vehicles, hotels, lodges and dharamshalas and various verification drives like that of tenants, servants, labourers.

In the last two months, the anti-terror measures have been intensified, the Commissioner has said.

Counter drone technology is being used for air space security. The security in and around the area where the Republic Day celebrations will take place has also been secured with the help of the Delhi Police and other agencies, Mr. Asthana had said.

To create awareness, he had said that through social media, police are also putting out facts and important information so that no anti-social element runs a misinformation campaign.

About traffic arrangements, Mr. Asthana had said an advisory has already been issued stating specific restrictions on routes so that no inconvenience is caused to general public.

According to a recent order, operation of sub-conventional aerial platforms, including UAVs, paragliders and hot air balloons, over the national capital have been prohibited in view of the Republic Day celebrations.

The order came into effect on January 20 and would remain in force till February 15.