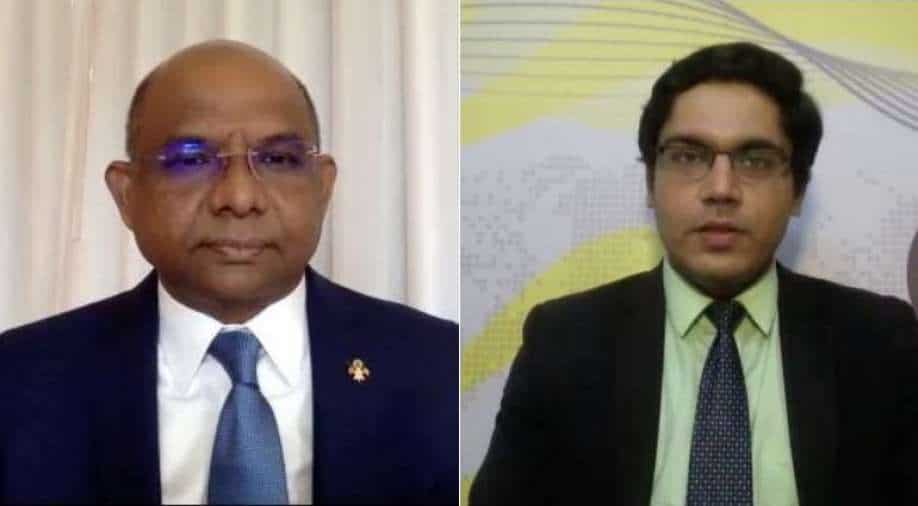 Abdulla Shahid thanked India for supporting his candidature. "India recognised the important role a country like the Maldives can play in the international stage," he said.

In his first-ever interview since his massive victory for the post of President of the 76th session of the United Nations General Assembly (UNGA), Maldives Foreign Minister Abdulla Shahid has listed dealing with the Covid crisis, UN reforms among his five key priorities.

Shahid received 143 votes at UNGA during Monday's voting, far higher than the 96 votes required, with his one-year tenure all set to begin from this September.

Speaking to WION's Principal Diplomatic Correspondent Sidhant Sibal from New York, Shahid said, "We need to make sure we provide vaccines to all".

He hoped that a 'common definition' would be reached by the membership when it comes to the issue of terrorism as envisaged under the Comprehensive Convention on International Terrorism (CCIT).

India has proposed CCIT in 1996 which calls for a common definition on the issue of terrorism, but it continues to languish due to a lack of consensus.

Shahid thanked India for the support of his candidature saying, "India recognised important role a country like the Maldives can play in the international stage".

India had backed his candidature, with the announcement being first made during India's foreign secretary Harsh Shringla's Maldives visit in November.

During the visit of External Affairs Minister S Jaishankar to the Maldives in February, India reiterated its continued backing for the Maldives FM's candidature.

Sidhant Sibal: Your reaction after being elected for the post of president of United Nations General Assembly?

Abdulla Shahid: I am deeply humbled by this election. I am also at the same time a proud Maldivian today. This is a great honour for the Maldivian people, for the nation. The Maldives is a small country, but we have been responsible and committed member of the United Nations for the last 55 years.

We became the member of the United Nations three months after we became independent. And I think this election has clearly shown that the current President Ibrahim Mohamed Solih's foreign policy is well-respected and received by the international community. It is indeed a great honour for the Maldives.

Sidhant Sibal: You got more than 140 votes at the United Nations General Assembly, what does it show? And how has the process been?

Abdulla Shahid: The number of votes we received indicated how the international community has received the Maldives.

You would know, last year has been a year of despair, death, sorrow, and pain for the entire world.

I proposed the Presidency of Hope, which I promised will help us overcome these difficult times. We should be aiming to go over the hill and had proposed that together the United Nations can lead this effort.

I believe the membership was also eager to take on this presidency of hope and give it to their constituents, the citizens of the world.

Sidhant Sibal: The Presidency of hope has five-point agenda. If you can list these priority areas?

Abdulla Shahid: I proposed my presidency, the presidency of hope will be built on five rays of hope. The first ray of hope is recovering from COVID-19, it is going to dominate the international agenda for several years to come, but we need to concentrate on three main points.

Number 1 is a clear pathway in dealing with COVID-19, with the ultimate aim of eradicating it.

Number 2 is vaccine equity, no one is safe until everyone is safe. We need to make sure we provide vaccines to all.

Number 3 is dealing with the economic impact it has created on all our country. My second ray of hope is rebuilding sustainably.

We need to reset the clock and put into the recovery phase and make it into a decade of recovery as well. The third ray of hope of my presidency would be responding to the needs of the planet, both Sidhant, you and me, everyone, here we can feel and see our mother earth planet in pain. We need to address it.

The pandemic once again has taken focus again from climate-related issues, but these are not the issues we can put on the backburner. We need to start addressing it now, many major conferences coming now. COP26 is coming, the oceans conference is coming up, the COP15 on biodiversity is coming up, and the energy summit is coming up.

All these conferences are going to create momentum which I am proposing United Nations General Assembly should harness and turn into action. Fourth ray of hope I am proposing is, respect the rights of all, human rights have to be the centre of all developmental issues and all issues.

I believe, United Nations Human Rights Commission, and Human Rights Council, and the United Nations General Assembly should together be conscious of the international community on human rights issues. We should prioritise such issues like issues of gender-based violence, violence against children, gender parity.

We need to prioritise youth-related issues. These are the issues we should start addressing while respecting the rights of all.

Fifth and the final ray of hope is revitalising the United Nations. UN needs to be stronger, it needs to be transparent, accountable, and it needs to be efficient to deliver to the nations.

UNGA needs revitalisation. It’s a process that has been ongoing, and we need to continue with the reform of the Security Council, we need to make sure the Economic and Social Council is stronger.

Sidhant Sibal: On the issue of terror, what will be the key focus? Especially when it comes to consensus on the Comprehensive Convention on International Terrorism, something that has been languishing since 1996 due to lack of consensus?

Abdulla Shahid: Well, the United Nations General Assembly 6th Committee, the legal committee, has been working on this definition, as you said, for a very long time. I hope the definition would be reached by the membership soon. Because we need a clear definition of terrorism to be reached soon.

Sidhant Sibal: Would you push for greater physical meetings? What are your plans to invite global leaders back to New York for the UN High-Level Week?

Abdulla Shahid: I have spoken to the secretary-general on this, I have also spoken to President about it. The secretariat and the current President are working on it. I will be consulting with them in detail again during this week. We need General Assembly to come back in some forms of meetings that are important.

Yesterday we had a session in person, 1+1, meaning in the General Assembly hall, each delegation is represented by one plus one which is a very limited number of people in the hall. Social distancing has to be followed, wearing of the mask has to be followed.

Sidhant Sibal: Any signature events that you want to do as the President of the General Assembly?

Sidhant Sibal: How do you see India's support? India had extended the support as early as November 2020?

Abdulla Shahid: Well, I thank the Indian government, the Prime Minister, the foreign minister and the foreign secretary for the outstanding support for Maldives candidature. They were very kind, and I think India recognised the important role a country like the Maldives can play on the international stage, especially as the President of the General Assembly. I am also grateful to many-many other countries, who have so kindly expressed their support and continued backing me during the campaign.

Sidhant Sibal: After a long time a South Asian has reached this post, so how will it increase the positioning of South Asia?

Abdulla Shahid: As you said, it has been a while since a South Asian diplomat has presided over the General Assembly, it is indeed a great honour for me and I will try my best to keep the high level of diplomats that South Asia has created.