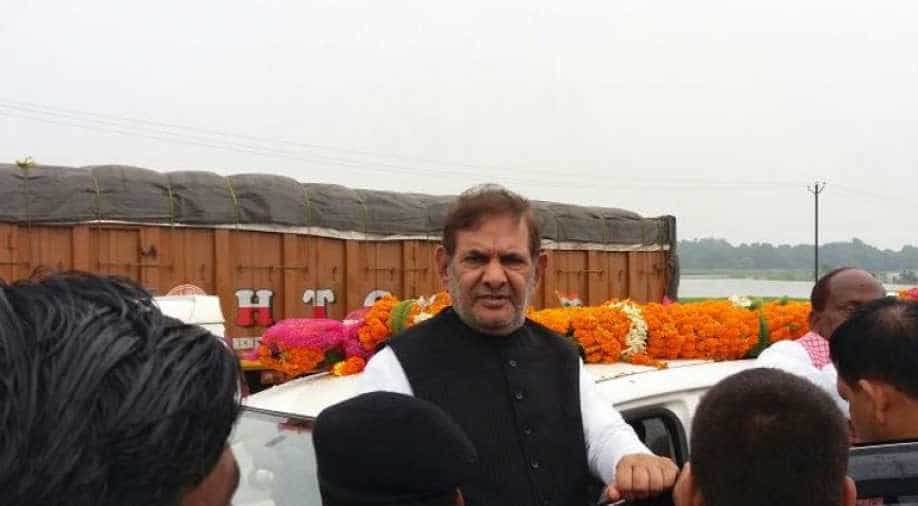 Asking all opposition parties to unite to fight the ruling BJP, senior socialist leader Sharad Yadav said on Sunday that he does not see any possibility of a third front emerging before the 2019 general elections.

Asked whether the efforts by TMC chief Mamata Banerjee and TRS head K Chandrashekar Rao to cobble up a federal front of regional parties would damage the opposition unity, he said, "I don't think the third front will come into existence. Wait for some time, the people trying to form a third front will themselves start talking about a united opposition."

"This time, protecting the Constitution is the challenge. I am satisfied with the success achieved in uniting all parties and organisations on the platform of a 'shared legacy' to bring India out of the trouble the Modi government has pushed it into."

The Janata Dal (United) leader told PTI-Bhasha that efforts by a few political parties to provide an alternative to the BJP and the Congress would not affect the unity among the other opposition parties to put up a formidable front against the saffron party.

Sharad Yadav said he is regularly communicating with all political parties in opposition and will unite them when the time comes.

Stressing that a united opposition is the only option, he said if the parties ignore this fact for narrow and regional gains, the BJP would teach them a lesson in the upcoming elections.

Citing his political experince of over four decades, Sharad Yadav said, "Whenever the political, social and economic situation in the country has turned delicate, opposition parties have come together to fight the opportunist forces."

He said the country's social fabric today is under duress, like it was during the Emergency.

Asked about comparing the current situation in India to that during the Emergency, Yadav said: "It is for the first time in the country that a central government is running on the recovery made from fuel prices."

Citing government data, he said the central government, which has a total budget of Rs 24 lakh crore, has recovered Rs 19.61 lakh crore by taxing the consumers on petrol and diesel. This data helps understand the amount of stress on the common people, he said.

Sharad Yadav alleged that economy is in bad shape following the sudden demonetisation of high-value currency in 2016 and the implementation of the Goods and Services Tax last year. He also said that the constituional provisions are regularly breached.

The JD(U) leader acknowledged that bringing together parties with similar ideologies is a serious task but said it is not impossible.

Asked if mistakes by young leaders of the Congress, the Samajwadi Party, the Rashtriya Janata Dal and the Rashtriya Lok Dal contributed to the BJP's spectacular rise, he said, "People who dismiss experience are punished, but when they correct those mistakes, they are immediately rewarded also."

He said the result is before everyone to understand.

Sharad Yadav cited the example of Akhilesh Yadav did not listen to Samajwadi Party patriarch Mulayam Singh Yadav during the Uttar Pradesh Assembly polls and lost to the BJP. He said that when Akhilesh corrected that mistake by joining hands with BSP chief Mayawati for the two by polls in Gorakhpur and Phulpur, both of them emerged winners.

The JD(U) leader also gave the example of Bihar Chief Minister Nitish Kumar who walked out of the Grand Alliance with the Congress and the Rashtriya Janata Dal after more than a year of winning the state polls. But soon he lost the assembly bypolls in the state in March, Yadav said.

"So those who will not correct (their mistakes) and unite will be taught a lesson by the BJP," he said.

He said his supporters have formed the Loktantrik Janata Dal (LJD) after Nitish Kumar severed ties with the Grand Alliance, but he made it clear that he is not part of the new party. The socialist leader, however, said he will participate in the LJD's first national conference as a special invitee on May 18.

He said the LJD will emerge as an important pillar of the opposition unity in the future.