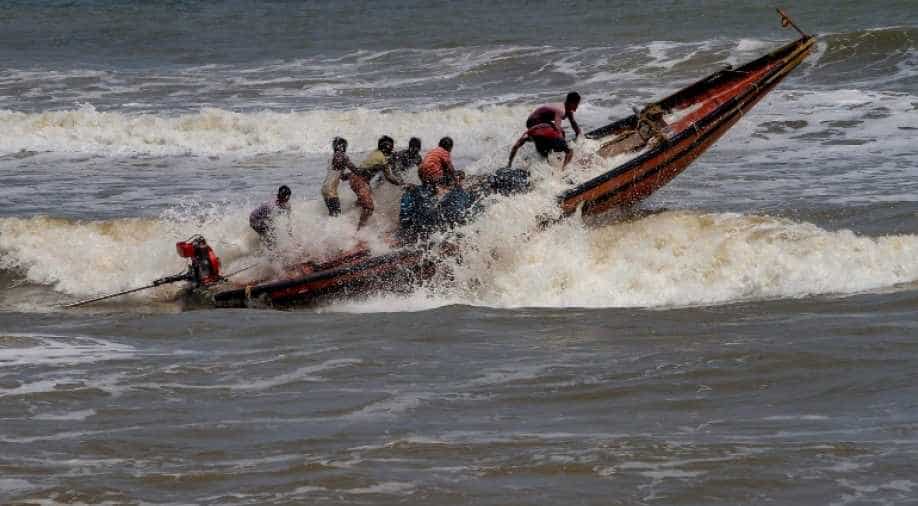 With the warning of a heavy rainfall in parts of Gujarat, the state government has decided to deploy NDRF personnel in coastal areas of Saurashtra and Kutch from Tuesday morning.

A severe cyclonic storm is likely to hit Gujarat on June 12 night with a wind speed of 130-140 kilometres per hour, the India Meteorological Department (IMD) said on Monday night.

The Cyclone Warning Division of the IMD said the deep depression over east-central and adjoining Southeast Arabian Sea and Lakshadweep lays centred at about 320 km northwest of Aminidivi (Lakshadweep), 680 km south-southwest of Mumbai (Maharashtra) and 840 km south-southeast of Veraval (Gujarat).

"It is very likely to move nearly northward and cross Gujarat coast between Porbandar and Mahuva around Veraval and Diu region as a Very Severe Cyclonic Storm with wind speed 130-140 kmph gusting to 155 kmph during midnight of June 12," the Cyclone Warning Division bulletin said.

The state has been put on alert following the IMD prediction.

With the warning of a heavy rainfall in parts of Gujarat, the state government has decided to deploy NDRF personnel in coastal areas of Saurashtra and Kutch from Tuesday morning.

The government will also put the Army, the Navy and the Coast Guard on alert.

The India Meteorological Department (IMD) has issued a warning of heavy rains with winds blowing at the speed of over 110 km on June 13 and 14 in coastal areas of Saurashtra and Kutch.

It has also advised fishermen against venturing into the sea in the next few days while ports have been directed to flag a danger signal.

"A heavy rain warning has been issued for Saurashtra and Kutch on June 13 and 14 due to the depression in the Arabian Sea which will turn into a severe cyclonic storm," state meteorological department director Jayanta Sarkar told reporters in Ahmedabad.

After the weather warning, the government convened a high-level meeting in which it decided to deploy 15 teams of the NDRF (National Disaster Response Force) immediately.

"We have alerted all district collectors of coastal Gujarat to take immediate steps keeping in mind the likelihood of a cyclone," Additional Chief Secretary, Revenue, Pankaj Kumar told reporters.

"Besides, we have called a meeting of all the defense forces. We have decided to deploy 15 teams of NDRF in coastal areas of Saurashtra and Kutch from tomorrow morning. We have asked the Army, Navy, Air Force and Coast Guard to remain ready to help the state in any untoward situation," he said, adding that the government is monitoring the situation along with the MeT department and ISRO.

On Monday, the depression over south-east adjoining Lakshadweep and east-central Arabian Sea, moved northwards with a speed of about 31 kilometres per hour.

"It (Cyclone) is very likely to cause an adverse impact in terms of wind and rainfall over Saurashtra and Kutch, mainly on June 13 and 14," a statement by the MeT department said.

"It is very likely to cause an adverse impact in terms of wind and rainfall over Saurashtra and Kutch, mainly on June 13 and 14," the release said.

Gujarat is at present reeling under severe heat wave as the maximum temperatures in major cities, including Ahmedabad, hovering over 43 degrees Celsius since the last week of May.

Sarkar said the severe cyclonic storm is likely to cause heavy rains and winds in the coastal districts of Saurashtra, like Bhavnagar, Amreli, Junagadh, Jamangar, Porbandar, Dwarka and also Kutch.

The setting of monsoon, which usually happens around June 15, will be further delayed as the cyclonic storm could disturb its advancement.

The monsoon was anyway expected to be delayed by a week due to its late arrival in Kerala, said another official.