Sabarimala shuts. Despite Supreme Court order, no woman is allowed to enter 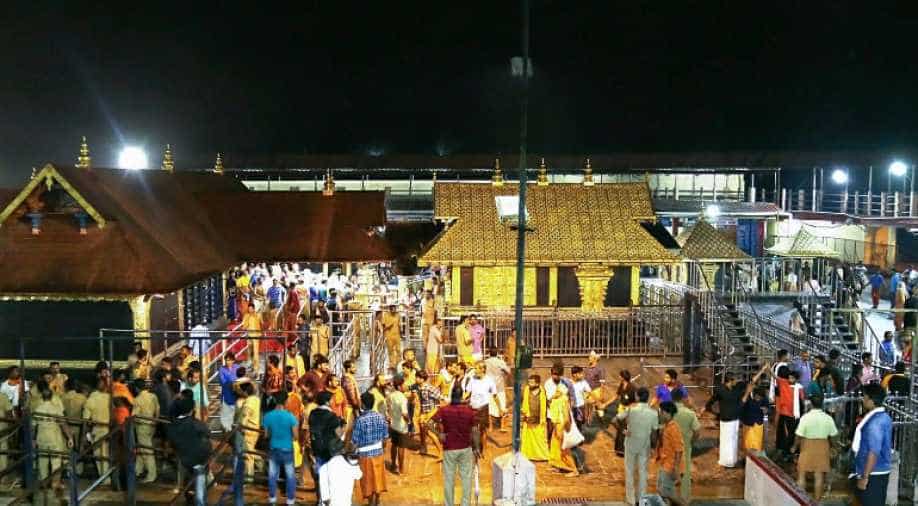 Valiant attempts by around a dozen women came to nought as frenzied devotees of Lord Ayyappa, the eternally celibate deity, heckled and hassled and forced them to retreat.

The doors to Sabarimala temple closed Monday night, six days after opening for the first time since the Supreme Court lifted the ban on entry of women of menstruating age, but climbing the 18 "sacred steps" leading to the sanctum sanctorum proved a tall order for them.

Valiant attempts by around a dozen women, including activists and journalists in the 10-50 years age group to script history came to nought as frenzied devotees of Lord Ayyappa, the eternally celibate deity, heckled and hassled them and forced them to retreat.

Yet another woman in the "barred" age group made a futile attempt Monday to reach Sabarimala but was turned back by agitated protesters.

Bindu, a Dalit activist, who was proceeding to Pamba at the foothills of Sabarimala temple from where devotees undertake an arduous 5 km trek to the shrine, was given police protection at her request, officials said.

However, when the Kerala State Road Transport Corporation bus she was travelling on with police personnel was about to reach Pamba, a group of BJP workers and those opposing the entry of girls and women aged between 10 and 50 years into the temple, blocked the road and forced her to alight.

She was then escorted to safety in a police jeep, officials said.

'Melsanti' or the head priest and other priests stood on both sides of the idol of Lord Ayyappa and recited divine song "Harivarasanam" and began putting off the lamps in the sanctum sanctorum halfway down the rendition.

As the last line was sung, the doors were closed and locked, shutting out, at least for the time being, spirited women of menstruating age from offering prayers to the deity.

The iron gates to the shrine were opened on Wednesday and every day since then women of the "barred" age group made brave but futile attempts to enter the shrine. Six women were prevented from entering the temple Sunday alone.

Kerala women's rights activist Rehana Fathima and Hyderabad journalist Kavitha Jakkal, wearing helmets and khaki, and surrounded by a police contingent, could manage to go up to Valiya Nadappandhal, the queue complex located a few metres away from the holy 'pathinettam padi', the 18 sacred steps, but not beyond.

Several people, including journalists, were injured on Wednesday as police cracked down on protesters who were up in arms against Kerala's Left Front government for its decision to enforce the Supreme Court order.

Hindu fringe groups called a strike the next day and both the Congress, the main opposition party in Kerala, and the BJP, which is desperately seeking to expand its footprint in the state, lent support to the agitation.

Meanwhile, the Travancore Devaswom Board (TDB), which manages Sabarimala temple, is meeting on Tuesday to discuss how to make an intervention in the Supreme Court while protecting the "interest of devotees".

"The TDB has the legal responsibility to protect the interest of devotees. We also have to look at the rituals and customs of the temple. The board will make its intervention in Supreme Court without harming this," its chief A Padmakumar told reporters in Thiruvananthapuram.

He said the meeting would decide the "nature" of the report to be submitted to the apex court.

The Supreme Court Monday said it would decide tomorrow as to when the petitions seeking a review of its Sabarimala verdict will be listed for hearing. In all, 19 review petitions are pending before it for hearing.

The state's Devaswom Minister Kadakampally Surendran welcomed the TDB's decision to approach the Supreme Court with a comprehensive report about the recent developments in Sabarimala.

"It's a good decision...The TDB's move is to bring to the notice of the Supreme Court the difficulties faced by the real devotees," Surendran said.

He conceded that the LDF government was caught between the "devil and the deep sea" while executing the apex court order.

The Congress-led UDF has decided to hold a series of foot marches, vehicle rallies and meetings across the state to explain to people its stand on the issue and "expose" the ruling CPI(M) and BJP's "hidden agenda".

The temple will open briefly on November 5 evening for the next day's 'Chithira Attavisesham' to celebrate the birth anniversary of Chithira Thirunal Balarama Varma, the last king of Travancore.

The doors of the shrine will open on November 17 for the three-month-long Mandalam Makaravilakku celebrations when lakhs of devotees from the country and abroad visit the place every year.

If the Supreme Court does not stay or overturn its own verdict by then, enforcing its historic order may prove to be a daunting task for the Kerala government.