'Nothing can stop you from achieving', says wife of late Major who joined Indian Army 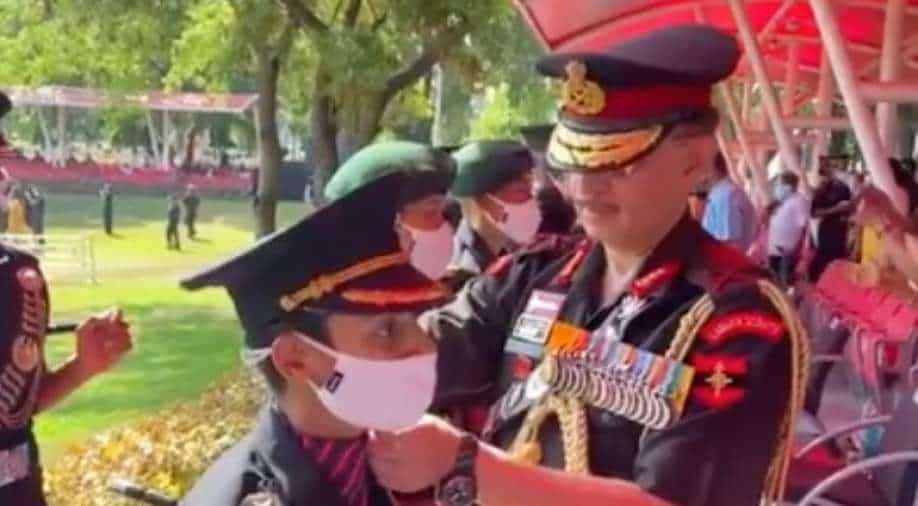 Among the 198 cadets passing out of the Indian Army Officer’s Training Academy (OTA) in Chennai was Nitika Kaul, wife of Late Major Vibhuti Shankar Dhoundiyal, who was killed in action in February 2019, fighting against terrorists in Pulwama, Jammu and Ka Photograph:( Twitter )

About six months after her husband made the supreme sacrifice for the country, Nitika opted to join the Indian Army under the Short Service Commission

Among the 198 cadets passing out of the Indian Army Officer’s Training Academy (OTA) in Chennai was Nitika Kaul, wife of Late Major Vibhuti Shankar Dhoundiyal, who was killed in action in February 2019, fighting against terrorists in Pulwama, Jammu and Kashmir. At the time of her husband’s demise, the couple were barely ten months into their marriage.

About six months after her husband made the supreme sacrifice for the country, Nitika opted to join the Indian Army under the Short Service Commission. While the Indian Army relaxes the age criteria for the war widows (Veer Naris) that want to join the service, the training and selection process is as tough as usual.

Niikta had undergone the 11-month gruelling, multi-disciplinary training regimen from June 2020 at the OTA in Chennai, which is the only academy in the Indian Army to train women officers. Of the 198 cadets that passed out of the academy, 167 were gentleman cadets, 31 were women cadets. Five gentlemen cadets and seven women cadets from the mountain Kingdom of Bhutan also had undergone the 11-month course at the academy, along with their Indian counterparts. This is in line with India’s foreign policy of ensuring peaceful development of friendly, neighbouring countries by providing financial, infrastructural, military and medical aid.

The passing out parade at the Parameswaran Drill Square was reviewed by Lieutenant General YK Joshi, General Officer Commanding-in-Chief (GOC-in-C) Northern Command. However, owing to the COVID-19 protocols in place, there was a significant addition and a conspicuous absence at the parade this year - all cadets wore Indian Army-monogrammed masks and their proud parents watched the ceremony live on TV and YouTube from their homes.

During the Pipping, which is the final ceremony on parade day, officers take the oath in the name of the Constitution of India in the presence of Indian tricolour and consecrated by religious teachers of all faiths. This is followed by officers donning the coveted stars of a lieutenant.

After the ceremony, Lt. Nitika Kaul recalled how her journey has been marvellous and that she had learnt a lot in life, over the bygone 11 months. She thanked her mother and mother-in-law and several others for having put their faith in her and being a part of her journey.

“I feel that I’m travelling the same journey that he did. I believe he’s always going to be part of my life, even today he’s somewhere around looking at me and I can feel that he’s just holding me and saying you just did it. I Love you Vibhu” she fondly recalled her Late husband Major Vibhuti Shankar Dhoundiyal.

“Everyone please have faith in yourself, there’s absolutely nothing that can stop you from achieving what you have aimed for” is her message for all the women out there.

During 2018-2019, Maj Vibhuti Shankar Dhoundiyal’s unit 55 Rashtriya Rifles was deployed in Pulwama district in J&K and engaged in operations against the militants on a regular basis. Following the suicide bombing attack on the CRPF convoy in Pulwama on February 14, 2019, the security forces were maintaining a state of high alert, and subsequently, a massive operation was launched to nab the perpetrators of the attack.

On February 17, 2019 the security forces received credible information from the intelligence sources about the presence of terrorists in Pinglan village of Pulwama district. Based on the intelligence inputs 55 RR along with the Special Operation Group of J & K Police launched a search and destroy operation.

In a fierce 20-hour long gunfight, a number of hardcore terrorists were eliminated by the Indian security forces, whereas eleven security personnel were injured. Four soldiers including Major Vibhuti Shankar Dhoundiyal succumbed to their injuries. He was was given the gallantry award, "Shaurya Chakra" for his exceptional courage, devotion to duty, and supreme sacrifice.