Legendary actor Sridevi dies at 54 in Dubai, tributes pour in from all over the world 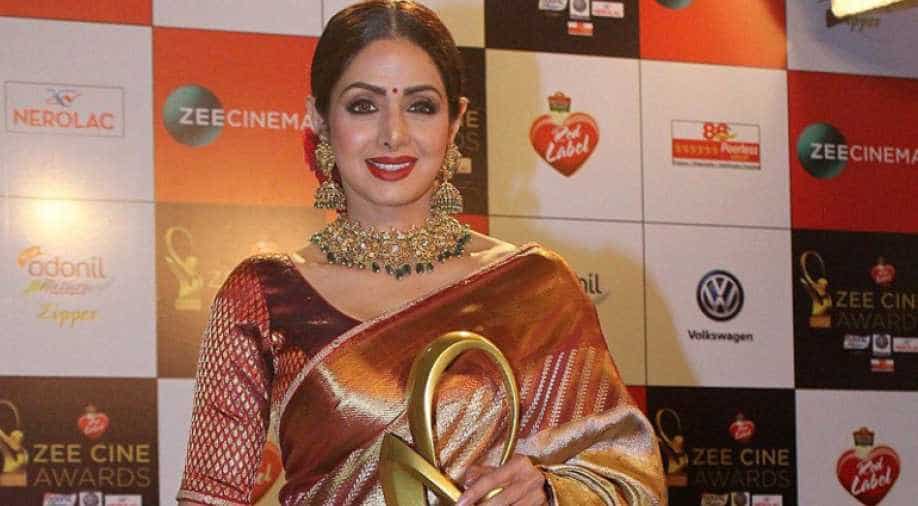 Veteran film actor and Padma Shri awardee Sridevi, who had an illustrious career spanning over four decades, passed away. She was 54.

The actor, the wife of producer Boney Kapoor, died late in the night reportedly due to cardiac arrest in Dubai, where she had gone along with her family to attend her nephew Mohit Marwah's wedding.

Confirming the news, a source close to the family said, "Yes it's true. She was in Dubai while some of the other family members came back to India. We hear it's cardiac arrest."

While some of her family members returned from Dubai after the wedding, Sridevi, Boney and her younger daughter Khushi stayed back. Her elder daughter -- Janhvi -- had not travelled with the family because of the shooting schedule for her upcoming Bollywood film, her first in the industry.

Sridevi, known for her versatility as an actor, made her Bollywood debut in 1978 with "Solva Sawan". But it was only after five years with Jeetendra-starrer "Himmatwala" that she gained commercial success.

Before her entry into Bollywood, the actor had been a known face in South Indian films. She made her debut as a child artist in in Tamil film "Thunaivan" in 1969. She also worked in Malayalam, Telugu and Kannada films.

She went on a hiatus for 15 years after starring in home production "Judaai", co-starring her brother-in-law Anil Kapoor and Urmila Matondkar. It was director Gauri Shinde's "English Vinglish" in 2012 that marked Sridevi's comeback.

Her nuanced performance as a middle-class woman, learning to speak English to feel accepted by her family, won accolades, and the film was also a commercial success. Last year, she was seen in revenge-drama, "Mom", opposite Nawazuddin Siddiqui and Akshaye Khanna. She also shot for a special appearance in superstar Shah Rukh Khan's upcoming film, "Zero", which releases in December.

Sridevi was awarded the Padma Shri, the fourth highest civilian honour, in 2013.

Minutes after the news of her death broke, many Bollywood actors like Amitabh Bachchan, Priyanka Chopra, Sushmita Sen, Sidharth Malhotra and Riteish Deshmukh took to Twitter to pay their condolences.

The first one, however, was megastar Amitabh Bachchan who in a cryptic tweet wrote, "Don't know why, feeling a strange restlessness."

"I have no words. Condolences to everyone who loved #Sridevi. A dark day. RIP" tweeted Priyanka, alongside a still of Sridevi from her superhit film "Mr India".

Deeply saddened and shocked to hear about #Sridevi Ji. My prayers and condolences to the family.

"Deeply saddened and shocked to hear about #Sridevi Ji. My prayers and condolences to the family," he tweeted.

"Really Shocked and disturbed to hear that Sridevi Maam is no more. #RIP #Sridevi," wrote Sidharth.

Really Shocked and disturbed to hear that Sridevi Ma’am is no more #RIP #Sridevi ????

Actor Shilpa Shetty's husband -- Raj Kundra -- posted, "Heartbroken by this news!! She was One of the finest kindest souls I ever knew. Speechless shocked. #RIP#Sridevi this is just not right at all! May God give all the family strength at this darkest hour."

Heartbroken by this news!! She was One of the finest kindest souls I ever knew :( speechless shocked ???? ???? #RIP #Sridevi this is just not right at all! May god give all the family strength at this darkest hour. pic.twitter.com/lBZrQjEabE

Riteish tweeted, Terrible terrible news. Am shocked beyond words. SRIDEVI Ji No More  RIP, while Sushmita wrote that she has been inconsolable since the news broke. I just heard Maam Sridevi passed away due to a massive cardiac arrest. I am in shock cant stop crying"

Actor Nimrat Kaur tweeted, Absolutely devastated to hear about the passing of #Sridevi. What a dark black terrible moment in time. Gutted.

Compelled at this unfortunate hour to be reminded of the age old idiom - चार दिन की चाँदनी, फिर अँधेरी रात ... numb at this grave untimely loss. There never was, nor will there ever be anyone quite like you. What a profoundly sad night. #TheOriginalEverything #RIPSridevi pic.twitter.com/tH04Rgzj7C

Cameron Bailey, Artistic Director, Toronto International Film Festival, tweeted, "Shocked to hear of the passing of India's legendary Sridevi. Honoured to have been in her presence in 2012 when she visited Toronto for English Vinglish. She made countless millions fall in love with her characters."

Shocked to hear of the passing of India’s legendary Sridevi. Honoured to have been in her presence in 2012 when she visited Toronto for English, Vinglish. She made countless millions fall in love with her characters. pic.twitter.com/EDhjbFDKfG

I am at a loss for words & jolted as if struck by lightening at this late hour of the night to learn about the shocking & tragic news & untimely demise of #Sridevi ji. Heartbroken. She was India’s sweetheart, an incredible artiste & a beautiful human being. Gone too soon. RIP.???? pic.twitter.com/VEIveFY4tw