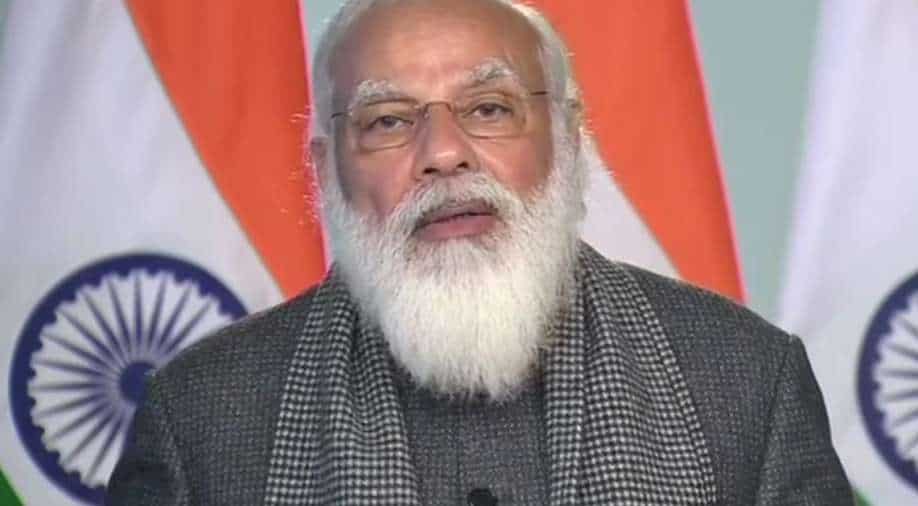 Addressing a webinar on effective implementation of the Union Budget's provisions in the defence sector, the prime minister listed a series of measures taken by his government to boost self-reliance in the defence sector and rued the fact that the country is amongst the biggest defence importers in the world

India is working hard to enhance its capabilities and capacities in the defence-manufacturing sector at a fast pace, Prime Minister Narendra Modi said on Monday as he urged the private sector to come forward for designing and manufacturing of defence equipment.

The prime minister also noted that there were hundreds of ordnance factories before independence with large-scale weapons export from the country in both world wars but this system was not strengthened thereafter.

Addressing a webinar on effective implementation of the Union Budget's provisions in the defence sector, the prime minister listed a series of measures taken by his government to boost self-reliance in the defence sector and rued the fact that the country is amongst the biggest defence importers in the world.

He said an India that has the capacity to reach Mars could have made modern weapons also, but it became an easy way to import weapons from abroad.

"But now, the country is working hard to change the situation and also to enhance its capacities and capabilities at a fast pace," the prime minister asserted.

"The condition is such that even for small arms, we have to look at other nations. India is amongst the biggest defence importers and this is not a matter of pride," Modi stressed.

On the defence budget, the prime minister said a part has been reserved for domestic procurement even in the capital budget of defence.

A total amount of Rs 4.78 lakh crore has been earmarked for the defence ministry in the 2021-22 budget, with a nearly-19-per cent increase in capital outlay.

Modi also urged the private sector to come forward and take up both designing and manufacturing of defence equipment.

He said it is not that the people of India do not have the talent or capability, and pointed out that the country did not make ventilators before the coronavirus pandemic but now manufactures thousands of those.

He said his government has relied on the capabilities of the country's engineers and scientists in developing Tejas and today, it is "flying gracefully in the skies".

Modi said with initiatives like de-licensing, de-regulation, export promotion, foreign investment liberalisation, the government has taken several measures to give the defence-manufacturing sector a boost.

He said with the establishment of the chief of defence staff post, bringing uniformity in the procurement process and induction of equipment has become easy.

The prime minister said India has made a list of 100 important items related to defence that can be manufactured indigenously with the help of local industries.

This is the positive list on which the country's manufacturing capacity is going to increase, Modi asserted.

This is the positive list that is going to reduce India's dependence on foreign countries for defence needs and it guarantees the sale of indigenous products in India, he observed.

Describing the medium, small and micro enterprises (MSMEs) as the backbone of the entire manufacturing sector, Modi said reforms that are taking place today are giving more freedom to the MSME sector and encouragement for expanding.

The prime minister said the defence corridors that are being built in the country will also help local entrepreneurs and local manufacturing.

"Self-sufficiency in our defence sector has to be seen as the empowerment of these two fronts -- jawan as well as youth," he said.