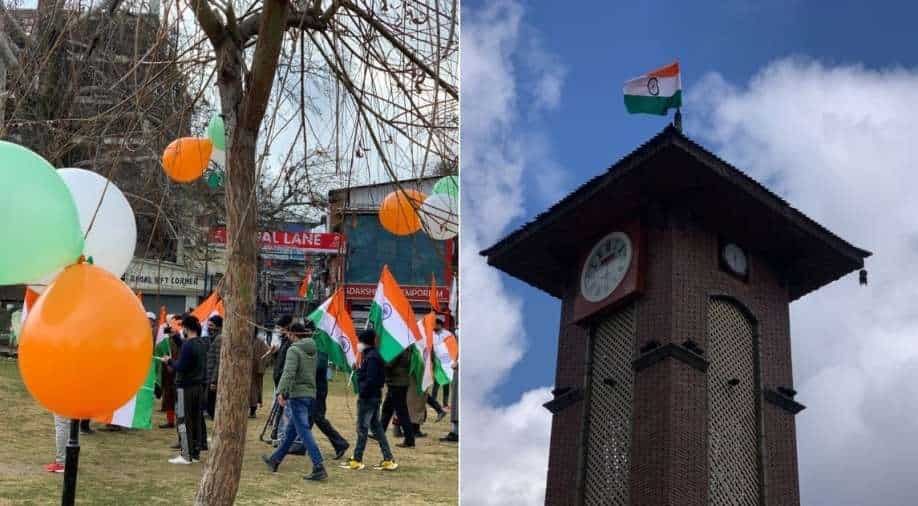 On the 73rd Republic Day celebrations, the locals along with NGO's and administration held a flag hoisting ceremony at the Lal Chowk area

For the first time in history, India's flag - the tricolour - was unfurled on the clock tower in the famous Lal Chowk area in Srinagar - a city in Jammu and Kashmir. This is for the first time after India's independence that the national flag has been unfurled on top of Ghanta Ghar (Clock Tower).

On the 73rd Republic Day celebrations, the locals along with NGO's and administration held a flag hoisting ceremony at the Lal Chowk area. Two local activists Sajid Yousuf Shah and Sahil Bashir were carried by a crane on top of the clock tower where they unfurled the flag.

"Since independence, we have only seen Pakistani flags hoisted here and those were Pakistani Sponsored elements who wanted to disrupt the peace in the Valley. Since the abrogation of article 370, we can see a lot of changes on the ground. The people were asking what Naya Kashmir means? Today hoisting the National flag on top of the clock tower is what Naya Kashmir stands for. This is what the people of Jammu and Kashmir want. We don’t want any Pakistani flags, we want peace and development," said Sahil Bashir, activist after unfurling the flag.

The clock tower in Lal Chowk has always had great importance regarding the politics of Kashmir. All the big leaders of India and Jammu and Kashmir have tried in the past to hoist a national flag on top of the clock tower but never were successful.

"Since the independence of India, this was the only place which did not have the Indian National flag. I decided to do this, and we have done it. A lot of people tried it earlier, but we were the only ones successful. As an Indian, we have unfurled the flag here and it’s given us happiness," Sajid Yousuf, activist.

On this occasion, a martial art event and students from various districts were brought to witness the unfurling of the flag. Security has been put on high alert across the Kashmir Valley especially in Srinagar city. Barricades were put up everywhere and vehicles were allowed only after checking. Mobile internet was also shut down this morning.