Group of 11 women devotees return from Sabarimala amid intensifying protests 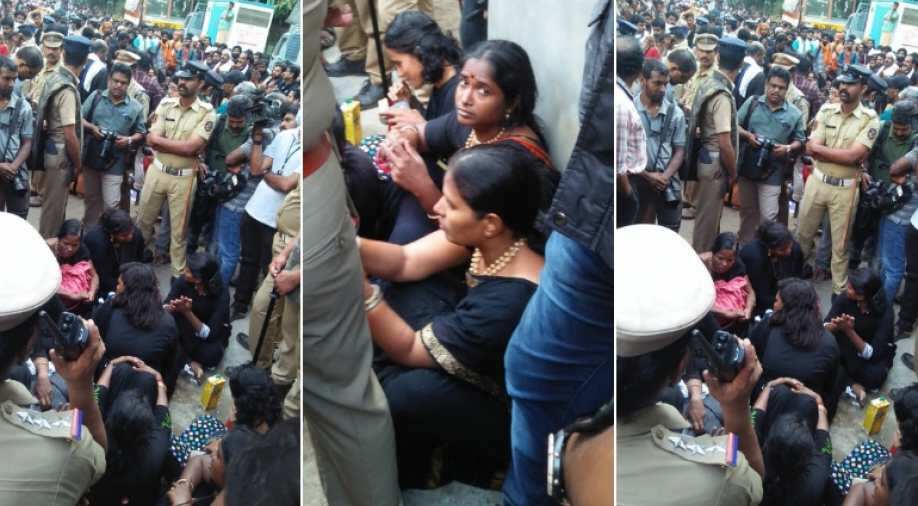 The women are members of the Chennai-based feminist group Manithi. Photograph:( ANI )

Kerala Police was forced to take over 20 protesters into custody after protests turned violent.

Special Officer, Law and Order in Pampa on Sunday stated that 11 women devotees, who had come to offer prayers at Sabarimala temple, have returned now, news agency ANI reported.

"We can't use force. It might create a law and order problem," Shaji Sugunan told media.

Tension prevailed at Pamba, the foothills of the Lord Ayyappa Temple in Kerala, on Sunday morning as a group of 11 women, below the age of 50 years, tried to trek the hilltop shrine, even as devotees protested against the move.

Shaji Sugunan, Special Officer, Law and Order, Pampa: 11 women devotees had come to offer prayers at #SabarimalaTemple but they were stopped by other pilgrims. The women devotees have returned now. We can't use force. It might create a law and order problem. pic.twitter.com/n4niymysY2

Though they attempted to trek through the traditional forest path, about five kilometres from the temple complex, they could not go forward as devotees started a "namajapa" (chanting of hymns of the lord) protest against them.

The women, members of the Chennai-based "Manithi" outfit, were seen squatting on the road. Police had thrown a security ring around them.

Kerala Police was forced to take over 20 protesters into custody after protests turned violent.

The police and the women devotees were forced to flee to safety after more protestors came rushing down the pathway.

The delegation of women devotees then agreed to return stating that the police had forced them to leave, adding that they will return and seek legal help.

Anxiety had loomed large in and around Sabarimala Temple for some days as 'Manithi' had declared last week that a group of 50 women, all below the traditionally barred age of 50 years, would visit the shrine.

Kerala had witnessed massive protests by devotees opposing the entry of girls and women in the 10-50 age group into the Sabarimala Temple since the Kerala government decided to implement the September 28 verdict of the Supreme Court permitting women of all age groups there.

Over a dozen women have so far made unsuccessful attempts to trek the holy hills.

Four transgenders, who were earlier stopped from proceeding towards the Lord Ayyappa temple citing security reasons, offered prayers at the hill shrine under heavy police security earlier this week.

The Kerala High Court earlier this month appointed a three-member committee, vesting them with powers to oversee law and order and other problems faced by pilgrims during the ongoing annual season.