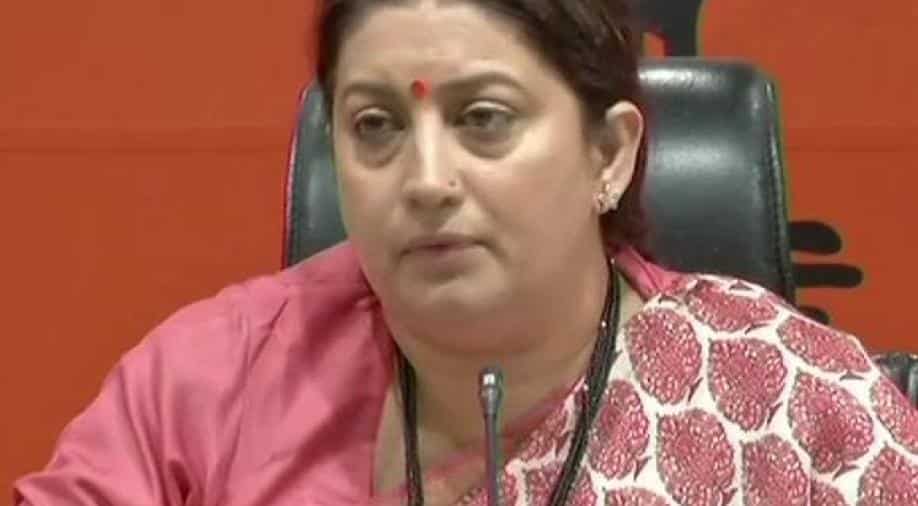 The ruling party fielded Smriti Irani to attack Sonia Gandhi and Rahul Gandhi, whom the Union minister accused of supporting terrorists in his tweet that said 'nobody killed' Shaikh and he 'just died'.

The BJP on Tuesday accused the Congress leadership of using the CBI to manufacture evidence in the Sohrabuddin Shaikh case to "politically destroy" its president Amit Shah who, it said, has come out of this "trial by fire" unscathed.

The ruling party fielded Smriti Irani to attack Sonia Gandhi and Congress president Rahul Gandhi, whom the Union minister accused of supporting terrorists in his tweet that said "nobody killed" Shaikh and he "just died".

Rahul Gandhi had tweeted this after a special CBI court in Mumbai on December 21 acquitted all 22 accused in the case of the killing of Shaikh, his wife Kausar Bi and his aide Tulsi Prajapati in alleged fake encounters by Gujarat police between 2005 and 2006 citing insufficient evidence.

Shah, who was the minister of state for home in Gujarat at that time, was also arrested briefly in 2010 in the case before being discharged in December 2014.

"It is now clear that the CBI had arrested Amit Shah in 2010 at the prodding of the Congress leadership," Irani said.

She alleged Shah was targeted by the CBI as a part of a "political conspiracy" of the Congress and its then-president because Prime Minister Narendra Modi, the then Gujarat chief minister, and Shah were seen as political rivals by the party.

"The Congress and its president used the CBI to manufacture evidence to politically destroy Shah. It is one of the finest examples of the length to which the Congress will go to destroy its political opponents," she said.

She described the case as a trial by fire for Shah and said he came out unscathed, as the country's verdict had shown that "truth cannot be destroyed".

There was no immediate response from the Congress to her allegations.

The Congress is always willing to trample upon justice and the Constitution to finish off its political rivals, Irani alleged.

Targeting Rahul Gandhi, she said his tweet was an expression of frustration that Shah came out of the case unscathed despite eight years of harassment.

Irani alleged that the Congress will not spare anybody who comes in the way of its pursuit of power which it uses not to serve people but "one family".

She noted that activist Harsh Mander, who she claimed was a member of Sonia Gandhi's "kitchen cabinet", had moved the Supreme Court against Shah's discharge.

Irani read from the Mumbai court's order that criticised the CBI probe and said the agency created evidence to suit its "preconceived and premeditated" theory to implicate political leaders.

The BJP leader alleged that Shah was arrested in 2010 on the "order" of the Congress leadership and left to "rot" in jail before he was granted bail by the court.

"The court has admitted that these cases were slapped against Shah for purely political reasons. Not only in the Mumbai High Court but also in the Supreme Court, the Congress' conspiracy got defeated, " Irani told reporters.

To a question about AgustaWestland case accused Christian Michel's speaking of "Mrs Gandhi" and making other references which the BJP has linked to the Gandhi family, Irani said sarcastically that she was not in a position to explain it as she is neither Italian and nor her son's name begins with 'R'.

She alleged that the Congress had dispatched its lawyers to help Michel whose "historical relations" with the Gandhi family are established.