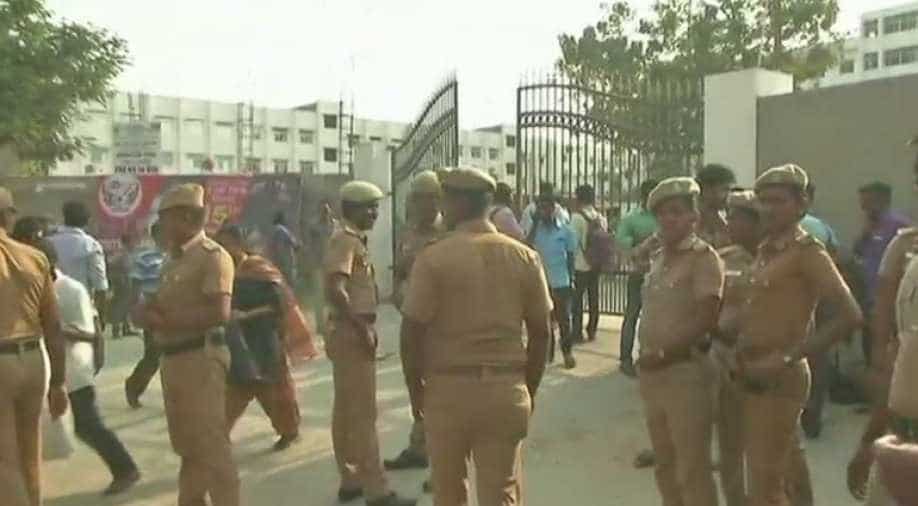 Visuals from outside Chennai's Meenakshi College Of Engineering where the incident took place. Photograph:( ANI )

The assailant has been caught and handed over to the police, media reports said

A girl student of Chennai's Meenakshi College Of Engineering was stabbed to death in broad daylight outside her college today.

The B.Com student, Ashwini, was taken to a private hospital for stab injuries but had died on the spot.

The assailant, who stabbed Ashwini with a knife after confronting and picking up an argument with her, was caught and handed over to the police.

He was identified as  Alagesan and was nabbed by bystanders and thrashed before being handed him over to police.

The motive for the murder, which sent shockwaves, was under investigation, police said.

The killing comes weeks after a woman IT professional was waylaid and attacked while heading home past midnight on the outskirts of Chennai, causing serious injuries.

Three men had been arrested in connection with the incident.

In 2016, a 26-year old techie Swathi was murdered on the platform of a suburban railway station in the city while waiting to board a train. The man arrested on the charge of killing her later allegedly committed suicide in prison.