Arun Jaitley could make any person his fan: Rajnath Singh 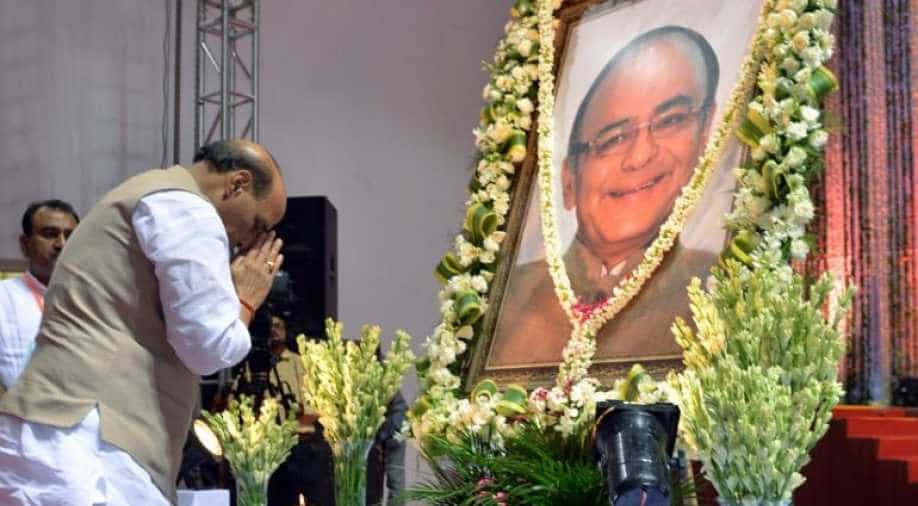 Terming his demise a loss for the entire nation, Rajnath added that his absence was being felt across party lines

Arun Jaitley had the kind of personality which could make any person he met his fan, said Union Defence Minister Rajnath Singh on Tuesday.

"I first met Jaitley personally in the 80s. Even in those days he had the charming personality and manners which could make any person his fan," Rajnath said at a condolence meet organised by BJP.

The 'Shradhanjali' programme was held at the weight-lifting hall in the Jawaharlal Nehru Stadium. Jaitley's wife Sangita, daughter Sonali and son Rohan were present on the occasion.

Praising the former finance minister's insight and acumen, Rajnath said, "He always played a big role in setting the narrative of the BJP. There was a time in the 80s when it was considered an orthodox party, but it was Jaitley who changed the narrative of the party amongst the intellectuals."

Terming his demise a loss for the entire nation, Rajnath added that his absence was being felt across party lines.

"This is not just BJP's loss, but the nation's loss as a whole, people across party lines are feeling it. He may not be here today, but I will definitely say that he will continue to shine like a star at the very top," Rajnath said.

Union Minister and Lok Janshakti Party (LJP) chief Ram Vilas Paswan also praised Jaitley's contribution towards the nation and NDA alliance by stating, "He was the one person we could always go to, whenever we were worried about the alliance. No alliance party member would ever be hesitant in front of him and he would always have the solution, such was his expertise."

Paswan also recounted an anecdote which had moved him personally as it involved his son and newly elected MP Chirag Paswan.

"I remember after Chirag's first speech in the Parliament, Jaitleyji sent him a note full of praises and wishing him luck. That set Chirag's mind on politics, once and for all, only Arunji could have had such an influence on people," Paswan said.

Jaitley passed away in New Delhi on August 24 at the All India Institute of Medical Sciences (AIIMS). He was 66. He was cremated with full state honours at the Nigambodh Ghat in the national capital on August 25.