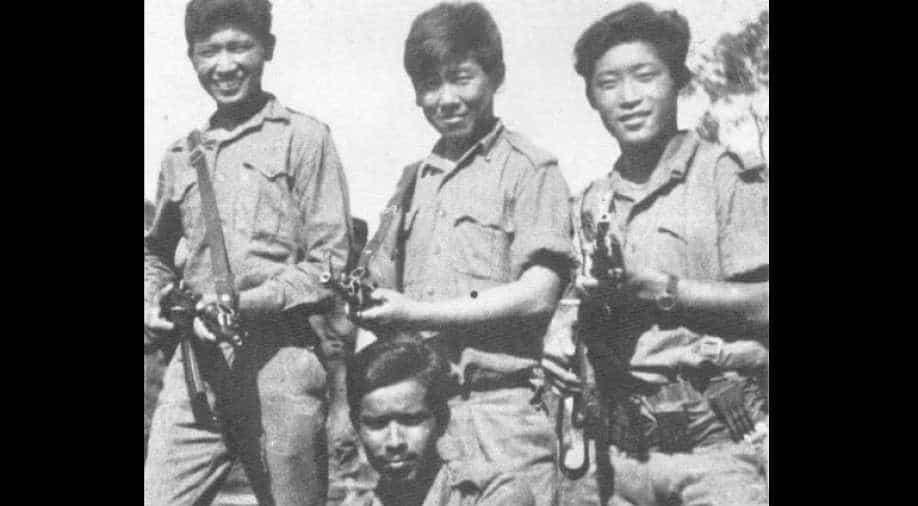 File photo of the recruits of Special Frontier Forces in Chittagong. (Pic: indianspecialforces.com) Photograph:( Others )

The Indo-China war of 1962 was over and India was still recovering from the humiliating defeat at the hands of Chinese army. The Indian Army lost over 5,000 of its men but despite all the odds, the gallant army kept their head high by showing highest level of professionalism to the world.

But the country had to look for a solution for the Chinese military's superiority and soon they found one. As the war has reached its peak, a panicked Nehru sent two letters to Washington, DC, urging them to intervene in the situation. The US used its influence to suggest a ceasefire but it had something else in mind. The 'Mustang Warriors' movement was dying due to crackdown by Nepal forces under influence of China and hence CIA wanted another trusted ally to train and keep the mighty Tibetan Army.

Very soon, the then Defence Secretary of US Mr Robert McNamara and his CIA chief John McCone flew to Delhi and met Indian intelligence officials. A division of tasks were undertaken and soon the process of creation of a Tibetan guerrilla force started under the supervision of Intelligence Bureau and CIA. A very seasoned officer of the Indian Army, Major General Sujan Singh Uban, was chosen to be the first Inspector General of the force. Since he was previously the Commander of 22 Mountain Regiment in World War II, the top-secret unit was named as 22 Establishment (Read as Two-Two Establishment).

Major General Sujan Singh Uban was considered an expert of guerrilla warfare and a notable leader. The CIA took the responsibility to provide initial support along with battle logistics like arms, ammunition etc.

Since ethnic Tibetans have been part of Indian Army since the very beginning, India recruited the fighters with the help of Chushi Gangdruk leaders and very soon the first batch of over 5,000 dreaded Khampa warriors started training under the joint leadership of Indian commando trainers and CIA at a lesser-known location of Chakrata in Uttarakhand. Soon, the organisation was rechristened as Special Frontier Force (SFF) and was put under Intelligence Bureau and later under the Research and Analysis Wing (RAW). However, as it is a mystery force, is also known as Vikas by some and the soldiers are called as Vikasi.

Very less is known about this mysterious force. Even the Indian Army officials don't know much about them, however, many them go for the deputation to the SFF. Our previous chief, General Dalbir Singh Suhag, was also the inspector General of SFF during his career. Each soldier of this force including female ones are trained very hard on the lines of a special forces commando on mountain warfare, guerrilla warfare, clandestine operations and intelligence gathering. Each one of them is a trained mountaineer, a highly trained paratrooper and, therefore, an army in himself. The secret force, primarily meant to execute clandestine intelligence gathering, special operations and guerrilla warfare against the Chinese, has tasted the actual battle several times since its inception.

Operation Eagle of Chittagong Hill tract in 1971 war is an example where SFF actively participated in the war and lost about 56 of their men including a Dapon (Brigadier). However, they not only fought fiercely but also effectively halted the escape of Pakistani forces into Myanmar which was a strategic victory for us.

In the subsequent times this force has reportedly participated in Operation Blue Star, counter-insurgency operations in Kashmir, several intelligence gathering operations in China and some other high value mission. Due to the secrecy of this force, none of these facts are out in the open.

A force of such trained people which is considered to be extremely loyal to their Dalai Lama and are ready to die for their lost kingdom of Tibet is certainly a matter of tension for China. You can occupy an area but cannot occupy the minds of the people living there. You must win them. China totally failed on this while occupying Tibet. The Tibet is free in the mind and soul of every Vikasi whenever they sing their Vikasi Song. The English translation is given as below:

We are the Vikasi
The Chinese snatched Tibet from us
and kicked us out from our home
Even then, India
kept us like their own
One day, surely one day
we will teach the Chinese a lesson
Whenever opportunities arise
we will play with our lives In the Siachen glacier
we got our second chance
Our young martyrs
have no sadness whatsoever
Whether it is Kargil or Bangladesh
we will not lose our strength
Whenever opportunities arise
we will play with our lives
Where there is our Potala Palace
and lovely Norbu Lingka
The throne of the Dalai Lama
was dear even then
Remember those martyrs of ours
who sacrificed with their lives
Let’s sing together
Hail to our Tibet!
Hail to our Tibet!