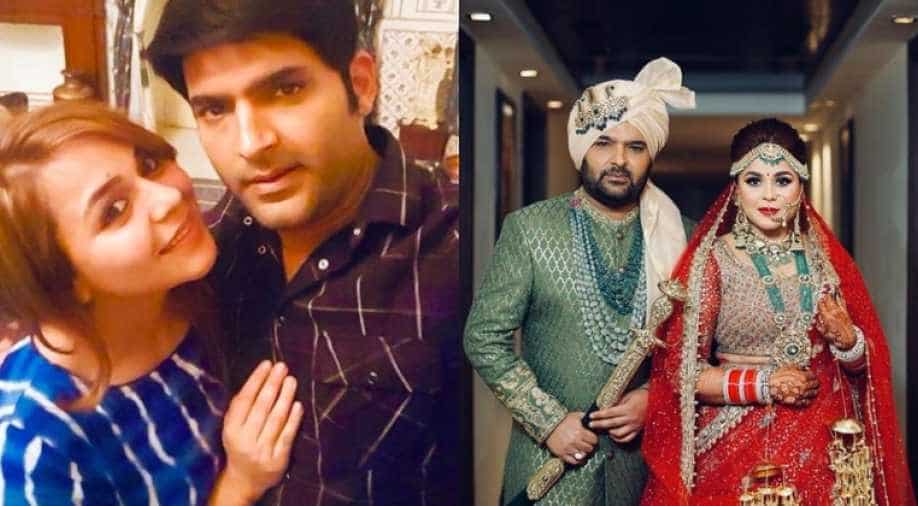 Their wedding was preceded by days of ceremonies and pre-marriage rituals, including a sangeet which saw their friends dance the night away.

TV star and  comedian Kapil Sharma is now officially married. The popular TV host tied the knot with his lady love Ginni Chatrath in Jalandhar at a traditional Punjabi ceremony, which was enlivened by popular singer Gurdas Maan.

Kapil shared their first wedding picture himself via Instagram, with an emoticon with folded hands in gratitude for the love and blessings from all over.

Kapil made a late entry at the wedding venue, which was done up in red and gold.

The bride stuck to the traditional for her attire, and accessorised her look with maatha patti, nath and statement earrings and a layered neckpiece.

Kapil sported a green sherwani, with string adding some drama to his look. His triple kalgi on the turban and sword grabbed attention, as did his bearded look.

The venue had ample security considering Kapil is an established name in the industry and has a huge fan following. Invitations to the wedding itself had a barcode for entry.

Guests were served Punjabi and Thai cuisine. The star attraction was a performance by Gurdas Maan.

The 'Comedy Nights With Kapil' star and Ginni wanted the wedding to be rooted in their culture which is why they chose Jalandhar for the wedding venue. Many of Kapil's co-stars and fellow comedians attended the wedding including Sumona Chakravarti and Krushna Abhishek.

Their wedding was preceded by days of ceremonies and pre-marriage rituals, including a sangeet which saw their friends dance the night away.