Taapsee Pannu, Bhumi Pednekar team up for Anurag Kashyap’s next 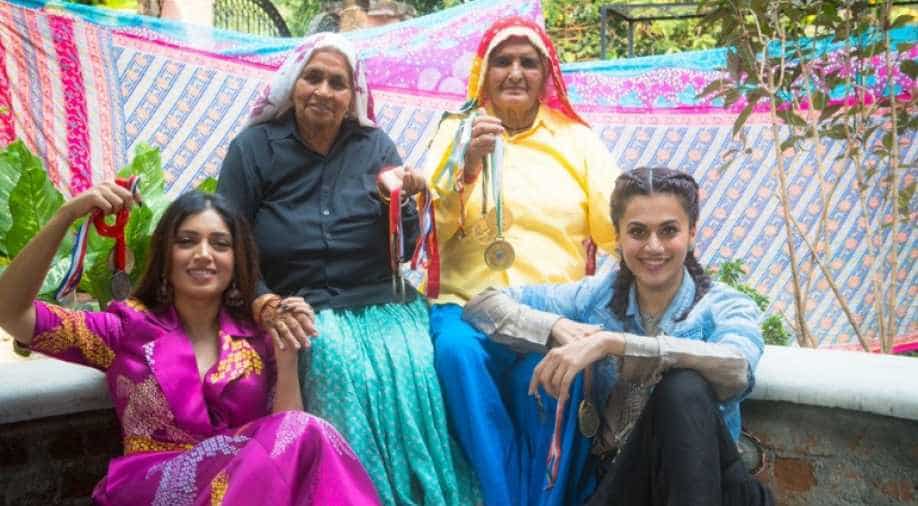 Taapsee and Bhumi will be sharing the screen space for the first time. Photograph:( Twitter )

The film is based on Chandro and Prakashi, who are from Uttar Pradesh`s Johri village and reportedly took up sharpshooting in their 50s.

Bollywood actors Taapsee Pannu and Bhumi Pednekar are all set to star in Anurag Kashyap’s next production.The two will be seen playing the world’s oldest sharpshooters, Chandro Tomar and her sister-in-law Prakashi Tomar in the upcoming film.

The film’s team took to their Twitter handles to share the news. Taapsee shared a picture featuring her with Bhumi, Anurag, the director of the film Tushar Hiranandani and the sharpshooters. The two sharpshooters can be seen holding medals in their hands while smiling for the camera. Bhumi too is seen holding medals while Taapsee can be seen smiling, making a gun pose with her hand.“Kabhi humaari picture shelve karva dete hai kabhi title ki maara maari, maine socha main Khud hi picture announce kar deti hu through my PERSONAL MEDIANET ab jisko jo ukhaadna hai ukhaad lo ! Kickstarting the shoot of our country’s oldest and coolest shooters #Chandro #Prakashi,” she wrote in her post.

Bhumi also shared the same picture, writing, “Old is Gold and this is certainly GOLD! Excited to begin the shooting of this groundbreaking real story of world`s oldest sharpshooters.”

Old is Gold and this is certainly GOLD! Excited to begin the shooting of this groundbreaking real story of world's oldest sharpshooters!@taapsee @tushar1307 @anuragkashyap72 @RelianceEnt @nidhiparmar pic.twitter.com/HK8Q4ULBrc

According to trade analyst Taran Adarsh, the film will mark writer Tushar Hiranandani`s debut as director. It will be jointly-produced by Anurag Kashyap and Nidhi Parmar.

The filming is supposed to commence next week.Other details about the film are kept under wraps. The film is based on Chandro and Prakashi, who are from Uttar Pradesh`s Johri village and reportedly took up sharpshooting in their 50s.

Chandro is fondly called as shooter `dadi` and is among the world`s oldest female sharpshooters.Earlier there were rumours about the film getting shelved as mentioned by Taapsee in her tweet.

However, Anurag had dismissed all such reports by telling a publication that the shooting of the film will commence on February 10.Apart from this film, Taapsee will next be seen in ‘Tadka’, ‘Badla’ and ‘Mission Mangal’, whereas Bhumi will appear in ‘Sonchiriya’, ‘Dolly Kitty Aur Woh Chamakte Sitare’ and Takht.